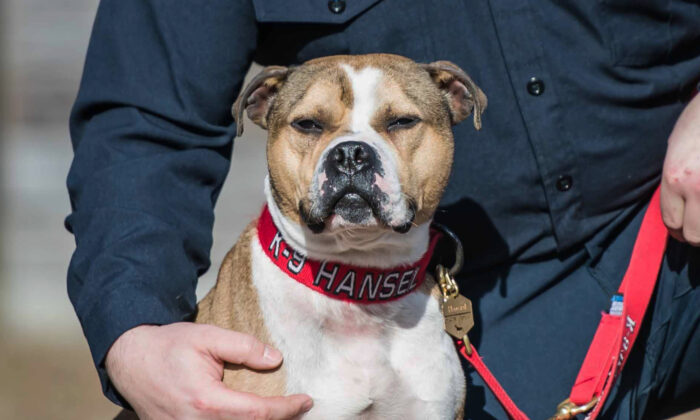 Despite pressure from police investigators and non-profit animal advocacy organizations, the barbaric practice of raising pit bulls for dog fighting is still widespread across North America. But the tragedy of dog fighting has turned into a triumph for Hansel, the first pitbull arson-detection K-9 in the United States.

Rescued from a Canadian dog-fighting ring by Ontario Society for the Prevention of Cruelty to Animals (OSPCA) in 2015 and put through a rehabilitation and training program by the Philadelphia non-profit Throw Away Dogs, Hansel has become an integral part of the team at the Millville Fire Department in New Jersey.

Firefighter Tyler Van Leer was the one who came up with the idea of adding an arson K-9 unit to the firehouse and has taken responsibility for Hansel’s integration. “It was like an instant bond—his little head poked around the corner and it was like an instant connection. You could feel it,” the dog’s handler told ABC.

But none of this might ever have come to pass if it weren’t for a series of activists and organizations who gave this abused dog the chance at a decent life. His mother was one of over 30 pit bulls rescued from the dog-fighting ring. The OSPCA filed a petition to have some of the dogs euthanized for fear that they would never be able to live safely under normal conditions.

Thankfully, Hansel’s mother and the others were spared by a worldwide social media campaign called #Savethe21. Hansel and his sister Gretel were taken in by another organization, Throw Away Dogs (TAD), which specializes in rescuing dogs that have been deemed dangerous or difficult cases.

The organization then trains the dogs for careers in K-9 roles alongside human first responders across the country. Hansel received a full 12 months with TAD before being given to the Millville Fire Department. Then together with his handler Van Leer, he went through the police K-9 academy, focusing specifically on arson detection. Over a period of 16 weeks, Van Leer explained to ABC, Hansel was “trained, or imprinted, on 14 different ignitable liquids.”

As for how Hansel is adjusting to life as a K-9 first responder, Van Leer says he seems perfectly at home in his new environment. “Whenever I ask him, ‘Are you ready to go to work?’ and bring out the harness, he starts doing laps around the crate,” the firefighter told CNN.

All the activity and commotion of the station, with trucks and firefighters coming and going, seems to suit the energetic dog just fine. “The firehouse is no strange place to him,” Van Leer said. “He was there with me prior to the academy, getting used to the bells and whistles going off and everything.”

Hansel has also won the hearts of the other firefighters at the station, who value his unique skills. “Everyone here are at the firehouse loves him. He is just an awesome dog,” Van Leer adds.

The many people who were involved in Hansel’s journey have high hopes that he will serve as a model for other pit bulls that are targeted by the underground, criminal world of dog fighting or are stigmatized as an inherently dangerous breed.

Throw Away Dogs founder Carol Skaziak told ABC that Hansel’s rehabilitation and placement are “so important for this misunderstood breed as I don’t think there is any other pit bull arson detection K9s in whole country.”

Van Leer also recognized the importance that the K-9 police community played in the successful project, as well as his chief who immediately recognized the asset that Hansel would be for his team. “The journey has been really fun and it’s just going up from here,” Van Leer said.