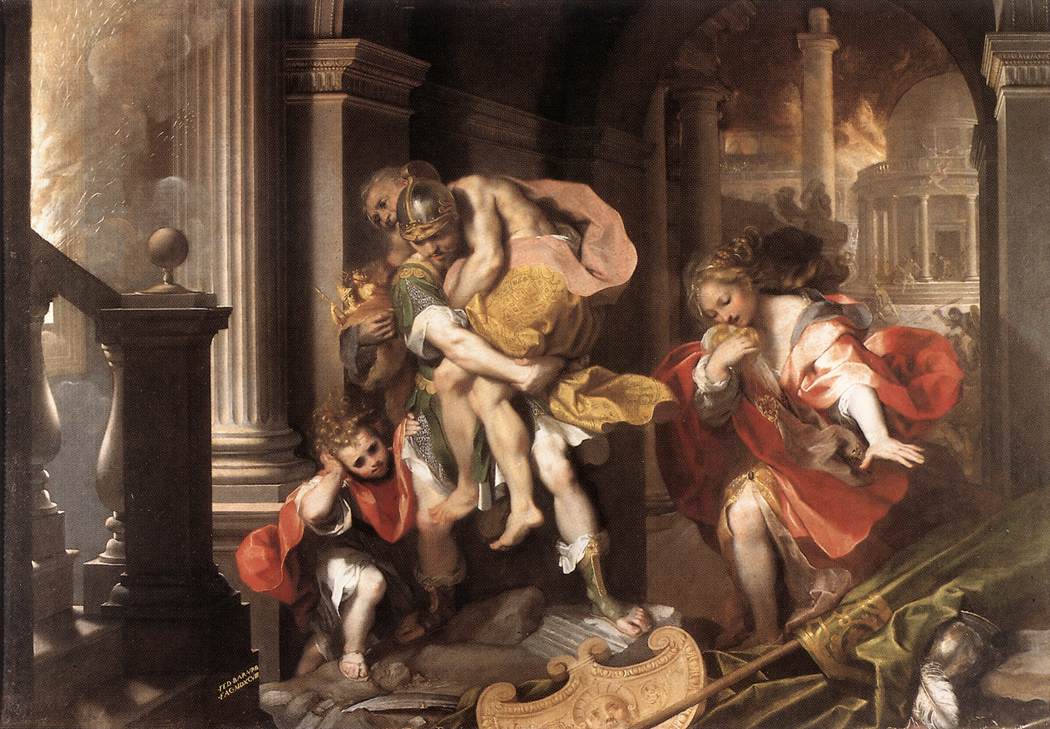 Those three words—“I sing of arms and the man”—open one of the great classics of Western literature, the “Aeneid.” Commissioned by the emperor Augustus to write an epic about the founding of the Roman people, Publius Vergilius Maro, known in English as Vergil or Virgil, created a poem in which he takes the hero Aeneas from the conquest of his native Troy to the Italian Peninsula, where his descendants will found the city of Rome.

Using as his model Homer’s “Iliad” and“Odyssey,” Virgil re-creates the fall of Troy; Aeneas’s wanderings about the Mediterranean; his love affair with Dido, queen of Carthage, the city that would one day become Rome’s deadly enemy; and the hero’s eventual landing on the shores of Italy, where he wages war to secure a homeland for his people.

Here is an extraordinary work. In these 9,896 lines, almost all of them written in dactylic hexameter, Virgil creates a hero with whom we can identify. He’s a man who trembles with fear during a storm yet has the courage to enter Dis, the underworld, to visit his father. Aeneas loves Dido, but when the god Jupiter orders him to abandon her and resume his travels, he goes about his preparations secretly, concealing his intentions from the queen, like many a fearful man slipping away from a woman.

And in Dido, Virgil gives us a woman who comes alive even in modern times, a powerful female who fights to found and build Carthage, a queen who directs a hundred projects yet remains a woman who can give herself completely to the man she loves.

The “Aeneid” became a sort of Bible to the ancient Romans. Well into the Renaissance, some readers even used it to practice stoichemancy, randomly opening the book and reading a passage to predict future events.

Its influence on literature was vast. Augustine as a young man wept over the death of Dido. And, of course, Virgil is the spirit who accompanies Dante through Hell and Purgatory.

The “Aeneid” also acted as a mirror for Roman males. They could gaze into that glass and compare themselves to this ancient hero. Were they worthy of empire? Were they stouthearted? Did they practice, as did Aeneas, certain virtues? Did they pay homage to tradition and to the gods?

Like the Romans, we moderns can also take lessons and inspiration from the “Aeneid.” Here are just a few of them:

Virgil links this word to Aeneas as early as line 10 in the poem, and several times refers to his hero as Pius Aeneas. Our word piety derives from “pietas,” but usually we associate piety with religious practices. Whereas to the Romans, pietas had a much deeper meaning: reverence for the gods, yes, but also the honoring of family, custom, and tradition.

This concept of pietas resounds throughout the “Aeneid.” During the tumult of their escape from Troy, for example, Aeneas brings his father, Anchises, his son, Ascanius, and the household gods, the Penates, to safety but is separated from his wife, Creusa. He returns to the burning city, looking frantically for her. Having died, she appears to him as a ghost, commands him to leave her, and to find his way to Italy and to remarry.

In a much later incident, while visiting the Underworld, Aeneas again displays the pietas bred into his very bones. He sees that some souls are not permitted passage across the River Styx. The Sybil informs him that these are souls who have failed to receive the customs and practices of a proper burial. When Aeneas spots Palinurus, his helmsman who died from drowning, he deeply grieves for his fallen comrade.

For the Romans, “virtus” meant practicing the ideals of manhood: courage, a strong character, and a desire to excel. Aeneas embodies virtus. He is a man of “dignitas,” a courageous warrior who treats others with respect, puts his followers ahead of his own interests, and obeys the will of the gods and fate.

Virgil describes him as “a man apart, devoted to his mission.” As the poem progresses, we see Aeneas grow in that role, hiding his despair at times from his men and offering them encouragement by word and example.

Aeneas was not perfect. He was impetuous at times, temporarily lost his vision of a homeland in his entanglement with Dido, and refused mercy to Turnus, the leader of his enemies in Latium. To the Romans, however, Aeneas as created by Virgil undoubtedly seemed a near-ideal man and leader.

Aeneas’s reverence, his pietas, for the past and the future is symbolized in the wonderful picture Virgil paints of his escape from Troy. In addition to taking the Penates with him on this flight, he carries his father on his back and holds the hand of his son.

The Romans paid homage to their ancestors, keeping shrines to them in their homes and celebrating them during “Parentalia,” when they would visit the graves of those who had gone before them and pour libations of wine into the earth. They also cared deeply for their children, with the wealthier families seeing to it that their sons and even some of their daughters received as good an education as possible.

Here we have only scratched the surface of what can be gained from the “Aeneid.” If you decide to tackle this classic, I would suggest the Robert Fagles translation, which I used with my Advanced Placement Latin students. If you lack the time to read the poem in its entirety, the first six books are considered by most scholars to be the best.

On his deathbed, and with the “Aeneid” still unfinished, Virgil requested that the manuscript to be burned, considering it unworthy of publication. Augustus overrode that request and ordered the book published expeditiously and with as few editorial changes as possible, thereby giving the rest of us an irreplaceable treasure of Western civilization.