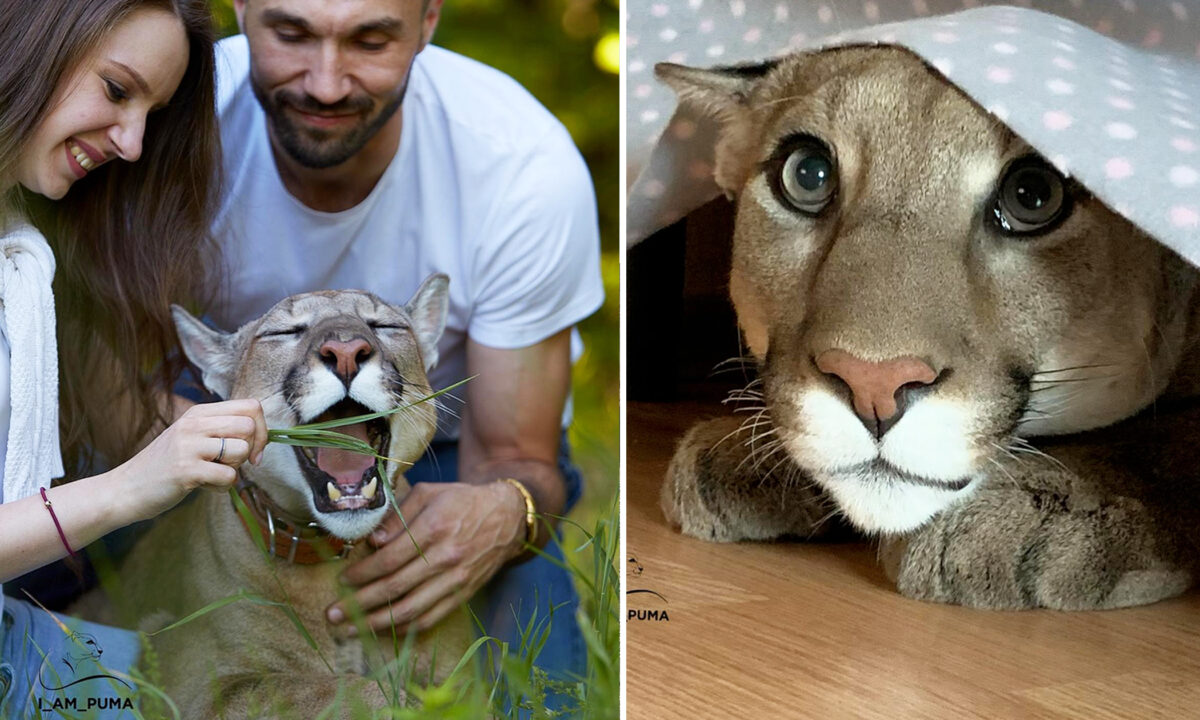 (Courtesy of I am puma and @l_am_puma)
Animals

PHOTOS: Rescued Puma Can’t Go Back in the Wild, Enjoys Life Like Any Big House Cat

Messi the puma lives a fantastic life with his human owners, Sasha and Masha, in their home in Russia. But had the young couple not adopted Messi from a petting zoo when he was a year old, things would’ve been very different for the big cat.

Sasha, 42, and Masha, 33, discovered Messi living at the Russian zoo and saved the big cat from a stark existence. They were told that the puma has some health issues and would need extra care. Well aware of the commitment involved, they managed to negotiate a price for him, and now he is the family’s beloved big old cat, along with their cheetah, Gerda.

Messi is one of the three cubs born in 2015 in the Saransk Zoo, in Penza; the cubs were named after famous football players, as Saransk was proposed to be one of the cities to host the 2018 FIFA World Cup; Messi was named after Lionel Messi.

The regal but incredibly sweet Messi is especially close to Sasha. “Messi has a special connection with Sasha,” Masha told The Epoch Times. “They are inseparable. They both can’t live without each other.”

Videos shared online of the striking-looking Messi have amassed millions of views. His daily adventures trying out new toys and snacks, playing hide and seek, and snuggling with the people who love him have captured hearts the world over.

The family’s typical day starts at 5 a.m., when Messi gets up and asks to go for a walk or just comes to show his love. “He purrs and licks Sasha, leans on him with his whole body, and rubs against him,” Masha said.

The couple take turns getting up to feed Messi and Gerda, and to let them out for walks. Then Sasha and Masha have breakfast and go to work, while their puma and cheetah sleep all day. No matter how soundly Messi sleeps though, when Sasha leaves the house, he will jump up and restlessly start looking for his beloved human.

Almost three years ago, Sasha and Masha relocated out of their city apartment with their animals to a house with outdoor space and more room. They often receive offers to rehome Messi in a forest or reserve, but the puma’s health condition prevents him from living outdoors in the wild. Messi is also comparatively much smaller than the average pumas in the wild.

Extremely affectionate, Messi never bites or destroys furniture. He adores being stroked, and eats a properly balanced meat diet. “Messi is like a child to us. He’s a family member. He gives joy simply by his presence in our lives,” Masha said. “He’s also a true, loyal friend.”

The couple warn against others adopting a big cat, however, advising that doing so can be dangerous, and stating that Messi’s nature is unique. “Everyone who has had experience with predatory cats—tigers, lions, and leopards—they all tell us that an animal with such a character is born once every 100 years,” Masha said.