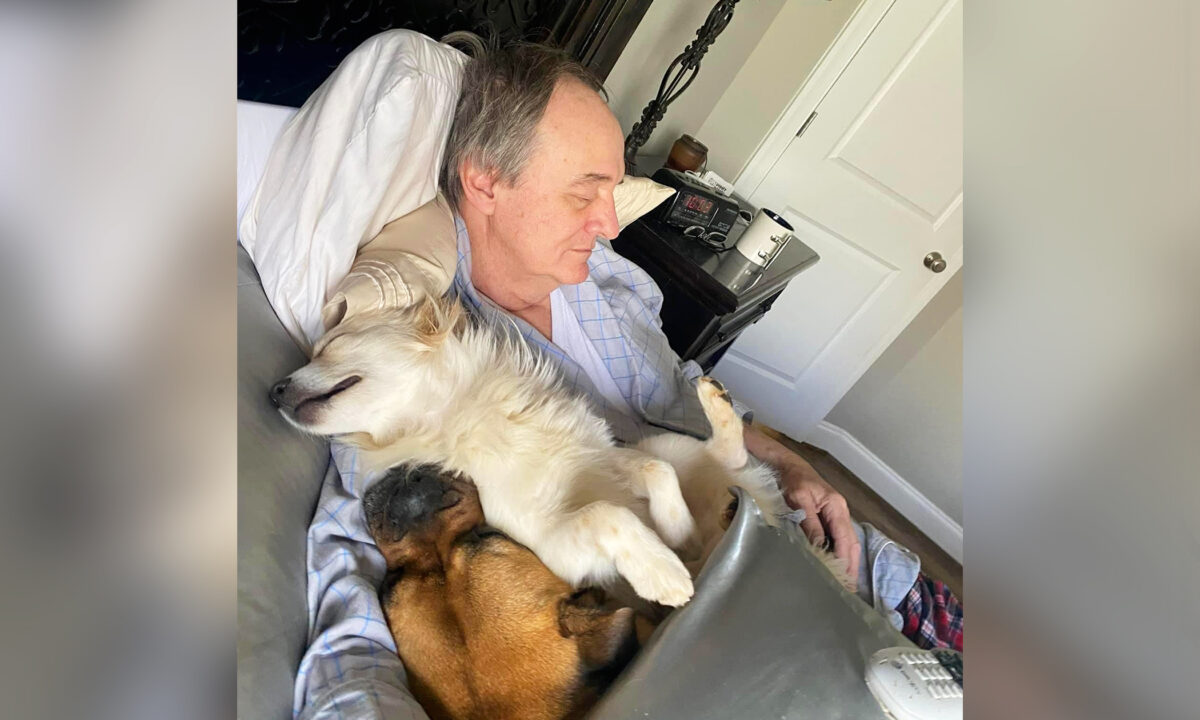 A few furry friends often hop in to snuggle up with their darling human Lon Watson whenever he closes his eyes to take a nap on the couch. But these aren’t Lon’s pets—they’re strays and neighborhood dogs who take any opportunity to wander in and sleep with their beloved person.

“My dad has rescued animals my entire life,” said Catey, 39, from North Alabama. “My dad is these dogs’ ‘person.’ He makes sure they have vet care, flea and tick protection, and baths.”

A mom of four, Catey lives in Greystone and works as a contractor for delivery service FedEx Ground, while her dad and stepmom, Carrie, live in McCalla. Carrie is the one who photographs all the visiting dogs and their activities with Lon, including their now-famous naptime.

Apart from the regular furry visitors, Lon’s canine crew also has some “failed rescues,” meaning the dogs he never adopted out. There’s beagle-mix Lily Grace, brought to him with severe mange. And pit-mix Lucky, found with an embedded collar. “Dad has had him the longest, over 10 years. When Lucky was found, he had been abandoned for so long his neck had begun to grow around his collar and required surgery,” Catey said.

Then there’s Sully, a mastiff who was “about 30lbs underweight” and found wandering the streets close to Lon’s business, digging through trash cans and dumpsters. “He weighs about 150lbs [now] and howls if my dad leaves the room,” she said.

Recently, Lon had to say goodbye to “sweet bulldog” Sluggo after nine years, having rescued him from a house he was left in for two years, after it was destroyed by a tornado.

It all started about five years ago.

Catey recalls getting a text from Carrie with a photo showing their first furry visitor.

“My dad was wrapping Christmas presents in the guest room and a random dog nobody had ever seen was just sitting on the bed watching him,” she recalled. “And my dad just proceeded like it was completely normal to have strange dogs enter your house and get on the furniture.”

The wandering dog, named Hooch, has been a regular visitor ever since, often sleeping on Lon’s bed with him. The family aren’t sure where Hooch comes from, noting that he seems to bounce between houses within the semi-rural community.

Along with other stray neighborhood dogs, Lon looks out for him, and they share a bond.

Often, when Lon arrives home from his job at the machine and fabricating shop he owns in Birmingham, one or more dogs are waiting for him. One of them is the sweetheart Fluffer Nutter, who belongs to some local residents.

“Fluffer Nutter’s people are very nice and they see him run toward dad when he pulls in the driveway, and let him come over for snuggles,” Catey said.

The houses are set quite far off the street in their more rustic part of McCalla, said Catey. “A lot of residents don’t contain their dogs, so nobody seems to mind if their dog wants to hang out with Dad,” she added.

Catey said that if her father knew the reaction the photos of him napping with the dogs had drawn on social media, he would be very surprised.

“My dad has no idea how much attention his story has gotten,” she said. “He is not present on social media and does very little on the internet that is not work related.”

Lon is a true animal lover. There have been so many strays picked up over the years in the Watson household, it’s hard to count. Mostly, it’s been dogs, but Catey remembers cats, birds; even a chipmunk. He has fostered for Two by Two Rescue and Pound on the Hill Animal Rescue in the past. The work with rescues started after Lon married Carrie, and the couple would foster animals until they could be placed. Some were never adopted out, and the permanent resident dogs are all rescues.

It seems Lon just has a way with dogs, who clearly adore him in return, and can’t wait for naptime.