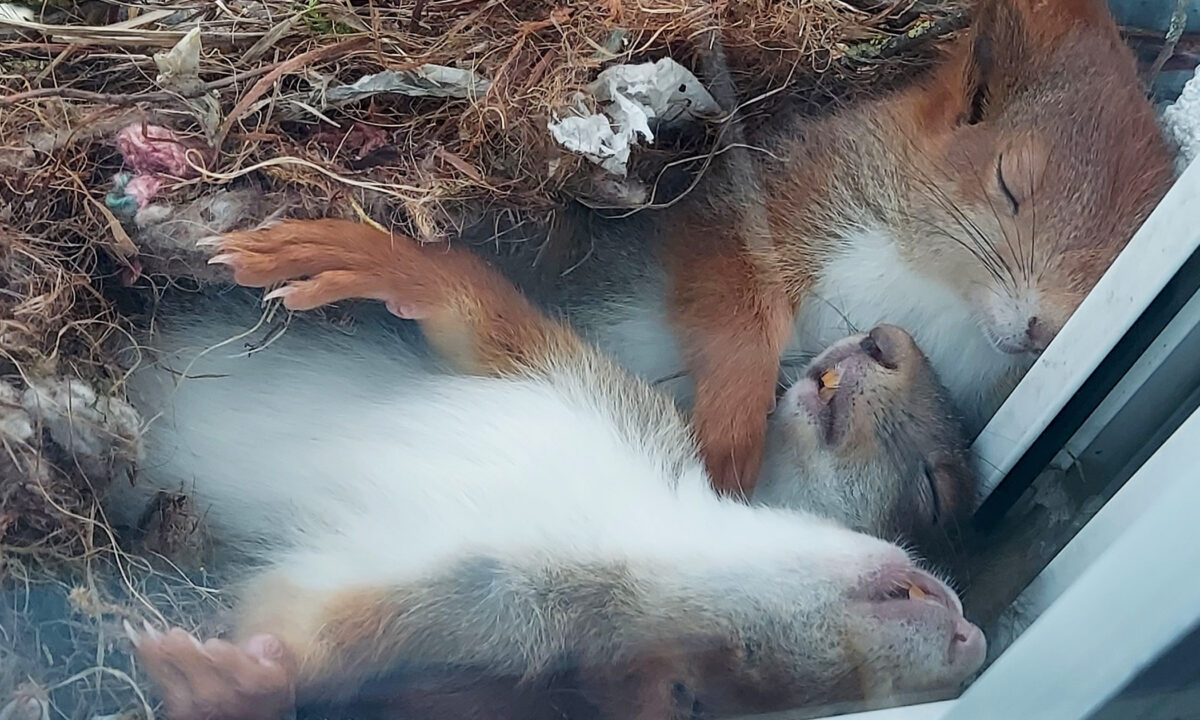 Amateur German photographer Ludwig C. Timm snapped the most adorable images of squirrels sleeping after they moved in right outside his own home.

At first, Timm and his wife noticed just a few small twigs appear outside their bathroom window. But as time went on, the little pile grew, and it became clear a furry family was setting up house.

“We thought the wind was blowing the twigs onto the windowsill,” Timm, 62, told The Epoch Times. “Then it became more branches, moss, grass.”

The couple became fascinated when they spotted a female squirrel busily building a nest on the ledge, safely held in place by a railing. A few months later, three tiny squirrel babies arrived.

Cohabiting in such close proximity meant that the Timms got to see the daily comings and goings of their lively neighbors. So as to observe without disturbing them, Timm, a former judge, set up an automatic camera on the windowsill.

Mostly, the couple would just see the female squirrel scurrying up the wall of the house, located in a small German village in the western state of Rhineland-Palatinate. But some days brought more thrills and spills. Birds, including sparrows, would arrive to steal materials from the nest for their own building projects, and one day, an accident happened.

“One day, we were very frightened,” Timm recalled. “One of the little squirrels fell from the nest 10 feet down and landed on our doormat.”

The small creature remained motionless until its mother came.

With a stroke of luck, the amazingly touching moment mother and baby were reunited was caught on camera.

Timm shared that another time, when summer temperatures were high, he heard his wife calling him to come quickly, and bring his camera.

“It was a very hot day and the young squirrels were probably too hot to sleep in the nest, so they lay on top,” he recalled. “Because I had to hurry, I picked up the mobile phone and took the photos through the window.”

The resulting images are perfect, but Timm, whose parents gave him his first camera in 1978 when he was an exchange student in New Jersey, is modest about his skills. “I’m not a photographer—just an ambitious amateur,” he said.

Not much of a social media user, Timm says he rarely posts his pictures. The nap-time scene was such a once-in-a-lifetime shot however, he made an exception.

“I thought it was so sweet, I should do something I usually rarely do; I shared the photo on Facebook,” he said.

Timm’s and his wife’s photography work can be found on FotoCommunity, Adode Portfolio, and their website.