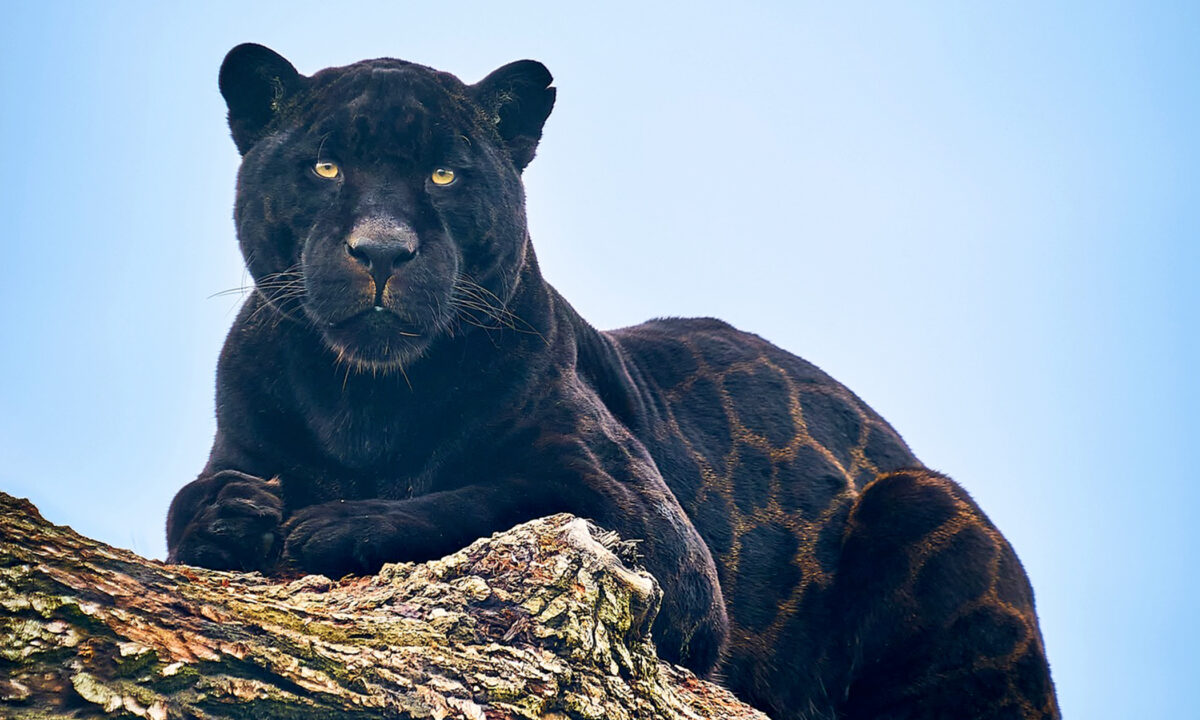 (Courtesy of Cam Whitnall via The Big Cat Sanctuary)
Animals

Neron is a magnificent black jaguar with beautifully rare markings. His otherworldly coat, a velvet display of rosettes, has won many hearts at The Big Cat Sanctuary.

All black jaguars have rosettes—rose-like markings found on the fur used to camouflage—but only a small number have markings as bold as Neron’s. Like printed silk, his coat glistens.

“Neron’s rosettes are particularly remarkable as they are much lighter on his tail end, gradually darkening towards his head,” Harry Cooke, a spokesperson for The Big Cat Sanctuary, told The Epoch Times.

Four-year-old Neron was born in Artis Zoo in Amsterdam, joining the UK sanctuary in 2018 as part of the European Endangered Species Breeding Program for jaguars. It was recommended he breed with the female jaguar named Keira, who just turned 5.

Cooke said that when Keira first met Neron at The Big Cat Sanctuary in Kent, UK, it was love at first sight. “We observed very playful, flirtatious behavior when they were first introduced in 2019, and their love for one another blossomed as they began living together,” he said.

Keira and Neron make a most striking jaguar couple, and the pair are now proud parents to 1-year-old Inka, born at the sanctuary in April 2021.

When together, Keira clearly brings out his softer side. The pair are often seen grooming each other and displaying their affection. Following the birth of Inka last year, Neron and Keira are currently kept separate at the sanctuary.

“This is to keep all the jaguar family safe just whilst Inka grows up,” Cooke explained. “We are hoping to reintroduce Neron back into the family fold soon.”

While her jaguar father is cool and calm, Inka’s disposition is different.

“She is quite the opposite of Neron, very lively and energetic!” Cooke said. “She is developing really well, and we look forward to watching her grow into adulthood.”

Located in the countryside, the sanctuary is a peaceful, tranquil refuge for endangered cats, both large and small. The team said they were “over the moon” to welcome Neron into the fold, particularly given his majestic appearance. In the wild, around 1 in 10 jaguars are naturally found to be black. Their color is caused by a genetic anomaly known as melanism, which results in dark pigmentation. It can give the animal an extra stealthy appearance.

“Neron is a quiet, gentle jaguar and is beautiful both inside and out,” Cook said. “Beneath his large and strong exterior, he has a heart of gold.”

There are other jaguars living at the sanctuary, which carefully welcomes visitors on a prearranged basis. Does Neron interact with the other cats?

“Neron has not directly met the other jaguars on the site, but does live opposite Athena and Sofia, who he does occasionally communicate with. He only has eyes for Keira though,” Cooke said.

(Courtesy of The Big Cat Sanctuary)