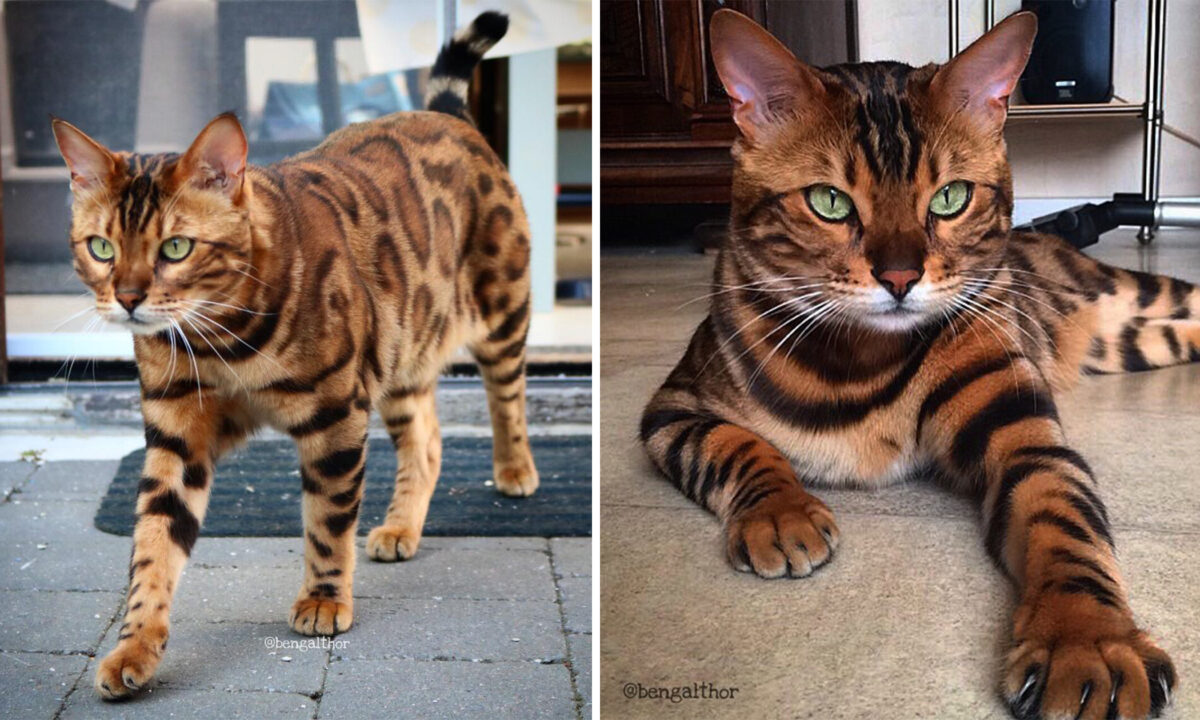 PHOTOS: Bengal Cat’s Majestic Coat Makes Him Look Like Half Tiger and Half Leopard

Thor the Bengal cat has one of the most beautiful coats you’ll ever see. With stripes on his head and spots on his back and belly, Thor looks like a leopard-tiger cross. His owners say he’s a massive character, too.

Owing to his magnetic looks and personality, the 9-year-old feline is famous the world over and has done photo shoots and appeared on television.

“When the sun shines on his fur, you can see a little bit of a ‘golden’ glow,” the cat’s owner Rani Cucicov, 27, told The Epoch Times. “He’s extremely vocal, and very good at expressing his emotions.”

Such is his personality and aesthetic appeal that someone in Dubai offered to buy Thor for 100,000 euros. Cucicov declined. “Thor is our family member and we wouldn’t sell him, ever,” she said.

When their cat is not amused, or hungry, or wants to play, Thor’s family, who live in Belgium, know about it. His favorite thing, they say, is scampering in the garden and taking naps while getting belly rubs.

Thor’s family found him in 2013 when he was still a tiny kitten living at the Bengal Cattery in the Netherlands. They originally set their sights on another cat, but the cattery owner told them they had another Bengal up for adoption. Baby Thor would’ve been a show cat, but due to a small imperfection—a bump in his tail—he was not fit to partake in shows.

“The moment we saw him, we fell in love. It just felt so right. He was a kitten with a strong personality and we felt he would fit our family perfectly,” Cucicov said.

At 5 months old, the young Thor took to sleeping with his new family members from the moment he came home. They had a dog at the time, and after a slow introduction, the two became best friends, though when the kitten became too boisterous for senior dog, they’d be separated to give the dog some peace.

Bengals need a lot of space and scratching facilities, so the family got him a huge scratching castle, and some smaller scratching posts. Cucicov and her family also took a lot of time to play with him—and still do.

“It’s really funny,” she said, “because sometimes it feels like he’s my little brother. Thor sees my mother as his ‘mum,’ and me and my brothers are his play mates.

“I know what he likes and what he doesn’t. He knows the camera, and if he’s not into it, it’s not going to happen. We only have one rule: we never force Thor to do something he clearly doesn’t want.”

One day, after casually starting an Instagram account, @bengalthor, to keep family and friends up to date with the cat’s adventures, Cucicov got a message.

Things happened fast. Thor’s followers went up by thousands every hour, and Cucicov received interview requests from all over the world. “Really funny to see your cat lying next to you on the sofa, while the whole world is loving him so much,” she said.

Garnering so much social media attention could be great fun like some of the social media comments that they received so far have been interesting. “In the beginning, a lot of people didn’t believe Thor was real; they said I just photoshopped the head of a tiger on the body of a leopard,” she said.

But what Cucicov most loves about Thor is something simple: when he’s napping and he hears them enter the room, he adorably lies down on his back with his paws up to signal that they need to give him some good belly rubs.

“I melt every time; over and over again,” she said.