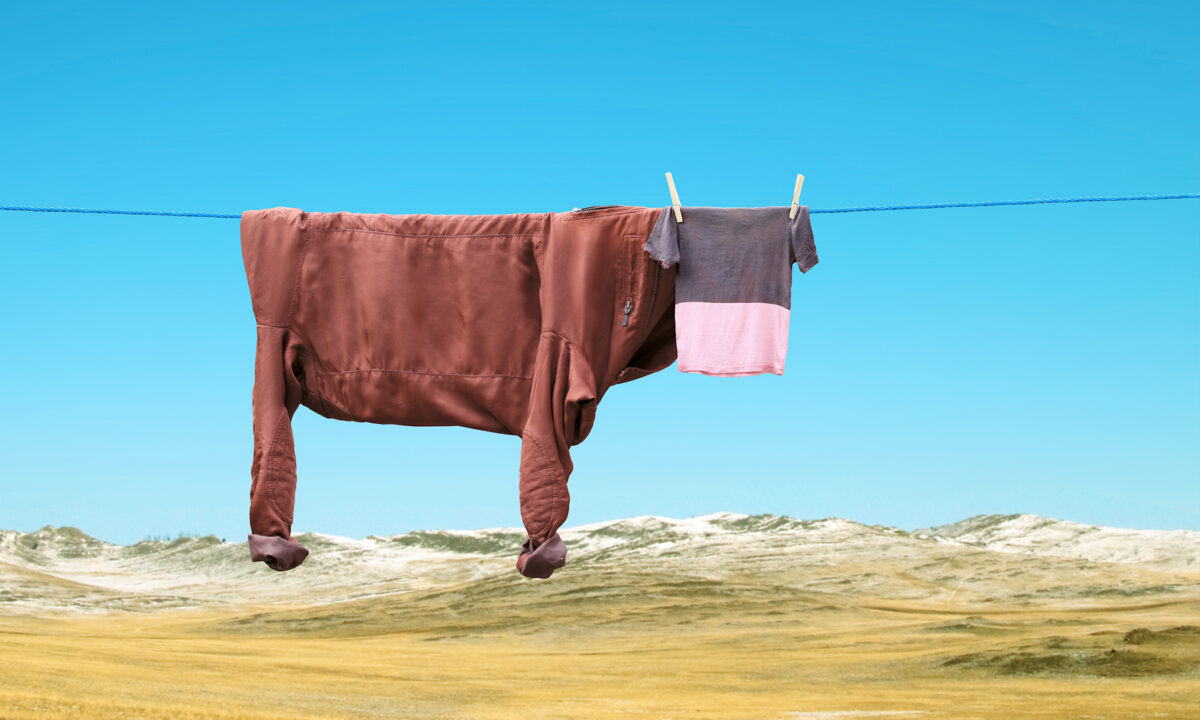 Bringing whimsy to the mundane, a Russian-born, London-based artist is making art from household items such as laundry, furniture, and food. Her unique movement, donned “household surrealism,” has garnered an international fanbase.

Helga Stentzel, 38, is hugely inspired by everyday life. She was running a company designing and selling children’s clothes and accessories, and in order to promote that, she started an Instagram page. But then she realized her customers wanted more.

“People got bored of seeing just gloves and T-shirts,” she told The Epoch Times. “I thought, ‘Okay, I need to show something to keep them entertained,’ and this is when I started experimenting with my first household things.

“I created an alien from a plate of peas, I did something with children’s train tracks. And that started gathering so much attention that people started reposting my images and creating their own, and I thought, ‘Wow, that’s interesting, I’m really onto something big here!'”

To Stentzel’s mind, a crack in the wall may resemble a pigeon or a pig; a cork may look like a cow.

“I think if we pay attention, if we are present in the moment, we can draw inspiration from everywhere, simply because there is so much wonder in the world already,” she said.

Stentzel had been making her art for some time before coining the term “household surrealism.” One of her first lines to gain major media attention was a series of animals constructed out of laundry on a clothing line.

Stentzel documented the process of making her first animal, a horse, during the early months of the pandemic.

“The first thing I saw was a sock which sat next to some pegs on the floor,” she recalled. “I thought, ‘Wow, this sock really looks like a horse’s head.’ I started experimenting with it, and realized that I could create the whole horse, so I took my husband’s jumper hanging on the clothing line and created a body.

“It turned out that the sock was too small, so I swapped the sock with my son’s trousers, and this is how I created the horse’s silhouette. This image became so popular that I thought I could just create more.”

Stentzel photographed the horse against a “nice landscape” she found in her archive of images, claiming it was “therapeutic” to envision the horse running free in a field while so many were cooped up in their own homes. “I think this was just my internal desire for breaking free from all the restrictions that COVID imposed on all of us around the world,” she recalled.

The same idea inspired other clothing line animals, including a cow against a backdrop of Russian mountains, and a bear that she assembled and photographed in Russia itself in February 2021, at minus 32 degrees Celsius.

“Everything is real; the snowflakes on the clothing line, everything,” she said.

Stentzel’s other creations include dogs and cats made from food—for which she won Food Creator of the Year 2020—and a mural painted on the side of a house in London adjacent to a building demolished during the Second World War, a piece of “accessible art” that she claims is her biggest accomplishment to date.

Stentzel, who says she’s been crafty since early childhood, always wanted to be an interior designer. She was encouraged by her parents to attend art school, later moving with them to Germany before relocating to London, England, to study Graphic Design and Advertising at Central Saint Martins College of Art and Design.

“I learned a lot about the basics: color combinations, composition, shapes and lines,” she recalled. “I believe that whatever we study or learn in our life eventually helps us on the next step of our career.”

Stentzel, who is currently working on her fifth animal in her clothing-line series, a badger, keeps a sketchbook by her side at all times to collect her observations. Beauty is everywhere, she insists, but finding that beauty can be a matter of perspective.

She explained, “You might see a heap of dirty laundry, or you might see an animal on the clothing line, it depends on how you choose to see the world. No one else can dictate to us what to see. My creativity is all about the freedom of this choice, the freedom to see positivity rather than the negative.”

Stentzel exhibits her work often and is always delighted to meet fans in person. Her favorite piece of advice to young artists is to always listen to yourself while creating, and that finding whimsy in the mundane is a skill that can be learned.

“I think, deep inside, we always know what touches us and what doesn’t, what brings joy to us, what feels real, and what sends shivers down our spine,” she said.

“[My followers] send me pictures of sockets, cracks in the floor, light switches, and little characters in those pictures … seeing those creatures and characters in everyday objects is definitely something everyone can learn. I assure you, if you start noticing, you won’t be able to stop seeing them.”

Stentzel showcases her unique art, and sells prints, on her website.