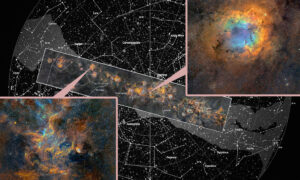 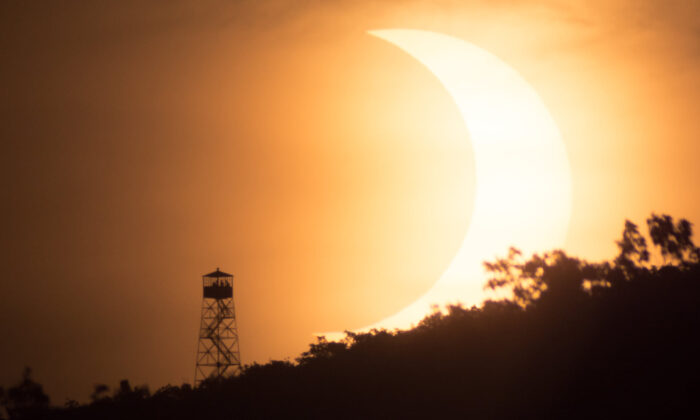 One night before an anticipated partial solar eclipse, a photographer from New York sketched out the picture he hoped to capture. He shared his sketch on social media.

The next day, his winning shot was a perfect replica of that very same plan.

Having found a vantage point overlooking the eclipse location and Stissing Mountain Fire Tower in Pine Plains, one of his favorite features, photographer Julian Diamond mapped out his expectations in minute detail, right down to the angles.

“Holding myself accountable,” he wrote, posting his sketch on Twitter on June 9. “If it’s clear tomorrow morning but my photo doesn’t look like this, feel free to ridicule me.”

“The eraser marks are there, I just like to be thorough with my erasing,” he joked of his “original schematic,” adding that many calculations had already taken place on scraps of paper.

The next day, he shared photos of his sketch beside the final shot in all its glory. Netizens loved the uncanny precision, sharing Diamond’s photos tens of thousands of times.

Diamond, who is based in Dutchess County, has been interested in astronomy and meteorology for a really long time. He shares his work on Instagram and on his website, and celestial photography is prevalent in his portfolio apart from landscape and nature photography.

“I’ve seen several partial solar eclipses in the past, and in August 2017 I was fortunate enough to experience totality for the first time. That occasion really brought eclipses to the forefront of my astrophotography studies,” Diamond told PetaPixel.

Diamond’s shot of the June 9 solar eclipse was part of a long-term project focused on marrying astronomical events with the historical forest fire lookout towers of New York State and the preparation began early in 2021. Diamond was determined to make it a part of his fire tower series.

After almost three trips to find the perfect location, he found the ideal line “the most tenuous gap in the trees” at a park. A known photographer, Diamond was also granted off-hour access by the local government to get his shot on the day, although with some ground rules in place.

On June 9, Diamond arrived early and was marveled when the sun made its appearance in a crescent shape above the horizon in the exact position he had calculated.

Peeking through his camera’s viewfinder, Diamond then saw a group of early birds hiking the steps of the fire tower, just over two miles away. Capturing them in his final photo added the human perspective he so dearly wanted.

While the June 9 event was a partial and not a total eclipse, Diamond maintains that “many dramatic, inventive photos” were captured by photographers across North America.

“While it’s true that totality is an experience without parallel, partial eclipses still inspire awe,” he claimed; his photos from the partial eclipse have proven “vastly more popular” than his shots from the total solar eclipse of 2017.

“My words of wisdom for the next one, then, are to not let the next one pass you by,” he implored.