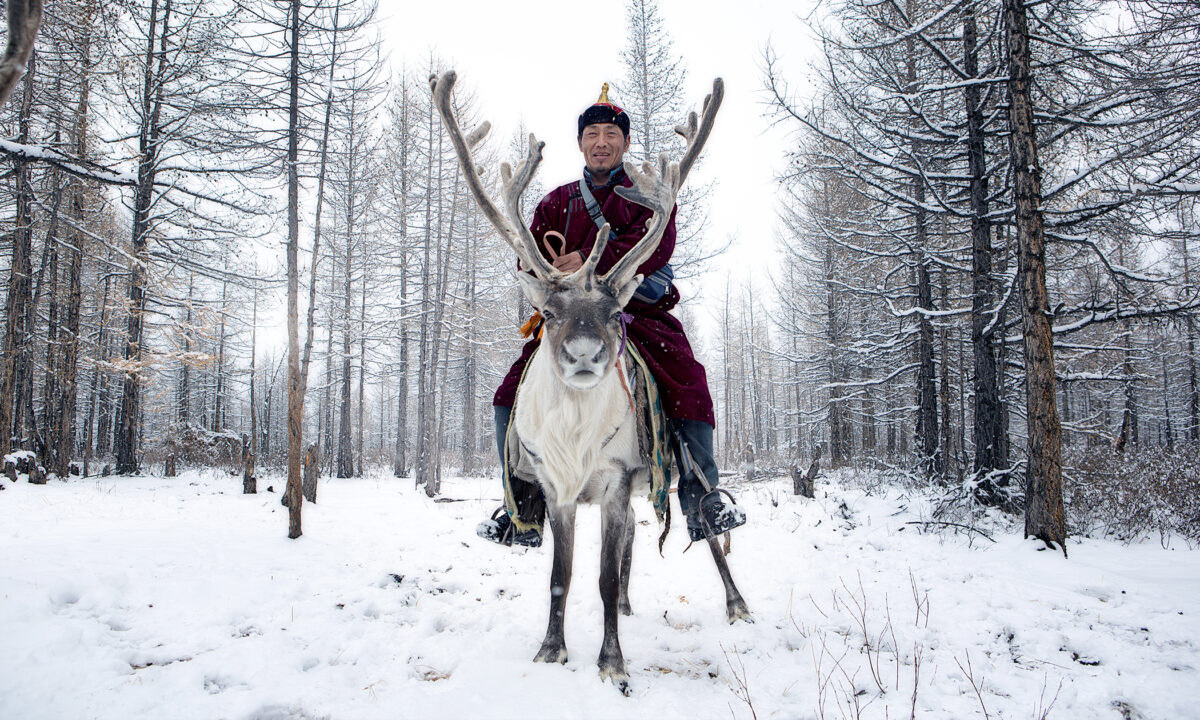 Inspired by the perseverance of the Dukha people—a community of reindeer-herding families living in harsh conditions on the Mongolian-Siberian border—two Spanish photographers traveled to this far, inhospitable land to meet and photograph the families and share their way of life with the world.

Both natives of León, Spain, 52-year-old Sandra Ballesteros, a nurse by trade, and 55-year-old Miguel Celis Puente, a bank clerk, set off to meet the Dukha in September of 2019.

“There are only about 40 reindeer-herding families left, divided into two groups, one west of Tsagaan Nuur and the other further north on the Russian border,” Sandra told The Epoch Times. “To reach the Dukha people is not an easy task.”

The pair’s journey to Tsagaan Nuur from Ulaanbaatar, the capital of Mongolia, was hosted by expedition specialists, Wind of Mongolia. The travel included three days by car using roads and dirt tracks. From there, they continued on foot and horseback to cross the Darkhad Depression.

“The Dukha are semi-nomadic and can be, depending on the time of year, more or less deep in the vastness of the Taiga, so few people venture to this remote place,” said Sandra.

However, for Sandra and Miguel, their photography involves close contact with their subjects. According to them, it is fundamental “to achieve that complicity that allows us to break down barriers and let emotions come to the surface.”

Led by guide Bat and a team of horsemen, they reached the Dukha settlement safely. Over the next five days, their guide helped them establish contact with a Dukha host family as the first snow fell around them.

Explaining more about their culture, Sandra shared that a Dukha community comprises two to seven nomadic families named olal-lal, meaning “they” in the Tuvan language. They move from camp to camp in search of pasture for their reindeer, who feed on a type of lichen that only grows in very cold places, which is the reason they are forced to move several times in the year.

The reindeer are fundamental to the existence of their herders, as they get milk, fur, and antlers from them; however, they don’t eat their meat. The Dukha instead hunt wild boar, deer, and elk for meat, supplemented by salted tea from reindeer milk, yogurt, cheese, and corn cakes.

In winter, the temperature drops to minus 40 degrees. To protect themselves from the cold, the Dukha wear traditional “deel,” tunic-like coats that reach below the knees and button to one side, which is then fastened by a belt.

For their footwear, the Dukha use reindeer skin or the fur from the animals they hunt such as wild boar, deer, and some elk. Nowadays, however, many have taken to buying rubber boots alongside flour, salt, and sugar from the nearby cities of Tsagaan Nuur or Moron.

The Dukha people inhabit conical teepees built from sticks and skins—nowadays, most are covered with tarpaulins—with wood-burning stoves inside. Some are timber-floored for insulation, but many are not.

“The temperature inside is pleasant while the heat of the wood lasts, which is consumed very quickly, then the cold penetrates like a knife,” said Sandra, adding, “The batteries of the cameras are discharged at subzero temperatures, so sometimes we had to keep them warm between our clothes.

“But the experience of living with those people in the middle of the forest was worth it, despite the cold and the difficulties of getting there.”

Sandra recalled “with special affection” the last night they spent with one Dukha host named Dabaaab, and his wife, Gantuya.

“We brought some sausage and wine from our land, and we shared it with them while we sang around the wood stove,” she said. “It was a very endearing moment.”

During their stay, Sandra and Miguel also learned that Dukha children learn to care for their reindeer from a very young age. Girls and younger women milk reindeer and prepare yogurt, cheese, and tea, while men, young women, and elders will help with herding.

Some Dukha men remain with their reindeer throughout the winter, enduring bitter outdoor temperatures to protect their herds from wolves and other predators.

Yet, the current conservation laws of the Mongolian government to preserve the Taiga threaten the survival of Dukha communities by prohibiting them from hunting some animals, felling wood for fire, and grazing freely. Both reindeer and Dukha populations are falling in number.

The determination of the Dukha to maintain their traditions, and their ability to survive in such hostile environs, compelled Sandra and Miguel to share their story as a moving photo series and open a debate: “What should prevail,” Sandra posed, “the protection of the forest, or people who, for years, have considered that same forest their home and depend on it and its resources to survive?”

Sandra and Miguel bought their first camera together over 25 years ago, and have traveled for decades in their “incessant search” for new ways to understand customs, culture, and lives different from their own. They specialize in portraiture.

“Our photography has evolved with us, as it is part of ourselves,” said Sandra. “Over time, we have improved our technical means, but that passion for understanding and capturing other cultural realities remains intact.”