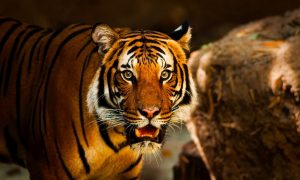 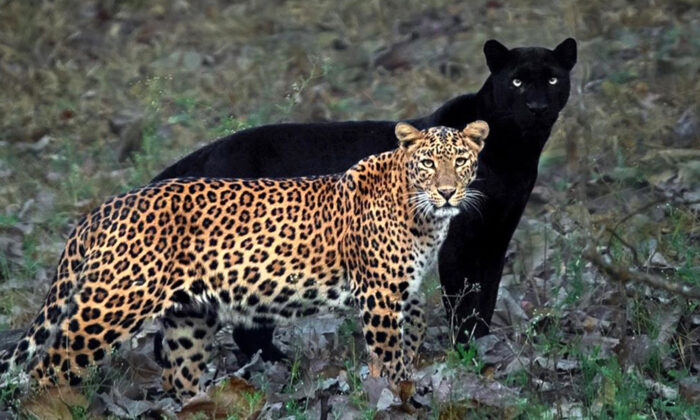 Combining immense creative skill, patience, and a stroke of luck, a photographer in southwestern India has captured a breathtaking feline phenomenon. A spotted leopard is “shadowed” by her black panther companion in a moment of incredible contrast and color.

The shot, for 32-year-old wildlife photographer Mithun H., was a “once-in-a-lifetime” win.

Mithun, from Bangalore, captured the remarkable, rare moment between the leopard and black panther as the pair stood side by side in a forest clearing. Both leopard and shadowy counterpart, as if one, meet the photographer’s gaze head-on.

The photographer, armed with his camera on what he called a “surreal morning,” snapped the picture on day six of a winter trip to Nagarhole National Park’s Kabini Forest in Karnataka. He uploaded the striking image to his Instagram page on July 19, titled “The Eternal Couple,” and the photograph quickly went viral.

Big cats Saaya and Cleopatra, Mithun explained, have been courting for four years. Cleo, as the photographer affectionately calls the stunning female leopard, is the dominant personality.

“I can still close my eyes and relive that moment every single day of my life,” Mithun told The Epoch Times. “You don’t see that often. Probably a once in a lifetime opportunity.”

Patience, he explained, was the key. Mithun waited six days in the same spot before being rewarded with everything he had hoped for and more.

“I could hear the panther and Cleopatra mating about 100 meters away in the thick undergrowth but could not see them, due to limited visibility,” Mithun described. “They had made a large kill and would not move until it was over.”

Years of acquired knowledge of how to track wild cats from a safe, respectful distance came into play in capturing the perfect shot. Mithun waited by one of Saaya’s favorite paths, and eventually, Saaya appeared. “He did after six days,” said Mithun; “I could wait for six years for a moment like this.”

Mithun first picked up a camera in 2009 and quickly discovered that his new hobby had the potential to become his life’s work. Photography, he says, is a “means to immortalize the moments I see in the wild,” and it helps him cement his reverence for the incredible bounty of the Indian jungle.

There are dangers associated with wildlife photography, Mithun conceded, but studying animal behavior and knowing one’s limits are the very best safeguard against accidents and injuries.

“These beautiful creatures are generally more scared and shy than we think,” Mithun explained. “Give them space and let them get comfortable with you, and you realize how close and personal you can get with their world.

“The secret is patience and respect.”

Mithun, whose primary passion is big cats, has even worked with National Geographic on a documentary titled “The Real Black Panther,” featuring Saaya. The welfare and longevity of wild cats such as this majestic panther and his leopard companion remain at the forefront of Mithun’s mission as a wildlife photographer.

“There is a lot to learn from these beautiful creatures,” Mithun shared. “They live by the day. All they are bothered about is their next meal, the immediate safety of their loved ones … We as humans need to appreciate the beautiful life and celebrate it every day, just like these amazing animals.”

As for what happens next for the talented photographer, Mithun has his eye on the rare and elusive Siberian tiger. “I’m forever in the quest of finding something new and unique,” he said.