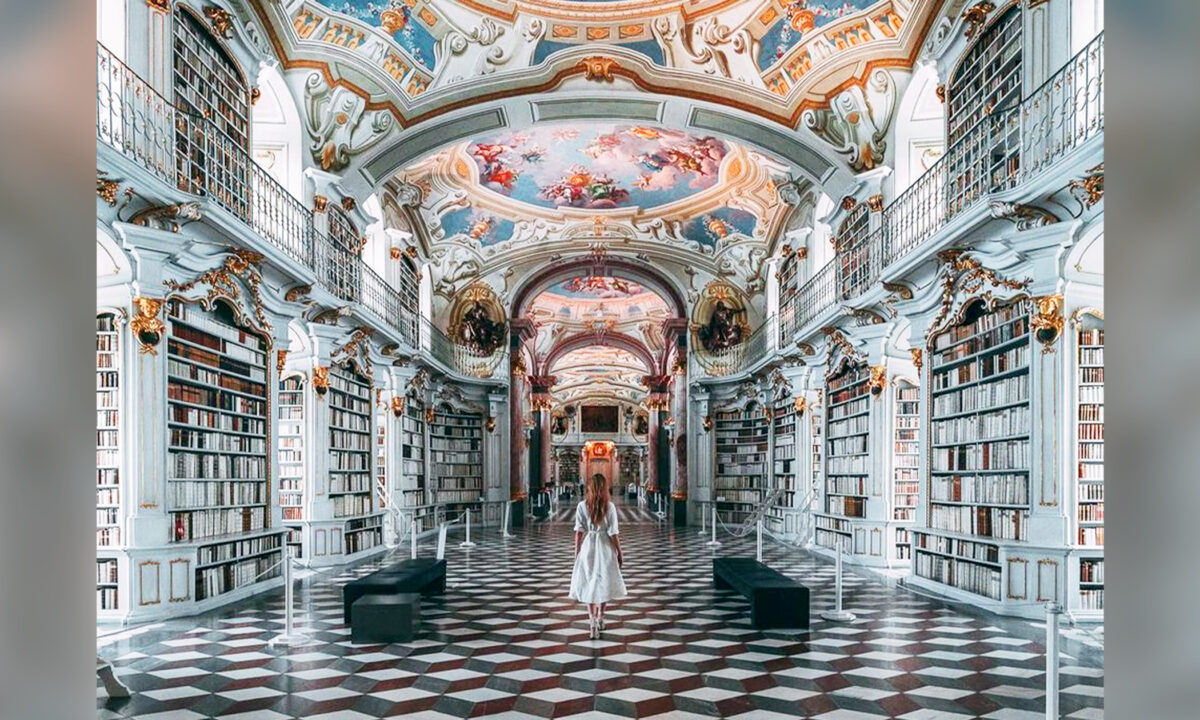 Photographer Showcases World’s Largest Abbey Library, ‘One of the Most Magical Places’

A photographer who found himself suited and booted with nowhere to go after attending a wedding took a magical detour to the world’s largest abbey library, in Austria. He walked away with a priceless series of photos and film, claiming, “It’s literally like stepping into a fairytale.”

Originally from Tel Aviv, photographer and restaurateur Nuriel Molcho made his home in Vienna. A passionate photographer, he saw his chance to capture the beauty of the library at Admont Abbey, a Benedictine monastery on the Enns River in Admont, Austria, on an unexpected visit one day.

“We were at a wedding in the area,” Molcho told The Epoch Times. “We were thinking of something to do, and were recommended to go to Admont Abbey. I didn’t really know what to expect when arriving there.

“It was completely empty, so we had the whole place to ourselves. You feel like [you’re] in ‘Beauty and the Beast.’ It’s absolutely magical, the attention to detail.”

Molcho shared video footage of his entrance into the library on Instagram.

Described by the library itself as a “repository of the knowledge gleaned down the centuries,” Admont Abbey library’s three chambers comprise some 70,000 books in the surrounds of late-European baroque architecture, frescoes, limewood carvings, and sculptures.

Commissioned by Abbot Matthäus Offner, the library was built and finished by the Austrian master builder Josef Hueber in 1776. In the spirit of the Enlightenment, Hueber maintained, “Like our understanding, spaces too should be filled with light.”

If you’re lucky enough to be there on a sunny day, Molcho told The Epoch Times, the light does indeed reflect beautifully off the books.

The couple also enjoyed a tour of the abbey library. Molcho was enchanted by the wall paintings, and he and his wife were shown the chambers’ “secret cabinets” that lead to stairs ascending to the second floor.

“I would say you can spend about half an hour inside to really see everything. It’s definitely worth the trip,” he said. “Maybe take fun outfits to really feel like you’re in a fairytale when entering! That’s why my wife was dressed perfectly in her beautiful white dress.”

Molcho—who owns restaurants across Europe, and is a hat maker with his wife—offered a tip to other photographers visiting the Admont Abbey library in the future.

“For five euros extra, you can actually purchase a photography pass which allows you to take photos and videos,” he said. “If you’re going, definitely take a wide-angle lens or use the wide-angle motors on your phone, because you’re going to want to capture the entire room.”

He added, “When it comes to the videos, the best video is walking in and opening that door, and just seeing the beautiful abbey for the first time.”