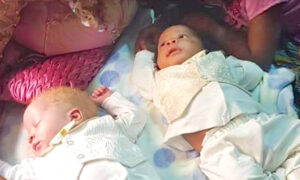 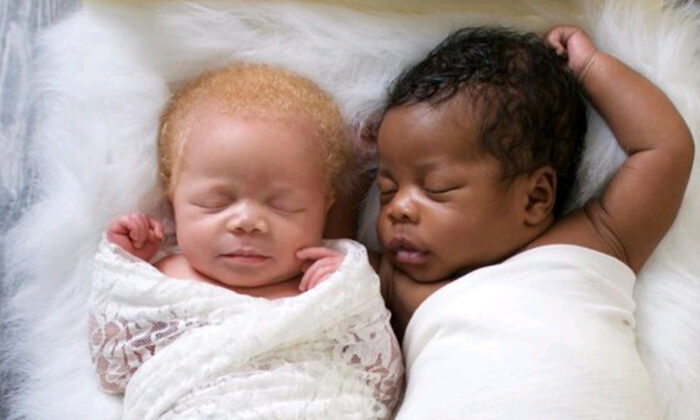 Photographer Gives Birth to Twins, One Black, the Other White, Takes Stunning Photos of Albino Daughter

Nigerian-Canadian photographer Judith Nwokocha is no stranger to baby photos. When it came time for pictures of her own twins, Kamis and Kachi, the results were inspiring. Her son Kamis has the same dark skin, hair, and eye color as his mother, whereas his twin sister Kachi is an albino.

“The first time I saw her, I wondered if the nurse was handing me my baby, or someone else’s,” Nwokocha wrote to Love What Matters. “I waited a few seconds for someone to tell me there was a mix up.” For all her mother could see, Kachi looked as though she had been born to fair-skinned parents.

“‘Perhaps she’s just very fair in complexion,’ I thought,” the mother recounted. “Albinism never crossed my mind as we had none in my family as far as I could remember.” Her faith allowed her to see that the difference was only skin deep. Since then, Nwokocha has embarked on a photography project to show Kachi how beautiful she is “so she would see the pictures and believe in herself,” as the mother told Inside Edition.

Nwokocha and her husband initially had trouble conceiving, and it took eight years before she became pregnant. “To our greatest joy, our second IVF attempt was successful and I knew my twins were finally growing in me,” she wrote. While the couple were overjoyed that they were finally having children, from very early on, it became clear that Kachi was having trouble.

“Throughout my pregnancy I was anxious but prayed and kept my faith. I constantly spoke to my twins and prayed for them as often as I could,” Nwokocha said.

Despite growing and developing at half the rate of her brother, Kachi made it to 37 weeks before a cesarean section was necessary. Both babies were delivered safely. That was when the shock of her skin color and her type-2 albinism diagnosis resulting from a deficiency of melanin became apparent.

“I was worried about if people are going to accept her, if … she was going to be a victim of bullying,” Nwokocha explained. Though she now lives in Canada, people with albinism are often subject to social discrimination in her native country of Nigeria. Lamentingly, she wrote, “I envied other black babies and thought, ‘Why me? Why was I the one to have an albino baby?’ How did I get black and white twins?”

Over time, Nwokocha and her husband, with the help of counseling, came to grips with the fact that their daughter was different, but she was theirs. “Gradually I began to see my daughter differently. I began to see the beauty in her condition,” she wrote. “I began to admire her gold hair, her brown eyes, her pink lips and everything about her.”

It was at this point that she began taking pictures of her twins and herself, showing that family doesn’t necessarily mean looking the same, but rather sharing the same love. “I’m showcasing the beauty in albinism by constantly taking pictures of her and twin brother,” Nwokocha explained. “I’m not sure she’s aware of her uniqueness at the moment, but eventually she’ll know, and it’s my responsibility to educate her and teach her to love herself no matter what.”

When Nwokocha takes the twins out into public these days, the reactions can both be positive and negative. “People get really confused with her and ask me about her appearance. ‘Oh, are you the mom? How come that happened?’” she said, though she admits people are even more surprised when they learn that Kachi is her brother’s twin sister.

Regardless of what anyone else thinks, Nwokocha is proud of both her twins and looks forward to her daughter’s future. “She’s so smart and has a strong personality,” her mom wrote. “She knows what she wants and will always go for it.”