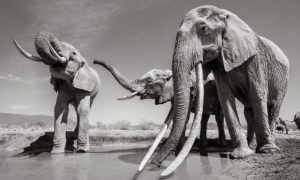 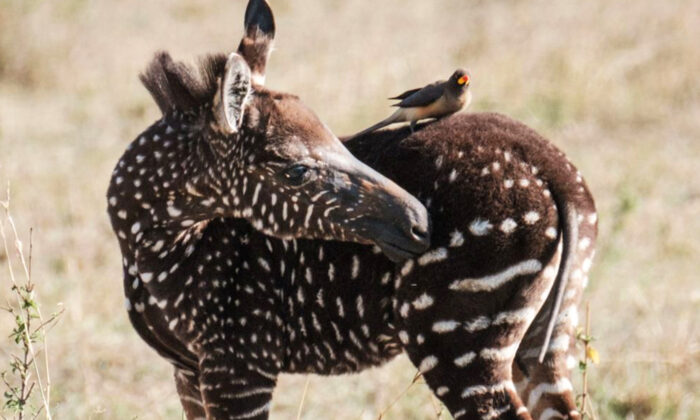 While on a trip to Africa, a photographer captured a set of stunning images of a rare “polka-dotted” zebra faun. The zebra was the first with its unusual coloration to be seen in the Masai Mara National Reserve in Kenya. Its unusual markings may be a sign of a genetic mutation.

Masai guide Antony Tira first spotted the animal on Sept. 13, 2019. “At first, I thought it was a zebra that had been captured and painted or marked for purposes of migration. I was confused when I first saw it,” he recalled, per Kenyan newspaper Daily Nation. He named the faun Tira before inviting photographer Frank Liu, who was in the area on the lookout for rhinos, to take some photos of its unusual color pattern.

Liu told National Geographic he believed this white-spotted animal was the first of its kind to be seen in Masai Mara. “At first glance, he looked like a different species altogether,” Liu said. However, similar fauns have been seen in Botswana’s Okavango Delta.

According to biologist Ren Larison, Tira has a rare genetic condition called pseudomelanism. While beautiful to look at, zebras without typical stripes face more dangers and challenges as they enter adulthood. “Research on other species has shown that, while it is harder for a predator to target an individual in a group, it is easier if an individual is different,” Larison explained, per National Geographic.

As for Tira’s chances of reaching adulthood, Larison believes them to be quite slim. “I have seen several photos of foals with this specific pattern over the years, but only one photo—from the ’50s—in which the individual was either a juvenile or adult,” she added.

Another potential issue to consider, said Larison, is that zebra stripes may act as a deterrent for biting flies, thus making this particular faun more vulnerable to diseases.

However, if the baby zebra does reach maturity, he would likely have no issues adjusting in his herd or mating.

After Liu first published his photos on his Instagram account, it attracted a “stampede” of tourists, the Daily Nation reported. According to the Kenyan media, the dotted baby zebra became top news in the area for three whole days. One bus driver even referred to it as “an additional wonder.”

On Jan. 15, 2020, Liu posted an update in the comments section on his Instagram and said that as far as he was aware, Tira was still alive and well. “If he happens to be in Kenya when I visit again this September I’ll be sure to share it!” he added.

Photos of the faun on Lieu’s Instagram page went viral with over 15,000 likes, while a video of Tira got an impressive 31,000 likes at the time of writing. Several users took to the comments section to express their awe at the unusual-looking animal.

While another remarked, “Fascinating! I have never seen anything like this!”

One particularly poignant comment said, “Incredible! You must feel so blessed to have captured these shots.”