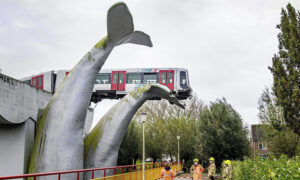 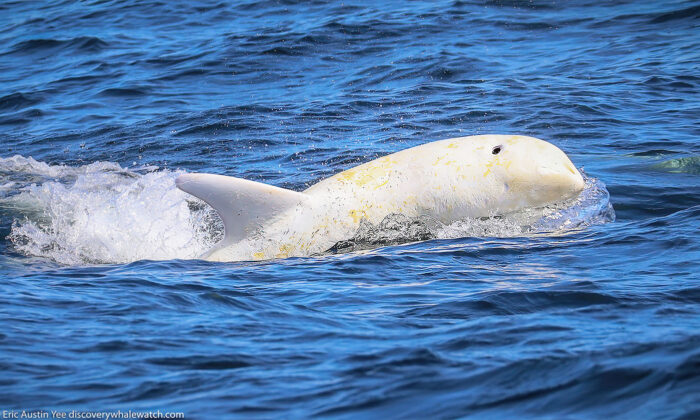 A rare white dolphin, dubbed Casper, has been delighting whale watchers in Monterey Bay, California. The striking swimmer has been known to the bay for over six years and is a firm favorite among marine mammal enthusiasts.

“There are not a lot of areas where dolphins can be spotted close to shore. It’s like the grand canyon off the bay,” Nancy Black, owner of Monterey Bay Whale Watch, told SFGate. “We’re always excited to point out Casper to everybody.”

Eric Austin Yee, a naturalist with Discovery Whale Watch, confirmed that Casper, a Risso’s dolphin, has been showing up for about six seasons, often with a pod comprising hundreds of dolphins. “It has been exclusively here in Monterey Bay,” said Yee, who saw Casper himself on March 3 and managed to snap several photos.

Yee shared images of the encounter in a Facebook post, captioned, “Our 10AM trip had some amazing encounters today! We saw about a dozen Northbound gray whales, a humpback whale, Pacific white-sided dolphins, and Risso’s dolphins. Casper the albino Risso’s dolphin also made an appearance!”

The white marine mammal was first photo-identified as a calf by local naturalists and biologists in 2014, swimming alongside an older female, presumed to be his mother, reports USA Today. Black first spotted Casper the following year.

“It’s rare to see a white dolphin, but not completely out of the ordinary,” she said.

Casper’s pale complexion, the result of a lack of melanin pigment in the skin, can be caused by albinism, a congenital condition which also causes red eyes; or leucism, a “genetic peculiarity” passed down as a mostly recessive gene, according to the Dolphin Project.

Yee is uncertain whether Casper is an albino or leucistic, while Black claims it is the latter, as Casper’s eyes are not red, though there remains some uncertainty.

“With leucism, you’ll usually see more natural pigment on them, whereas with albinism it’s a pure white animal,” Yee told SFGate. “There are a few other dolphins in the world that are white with patches of pigment on them so we know for sure they’re leucistic, but on Casper we haven’t seen the patches.”

A lack of melanin can place white dolphins at risk of skin issues owing to sun exposure. Adds Yee, “Also, being bright white in the ocean makes you highly visible, kind of being like a giant ‘EAT ME’ sign, you are highly visible to predators.”

Risso’s dolphins typically prefer offshore waters where they can reach their prey of choice—squid—at depths of 1,000 feet (approx. 300 meters). Yet, Monterey Bay has one of the deepest underwater canyons off the West Coast into which dolphin pods swarm to feast on spawning squid.

“Sometimes we’ll see Casper for a couple weeks in a large group with a thousand or more dolphins, or in subgroups within the same school,” Black described. “Nobody else has spotted Casper outside Monterey Bay.”