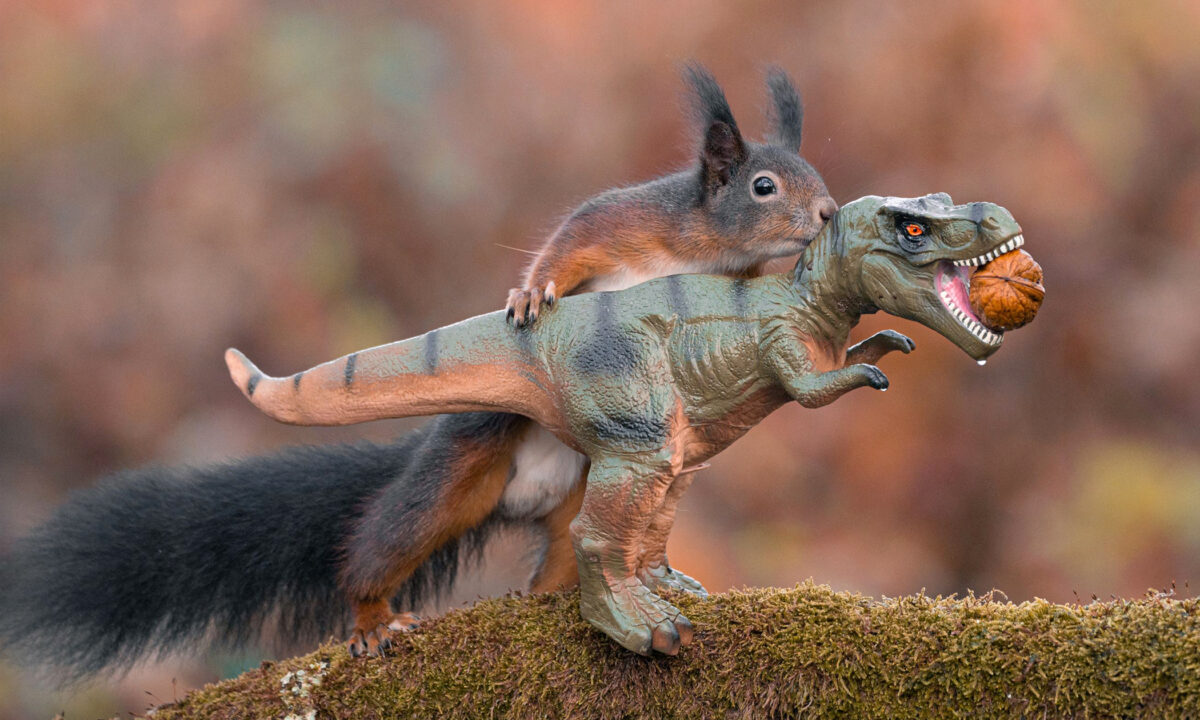 Rwanda-born self-taught photographer Niki Colemont, 36, has spent 3,200 hours across six years photographing and observing red squirrels. The key ingredients to capture them according to him are time, patience, and perseverance.

For Colemont, it all began with his first encounter in 2016.

“When I saw my first squirrel in the garden of my girlfriend’s grandmother, I bought a squirrel feeder to get them on the same tree each day,” he told The Epoch Times. “I went to a local animal store and bought peeled walnuts to place in the feeder. I placed a wildcam with motion detection, and waited for two months; then the magic happened.”

After noticing on the wildcam how the first squirrel learned to open the feeder, five days later, he saw two new squirrels catch on. Excited by this, he then bought himself a wildlife tent for the purpose of observation and a telelens for his Nikon D5200 camera as a 30th birthday gift, which he shares opened up a “new world full of opportunities.”

Colemont then built a natural setup for the squirrels and placed food in strategic places, hoping to entice them into special poses without the use of Photoshop.

“My brain was on fire and I started to get ideas,” he said. He began to think of things that no one else had thought of before.

On Oct. 10, 2021, in a private forest near his home in the Belgian village of Diepenbeek, Colemont snapped his superlative series to date.

He placed walnuts inside a toy dinosaur’s mouth, then waited patiently at a distance of three meters for the squirrels to grab the nuts. It took three days for them to summon the courage, but from that moment on, there was no holding back. Seven squirrels joined the party.

“I put the dino on a branch and had to stabilize his paws, because red squirrels can be very dominant and rough … the squirrels just did everything that I had in mind. The hardest part was waiting for the moment to happen,” Colemont said.

Sharing more about his experience photographing these squirrels in action, Colemont said: “They grabbed the nuts and buried them in the ground away from me. I could place a new one, and they kept coming back … I could do this all day long.”

He also tried to scratch with a peeled walnut on the teeth of the dino so that the squirrels could bite its mouth. This all resulted in really “funny pictures.”

Colemont shared that he found the toy dino that stars in his photo series “by coincidence” while browsing a toy store, noticing it was the perfect size to use with red squirrels.

The talented photographer considers squirrels “the perfect models,” for their cuteness, curiosity, persistence, intelligence, and ability to do many things that humans can do. Through his photos, he hopes to convince others of what can be achieved without photo editing, and bring joy to viewers of his photographs, “even if for two seconds.”

His gear for this shoot was a Nikon Z6II camera and sigma 150-600mm lens. For post-processing, Colemont shares he usually opts for Lightroom.

Colemont was adopted by a Belgian couple as a boy, escaping war-torn Rwanda before the genocide of 1990. As a child, his love for dinosaurs was encouraged. He had inflatable dinosaurs to ride on and an encyclopedia to feed his knowledge.

Now as an adult, he works in the automotive industry making soundproof dashboard isolations for cars.

Needless to say, Colemont’s spectacular-themed photo series of the dinosaurs and squirrels has received great feedback from the public.

“For example, a parent commented that her son enjoyed the dino shots; for me this is wonderful, because I think my work is wonderful for children, and sometimes I’m a little child myself,” he said.

Colemont, who shares his work on Instagram and sells prints online, hopes to inspire others to go outside more and enjoy nature, with or without a camera.

To any budding photographers, he advised: “You can start experimenting in your own garden. Every tiny object in your own house can be an interesting subject to start with; just bring your imagination to life.”