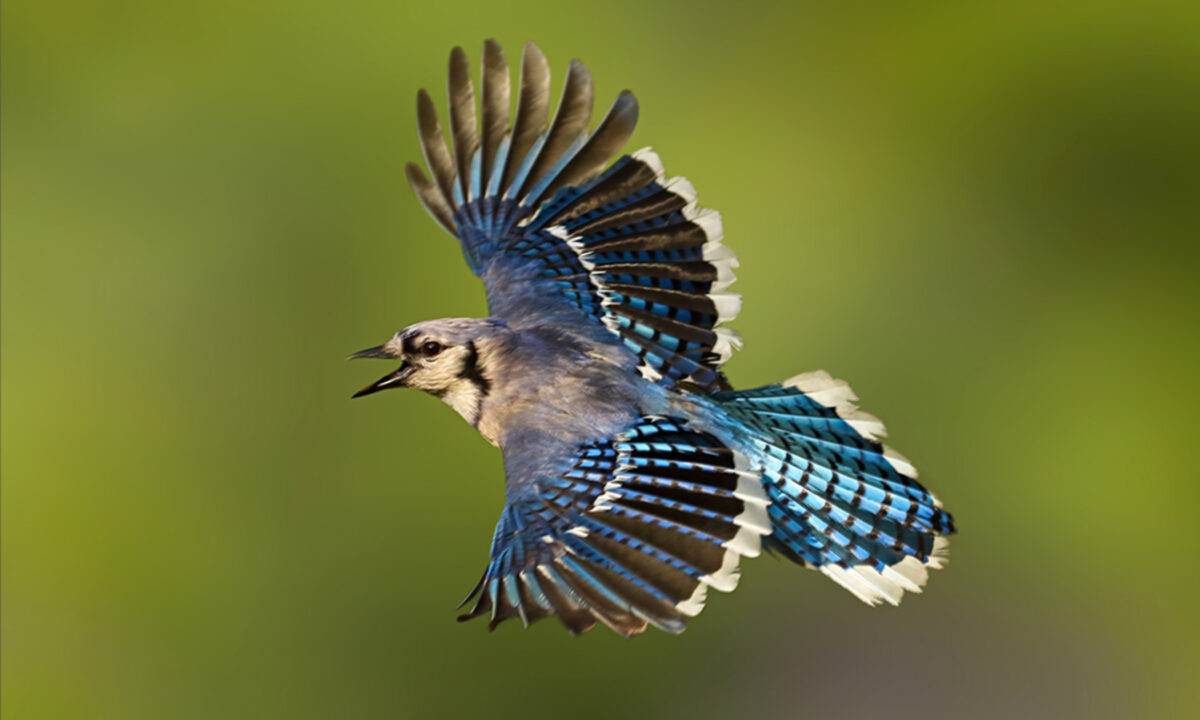 A photographer and bird lover who’s befriended blue jays in her backyard has captured an incredible series of close-ups, showing the little birds in all their colorful glory, and proving that the wonders of nature are never far away.

Jessica Kirste, 43, of Linden, New Jersey, has taken photos of blue jays for years. However, finding herself more at home in the spring of 2021, she became more interested in this particular subject.

“It started in my upstairs window,” Jessica told The Epoch Times. “I would sit on my ottoman and throw unsalted shelled peanuts out the window, and watch them fly in for them while photographing mostly portraits when they would land on the wires. Then I decided I was going to make it a goal to get blue jays in flight.”

As her passion in photographing them grew, she began sitting out more with these beautiful birds. She spent months tracking their speed and flight patterns.

“Over that time, they have gotten really used to me and look for me in the evening at my upstairs window,” said Jessica. “I think I will eventually get to the point where they will take the peanut from my hand!”

Jessica fell in love with photography as a teen, when she started experimenting with her mother’s film camera. Her subjects mostly involved family and friends, with occasional trips to the zoo or aquarium.

However, she claims her efforts were “pretty bad” until a 2007 trip to the Baltimore Aquarium, where she noticed that her friend’s digital camera took better quality photos.

She saved up for her own digital camera that same year, a Canon S5 IS super-zoom point and shoot, and believes this is when her photography career began. She transitioned to a DSLR in 2010.

She then learned how to use a digital camera by photographing river birds at Rahway River near her home. Since then, she has made wildlife, bird, and zoo photography her area of focus.

In spring 2021, Jessica was visited by four blue jays that eventually became regular guests in her backyard. The same four birds returned in 2022 after a short migration over the winter, with more, totaling 10.

“I believe a few are last year’s offspring,” said Jessica.

An acorn tree in Jessica’s yard provides one of their favorite foods, but the original four jays have Jessica “well-trained” by sitting at her window until she raises the blinds in the morning and gives them peanuts.

She asserted, though, that they don’t completely rely on her for food. She has also seen them feed on bugs in the grass, acorns, a mulberry tree, and the invasive spotted lanternflies.

Each bird has a unique black headband that goes around from the back of the crown, down the side of the head, and around the front to the other side, said Jessica, making it possible to identify each individual bird.

She has nicknamed her favorite jay “Bat Bird,” as his stripe resembles the Batman symbol, and claims one of Bat Bird’s entourage is cheeky enough to fly past her head after collecting a peanut.

“Maybe this is his way of saying thank you for the peanuts,” she said.

The nature photographer prefers snapping blue jays two to three hours before sunset when the waning sun “naturally saturates their blue feathers in the golden light.”

Jessica explains that the blue hue of the jays’ feathers owes to melanin responding to light. “It’s a stunningly beautiful optical illusion that has to do with light scattering,” she said.

The little birds are, in fact, grayish-brown, which can be seen when photographing the birds from underneath.

She emphasizes that blue pigments are rare in nature, if at all they do happen to exist.

Sharing more about how she captures her stunning shots, Jessica said that she will line up her ideal shot against a natural backdrop, then throw peanuts to encourage the blue jays to fly in a certain direction that she wants them to.

The blue jays have grown used to her routine and “wait patiently” for peanuts—some of which they cleverly hide—in exchange for posing for Jessica’s spectacular shots.

One of her most amazing shots to date depicts a blue jay flying across a rainbow from a passing storm.

Blue jays are not the only visitors to Jessica’s yard, but they are her favorites. Among others are a male and female red-bellied woodpecker—”Mr. and Mrs. Red,” as she calls them—and they, too, make for amusing photo subjects when they are in a fight with the blue jays over peanuts.

Jessica shares her photos on Instagram, Facebook, and her website. She claims her popular photos have “inspired others to start offering their backyard visitors some peanut treats in exchange for posing for photos!”

The New Jersey-based photographer believes you don’t need to travel far for good photos. Blue jays are common visitors in the backyards of central North America, and she thus encourages others to make friends with the charming little birds.

“Always have some unsalted shelled and unshelled peanuts on hand,” she suggested. “Spend time outdoors instead of in front of screens; the more I sit outside, the more I see hawks, woodpeckers, warblers, egrets, and even bald eagles.

“You never know what you will see when you’re spending time outdoors.”