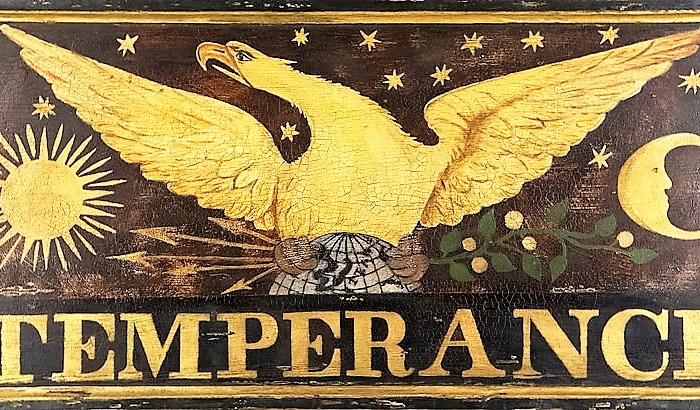 A painting by Peter Koenig titled "Temperance" in mixed media on pine. (courtesy of the artist)
Arts & Culture

Koenig is listed in the magazine’s August Directory of Traditional American Crafts in two categories, ornamental painting and painted framed art. “These artisans have been selected as the top in the field,”  the publication said in a statement.

Jeanmarie Andrews, features editor of the bi-monthly, said the honorees “showed mastery of the art form, heritage techniques, and workmanship.”

Judges convened by the magazine are curators from museums of Early Americana—Colonial Williamsburg, Early Southern Decorative Arts, the Winterthur, Old Sturbridge Village, and Shaker Village, as well as antique dealers, scholars, and teachers of the era.

Colorful wood signs advertised businesses throughout the American colonies during and after the Revolutionary War. Koenig does paintings based on American sign makers who worked from 1776 to the 1850s.

“Each piece is an art piece,” Koenig said. “Very rarely do I do business signs.”

Traditional craftsmanship has declined in the age of Photoshop and digital reality. Artisans like Koenig keep alive crafts that were part of early America, according to Tess Rosch, publisher of Early American Life.

“Many of these skills were passed down from master to apprentice for hundreds of years, but now, few new people choose to learn and master them,” she said.

Koenig was trained as an academic painter, a fine artist who painted figures and portraits. His former career was as a graphic artist. He had to learn how to paint in the primitive style of early American artists.

He grew up around art as both his parents were artists. “I’ve been drawing since I was four,” he said.  His father worked in publishing and Koenig says he never ran out of paper and drawing tools because his father would bring them home from work.

Koenig works for accuracy in his techniques and authentic images in his work, and says he follows the methods of the early sign makers.

The work should appear to be 150 to 250 years old, he said, “like it was rescued from the outdoors.”

He says he has perfected his techniques to age the piece over many years. He uses various materials to show cracking on the surface, as if the paint were wearing and peeling.

He adds as many as six layers of paint on a surface before he actually paints the subject.

He adds layers of plaster material over the sizing used on canvas. The sizing interacts with the plaster. “They fight each other and this creates this random cracking,” he said. He then uses chisels and files to weather it or “whatever works to really make it look old.”

He wants the piece to have its own history. “Somebody’s could have shot at it. It could have been in a battle before an attack … out in all kinds of weather.”

He wouldn’t call what he does shabby-chic, and in fact, he’s not a big fan of the now trendy look. “It’s a bit too symmetrical, too planned out,” he said. The appearance of aging should look very natural and random, he said.

The wood he uses is pine or poplar. He tries to work on wood planks. Most old signs were painted on two planks. Sometimes he finds some old planks from barns that are falling down that work well.

He likes wood that is pre-Civil War because “it’s dark and crunchy and wide,” Koenig said. “They don’t cut wood like that today.” Barn planks bring a premium price for his work.

His paints are traditional oxides in colors unique to the period. Some companies make milk paint, that use milk as a bonder. Koenig’s paints come from a British company that caters to this niche.

Koenig finishes his work off with hardware that might have been used to hang the signs in early times. It’s usually iron and shows wear. He uses a local blacksmith to fashion the hardware for his pieces. He also meanders through antique shops once in a while to find hardware.

Although most sign makers of the period were unknown itinerants, Koenig has studied the craftsmanship and style of William Rice of Hartford, CT who signed his name to signs.

One sign done by Rice depicts a lion in chains, a metaphor for the defeat of the British lion by the American colonies. Koenig says Rice and other sign makers used symbols like the chained lion to celebrate America’s victory over Britain.

Images on the signs were not always anatomically correct, but that is what gives them charm, he said. Although he is a skilled draughtsman of the human figure, Koenig learned how to paint images in a more primitive style.

“I had to pretend I was a guy who didn’t know anything about anatomy or proper proportions. I had to climb into their heads and try to figure out how to make this not look I’m trying to be naïve.”

As for the lettering, he paints letters by hand and imitates old font styles. The closest font today would be something like Times Roman and a script font, Koenig said. “It has that charm of a naïve, untrained artist.”

Koenig’s work sells between $200 and $4,500. The price depends not on the materials but on the “painterlyness” and skill in the work, he said.