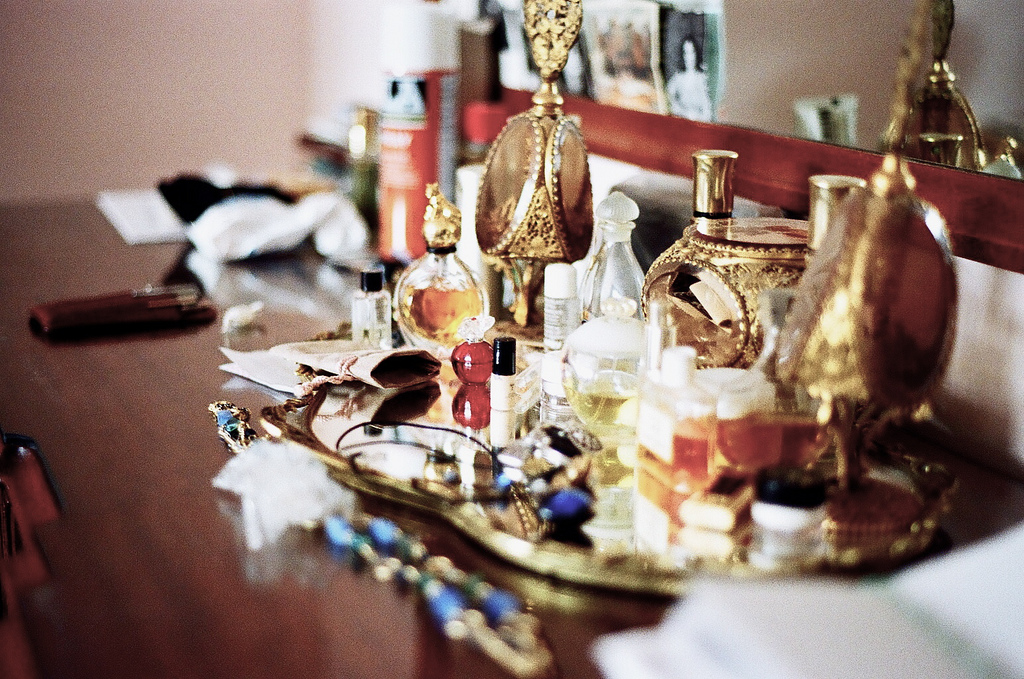 Those of a nervous disposition might be better off buying chocolates. (Jessie Jacobson, CC BY-SA)
People

Perfume Could Be the Riskiest Gift You’ll Ever Buy

Those who mark Valentine’s Day may well have been making careful plans to impress that significant other these past few days. Classy restaurant—check. Romantic atmosphere—check. Best suit or little black dress—check.

But perhaps you haven’t given quite as much attention to how you will smell. Or perhaps you’re planning to offer perfume as a Valentine gift. If so, read on. There is much you need to know in advance.

Applying perfume to the body probably emerged as a means of disguising the build-up of odor on clothing, which in times past was often worn for weeks or months at a time. Because ingredients were expensive, perfumes were associated with high social status.

There are numerous references to people using perfume in ancient scripts including the Old Testament and the writings of the Roman natural historian Pliny the Elder. The oldest known perfume factory, discovered 12 years ago near the Cypriot town of Pyrgos, dates back about 4000 years.

Nowadays, of course, perfumes are relatively cheap and accessible. Despite this and the advent of washing machines and ventilated kitchens, we continue to use them. The social stigma of bad body-odor persists, and the modern fragrance industry is worth billions of pounds worldwide.

But if we need perfumes to simply mask our bad odor, why are there so many different products available? And how do perfumes change or block the potentially relevant information contained within body odor?

Research is now challenging the conventional view that perfumes simply mask bad odor. In one study, researchers asked participants to wear cotton underarm pads, as described above, but they were instructed to apply a particular fragrance under one armpit while leaving the other fragrance-free. Unsurprisingly perhaps, volunteer sniffers later found the fragranced armpit odor to be more pleasant.

Bonding Through Scent on Valentine’s Day

But then the researchers asked a new set of participants to apply their fragrance of choice under one armpit and to apply another fragrance, chosen by the experimenters, under the other. This time, the sniffers judged the fragrance/body odor blends as more attractive when they involved the wearer’s own preferred fragrance—even though the sniffers found the two fragrances roughly comparable when there was no body odour involved. The conclusion? People select fragrances that complement their own body odor, producing a favorable blend.

How might we achieve this? This question brings us back to the MHC genes that we mentioned earlier. A key study determined the MHC group of different sniffers and then noted which odors they preferred among a range of common ingredients that might contribute to a perfume that they would wear.

The results revealed a correlation between certain MHC groups and preferences for certain ingredients, suggesting that we choose fragrances that enhance the MHC signals that we are already giving off. Yet these correlations disappeared when the same sniffers rated the ingredients for a perfume their partner might choose to wear. At the genetic level, perfume preferences only work when thinking about ourselves.

Another experiment took a slightly different approach to reach a similar conclusion. Researchers first extracted MHC peptides, a signature component of MHC molecules, from a number of volunteers. They then spiked samples of the volunteers’s body odor with peptides representative of either their own MHC or of other people’s MHC. When they were then asked to choose which spiked odor sample smelled like themselves, they tended to choose the one spiked with their own MHC peptides.

Back to the Perfume Counter

Taken together, these studies suggest that we evaluate perfumes, at least in part, according to whether they suit our individual, genetically influenced odor.

In an ideal world we might all know our partner’s MHC genotype and choose perfumes that suited them accordingly, perhaps following some helpful system of color coding or the like. Unfortunately this doesn’t look likely to happen in any major way any time soon—the test currently costs about $250 a head.

So what lessons can be learned from these studies this Valentine’s Day? One main point is that choosing a perfume for your partner based on your own preference is unlikely to work well. Your best bet is to ask perfume shop staff to select a perfume that smells roughly similar to the one you know your partner likes. Or do it yourself using perfume finders online, such as FR.eD or Nose.

For those choosing a fragrance for themselves, the lesson is to ensure you select one that really suits you. In the study of odor/fragrance blends, there were a few wearers who bucked the trend and smelled better with the experimenter-assigned perfume than with the brand they chose themselves.

So it’s always worth investing some time in making a choice, and to test-drive it on your skin first. If this sounds daunting, you can at least proceed in the knowledge that the person best placed to decide what perfume suits you best is looking back at you in the mirror.

This article was originally published on TheConversation.com.