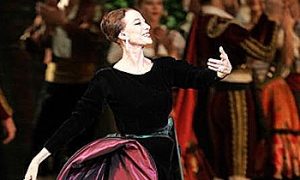 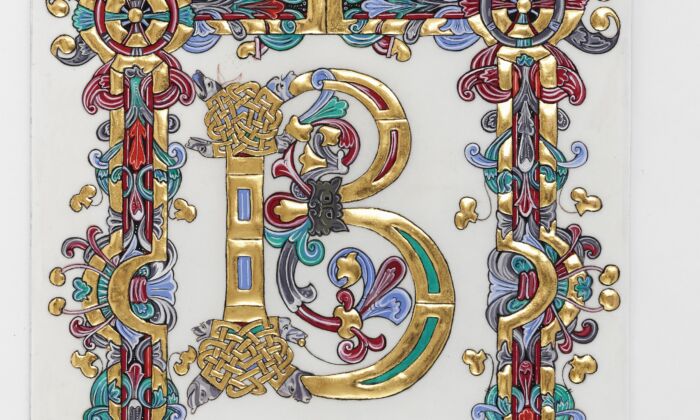 The letter "B" from ‘"Beatus," Latin for blessed, copied from the Eadui Psalter, 2018, by Patricia Lovett. Leaf gold on gesso base, gouache on vellum. (The British Library)
Craftsmanship

A medieval and modern scribe
By Lorraine Ferrier

Scribe Patricia Lovett writes calligraphy and paints illuminations at her home studio in Sevenoaks, Kent, England. But she originally learned the art of lettering out of frustration.

Lovett studied geography at the university she attended because she wanted to draw maps, then went on to work in business, and then taught in large inner London high schools, “often with quite difficult kids, and I loved it,” she said in a phone interview. All along, she drew lots of maps for publications but couldn’t do the lettering for the names, so out of sheer frustration, she decided to go off and learn how to letter.

The course wasn’t only calligraphy, but also illumination—she had no idea what that was—and heraldry, which she thought was rather outdated. “But from day one, I saw the color and gold and the painting and I just fell in love with the whole thing,” Lovett said.

“I feel it’s such a privilege to be able to do what I love doing all the time. I work seven days a week, but I don’t call it work,” she said.

Lovett’s craft has taken her all over the world, where she has taught and lectured at some of the world’s most prestigious institutions, such as Harvard. Her work has appeared on screen, in documentaries, and in movies. She’s written over a dozen books. In 2017, the British Library published her book “The Art and History of Calligraphy.” Most recently, she was filmed for a series of short videos on how to make medieval manuscripts as part of the Polonsky project, a joint online venture between the British Library in London and Bibliothèque nationale de France.

Lovett works tirelessly to uphold UK heritage and tradition. As well as being part of parliamentary working groups (similar to a congressional caucus), she’s currently the chair of the Heritage Crafts Association, which is a UK organization that promotes and supports UK heritage crafts.

In 2013, she was awarded one of the highest national honors: a Queen’s honor for services to heritage crafts and calligraphy.

Lovett’s love for her craft is infectious. Below, she teaches us about the life of a medieval and modern scribe in terms of manuscripts’ significance and about how they were and are made.

The Epoch Times: How has the role of the scribe changed over time?
Patricia Lovett: Obviously the prevalence of people being able to write did change during the centuries as the population became literate, but at one point scribes were crucial.

For example, the Emperor Charlemagne, according to his biographer the scholar Einhard, could read but not write, and so at his bedside, he had writing tablets on which he could practice his letters, which I think is just the most wonderful image. You’ve got the most powerful man in Europe at the time with his tongue between his lips outlining the letter “a.”

If you were a monarch, you would employ scribes, probably like monarchs and presidents today in that they wouldn’t be typing their own emails or letters, and any communication would be dictated to an assistant.

Nowadays, most of the writing is done whether digitally, through typewriters, or whatever, so the role of the scribe has changed. People use me only to do things of significance: if someone is getting married and the mother has written a poem, or if someone has a significant anniversary and there are some words for a speech someone is going to say that they’d like recorded, or a friend’s birthday and she’s always liked this poem.

What I’m working on at the moment, today, is a list of rectors for a church, and that list starts in 1262. They decided that they wanted a new list of rectors. They’ve been bequeathed a sum of money by one of their parishioners, and so they have come to me because they want it written out on vellum.

The Epoch Times: What is the actual definition of calligraphy?
Mrs. Lovett: “Calligraphy” is from the Greek “Kaligraphia.” “Calli” comes from “kallos” meaning beauty, and “graphein” is to write, as in “geography” or “topography.” And so it’s some sort of writing or record. A simple definition is beautiful handwriting.

The type of book we all recognize now is called a codex, simply a book made of sheets of paper, vellum, or papyrus, and is almost synonymous with the Christian religion, although we think there were pamphlets and things before. The Greek and Romans used scrolls more but had codices. They had a codex form in a wax tablet, but the turning-pages type of book that we’re familiar with very much developed in the Christian religion.

When books became very important, because this was the word of God being recorded, people wanted to show their devotion and put money into the production of books. They chose the most precious things to use to embellish them: precious metals like gold and silver, and the most precious pigments, such as ultramarine.

Gold, of course, for Christians also has other connotations. The fact that it is yellow, which is the color of the sun, and that the sun rises in the east, which is where European Christians would look to Jerusalem, which has great significance for them, was all bound up with the use of gold, more than with the use of silver. And, of course, silver tarnishes, and they knew this.

The books where gold was added were often very important in religious foundations or in the larger churches. These books would be held high and processed around the church either before or during the services, and either the sunlight or the candlelight reflecting off the gold would look as though the book itself was being lit from within. Because at that time there was no cognizance of the angle of incidence equals the angle of reflection, which are the laws of light that we know now, it would look as though the word of God in the book was being lit from within, and so that is the illumination part of it.

What tends to be the general assumption now is that illumination refers to the pictures and the gold. But technically, if there is something shiny that reflects the light, then it’s called an illumination.

Now those little miniatures in those books, those illuminations, were outlined in a red pigment coming from lead, which in medieval times was called minium. This was used to outline and put the image down onto the paper, because at that time there was no graphite. That came much later.

Although there’s evidence of leadpoint in the “Lindisfarne Gospels,” generally, securing the image (the outline), before you did anything else in the book was done with minium. Because these little pictures were outlined in minium, they were called miniatures. But not every picture in a book was small, so I would refer you to pictures in the Bury Bible where some of those pictures are a foot square. That’s not miniature in our sense of the term today. They were called miniatures regardless of size. But because most of them were small, the word “miniature” became the word that we now use for small or discreet in size.

The Epoch Times: What’s involved in making a medieval manuscript?
Mrs. Lovett: In terms of the pages of the book, they would have been of vellum or parchment. Vellum is calfskin. Parchment is a generic name, but most people take parchment as being sheepskin or goatskin. But neither of those animals produce skins that are as wonderful as calfskin.

There is now only one master vellum maker in the country; his name is Lee Mapley, at William Cowley Parchment Makers. He produces the best vellum I’ve used.

It’s important to note that the production of vellum and parchment is a result of a byproduct of the meat and dairy industry. More male animals are born than can be used for breeding, so they are reared to a certain size, and then they are killed for food. A lot of the skins go to the UK leather industry, but interestingly there are quite a few that go to landfill sites. Only a few skins go to make parchment and vellum.

Making the medieval manuscript starts with vellum and parchment, and then the pages would be cut to the appropriate size. A number of manuscripts are tiny, not much bigger than a postage stamp, so those would be used for private devotion. Some Bibles in the 12th century are huge—almost coffee table Bibles.

The page would be set out pretty much like how we do it now. I use a set of dividers, which are like compasses with two points (rather than a point and a lead) to mark the lines down the page. Now, I use a pencil, but then they would’ve used a leadpoint or a silverpoint to mark out the lines.

Quills are wonderful to write with. I do use quills but mainly for shorter texts because of the need to recut them every half page or so. Otherwise, I use metal nibs.

The ink came from oak galls, which is the growth that an oak tree makes when a gall wasp lays its egg on the new growth. These galls are crushed and mixed with water. Then iron salts and adhesive are added, and that provides a very good jet-black ink. But it is corrosive, and there are instances of books where the ink has eaten through the skin.

Some letters are written in red or blue ink. A lot of pigments that were used, particularly for the “Lindisfarne Gospels,” were local pigments, as they didn’t import much for that manuscript. But later, a number of pigments were imported, including ultramarine, one of the most precious pigments.

Ultramarine is from the semiprecious stone lapis lazuli, which at the time came from northwest Afghanistan, along the Silk Route. The vibrant orangey-red in manuscripts is vermilion, which in medieval times was called cinnabar and came from mercury sulfide. Then there was a gold pigment called orpiment, which is an orange-yellow arsenic sulfide mineral. So it was not sensible to lick your brushes!

The Epoch Times: Presumably, you don’t use those pigments anymore.
Mrs. Lovett: I have them, and I demonstrate with them. I mean, we were very cavalier in the past, but there are so many health and safety issues—and I think rightly so—that I don’t teach painting with pigments anymore.

I must admit, many years ago, I was talking at an international conference of academics interested in Anglo-Saxon manuscripts, and I took the lid off a pot of orpiment. I was just sort of holding it to see if I could catch the light to reflect on the crystals to demonstrate that it did have a bit of a glitter, and I thought, “Goodness, if one of these academics sneezed, I could wipe out the whole [of our] knowledge of the Anglo-Saxons.”

To find out more about Patricia Lovett’s work, visit PatriciaLovett.com