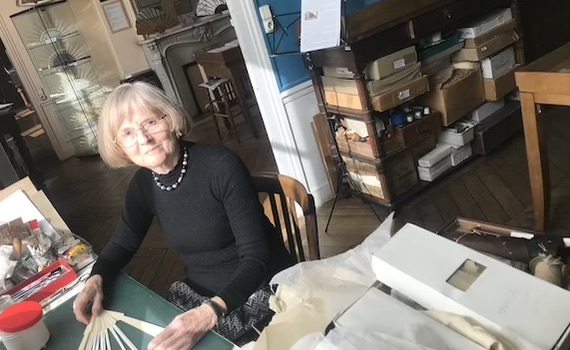 The Paris Fan Shop, known in France as Musée de l’Eventail, is registered as a historical monument. It’s now being forced to close its doors permanently due to rent arrears of 117,000 euros (about $139,200).

Workshop owner and fan-maker Anne Hoguet explains that “in the past few years, the museum had been managed by an association that was responsible for contributing to at least half of the rent” but that they had refused to pay, she told The Epoch Times French edition. This fact, coupled with closures related to the coronavirus, had resulted in a heavy debt to be paid off by the owner by Jan. 23. But public support and a campaign to save the museum has delayed, and may stave off, a permanent closure.

To help preserve the shop’s cultural heritage, Hoguet made a proposal to the city to “transform the shop into a municipal museum.” It didn’t work out. A plea to the mayor’s office resulted in no further help either.

“I have inherited this unique familial patrimony and I have been dedicating my whole life to preserve it. In the workshop, I have been performing many tasks over the past few years: fan restoration, training students, and fan crafting for French luxury brands, fashion shows, plays, and movies,” Hoguet wrote on her crowdfunding page.

The museum and workshop hold centuries-old fans displayed for visitors. Hand fans became a luxury accessory for nobility in the 17th century after explorers initially brought them to Europe from China. It takes an astounding six months and the help of several craftsmen to make just one fan.

Hoguet is the fourth generation of a family of tablet makers. The tablet is the base of the fan, it can be created using wood, mother-of-pearl, or even ivory. Once the tablet is put together, a designer will create the artwork on the canvas. Many of Hoguet’s fans feature exquisite scenes of European aristocrats, while older ones will feature scenes of divinity, adorned with golden embellishments.

Her clients are typically performing arts companies, filmmakers, and haute couture creators. However, her workshop also receives love and attention from students and visitors from all over the world.

Before the pandemic, the workshop offered classes on ways to make and repair handheld fans. Once the coronavirus hit, the workshop was forced to close for a long period of time due to government restrictions. The museum opened for a short period of time in September 2020 but its number of visitors had greatly diminished, leaving little to no income for the historic museum and shop.

If Hoguet doesn’t pay the 117,000 euros, the museum and its 2,500 original pieces could be seized, according to The Independent. This would result in the tragic disappearance of one of France’s unique cultural heritage and legacies, but 74-year-old Hoguet is holding out for a miracle.

“It is a tragedy. I can’t believe Parisians will let a part of their heritage die,” Hoguet said.

A fundraiser was launched by Hoguet in a last attempt to rescue the beloved fan museum and workshop. It has amassed more than 58,000 euros, nearly half of the total funds required to pay off the debt. A petition addressed to the City of Paris was also created by Bertil Fort and has collected more than 20,000 signatures since it started one month ago.

With reporting by David Vives.