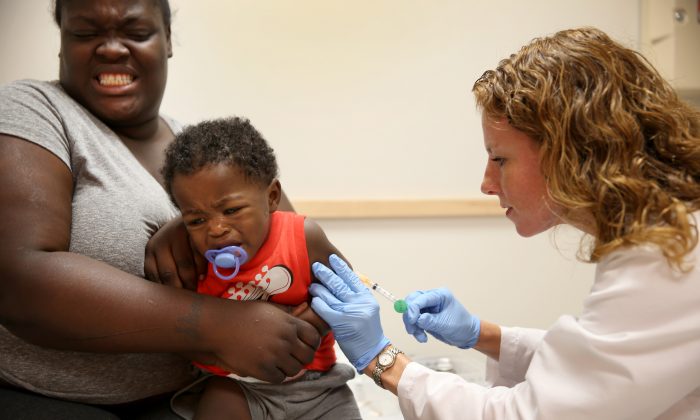 Parents Sue California for Law That Forces Children to Get Vaccinated

Opinions on vaccines vary widely. Some say they are the greatest public health development ever invented, while others believe they are a dangerous, even deadly experiment.

Whatever you believe, the law aims to have every child vaccinated. There is no law on the federal level mandating vaccination. But in all 50 states, vaccinations are required for children to enter the school system.

Most states (except for Mississippi and West Virginia) allow exemptions based on religious beliefs, and 19 states allow exemptions for philosophical objections. But these allowances won’t last for long in California. Last year, California lawmakers passed SB277, a law that allows vaccine exemptions only for verifiable medical reasons.

The new law poses a big problem for California resident and mother-of-two Sharon Brown. Despite repeated assurances from the Centers for Disease Control (CDC), the World Health Organization (WHO), and several peer-reviewed studies that conclude there is no link between vaccines and autism, Brown refuses to vaccinate her kids.

The state has to prove that vaccination is more important than education.

Brown said she wasn’t always wary of vaccines, but her mind began to change when her first born began to develop adverse symptoms after her first round of shots. As the shots continued, the symptoms grew worse.

“I started researching vaccine problems, and once I looked at the efficacy, safety testing, and ingredients in vaccines, we stopped immediately,” Brown said. “My daughter was 9 months old at the time. I’m confident she would be autistic if we [had] continued with the vaccinations. She just couldn’t take it. Our second child is 100 percent vaccine-free, and he’s insanely healthy. He rarely gets sick, and he’s never been on a medication in his life. He’s 7 years old now.”

Once the new law goes into effect on July 1, 2016, Brown’s family will be forced to either vaccinate, homeschool, or move out of state. She’s not interested in any of these options, so she’s decided to challenge the law in court.

“It’s amazing. You see people fleeing war-torn countries to go someplace safer, and we’re going to have to flee California in search of an education,” she said. “Since we don’t want to move, we’ve decided to sue.”

Brown is one of eight plaintiffs in a lawsuit aimed at overturning the California law. They’ve hired controversial trial lawyer T. Matthew Phillips to lead the case.

Phillips proudly calls himself “the most dangerous lawyer in America” because he goes after entities other attorneys won’t touch.

Last year, he was head of a class-action lawsuit against chemical giant Monsanto for false advertising on herbicide labels. However, the case was dismissed when a federal court determined that the California law that forbids false advertising is fundamentally at odds with federal laws governing agricultural chemicals.

For the vaccine case, Phillips’s strategy is to challenge the constitutionality of the California law. Under the state constitution, all children have a right to an education. Phillips says the new law infringes on this right and the First Amendment of the U.S. Constitution.

“In most lawsuits, the plaintiff has the burden of proof, but this case is different,” he said. “Because it involves the First Amendment, the rights of the parents not just to hold personal beliefs, but to freely exercise those in a meaningful fashion, they have a right to assert those objections. So the burden of proof is on the government.

“This is significant. The state has to prove that vaccination is more important than education. As a guy who has been in court for 25 years doing Constitutional law, I can’t think how the Attorney General is going to prove this.”

But what about the rights of the other parents whose vaccinated kids have to attend school with unvaccinated classmates and the potential risk of disease they pose?

The rationale for getting everyone vaccinated regardless of personal belief is called “herd immunity” or “community immunity.” The idea is that if enough people are immunized against an infectious disease, it will protect vulnerable individuals, such as infants, pregnant women, or the immunocompromised.

The impetus for a stricter policy to impose herd immunity in California came in 2015 when a measles outbreak that started in Disneyland led to the eventual infection of 113 people. Since the state was at that time experiencing historically low levels of vaccination, lawmakers insisted that something needed to change.

In a press conference last year for SB277, California Assembly member Marc Levine defended the law on the grounds that vaccination contributes to the greater good. “We live in a society where we have a social responsibility to act in a manner to protect not only ourselves, but others as well,” Levine said, comparing mandatory vaccination to measures such as driving safely or paying taxes.

But Phillips says this “greater good” argument in support of vaccines doesn’t hold up when you consider the big picture.

“They call this a public health crisis, but I don’t know anybody with measles. Do you?” he said. “But we do know that a number of American children have died from vaccines.”

Reason for Lower Vaccination Among Immigrants? It’s Not Distrust

There is no clear way to tell how many lives vaccines have actually claimed, and estimates vary widely. At the high end is Phillips, who figures that an average of one child per month is killed by vaccines in the United States. He also alleges that 10 times as many vaccine deaths are written off as sudden infant death syndrome.

Reports from a U.S. government public database called The Vaccine Adverse Event Reporting System (VAERS), which can be searched through the National Vaccine Information Center, suggests that measles vaccines are actually deadlier to American children than the disease itself. One analysis of VAERS reports finds that over the past 10 years in the United States, measles vaccines have taken 108 lives, while the disease hasn’t claimed any.

However, it’s important to note that the VAERS reports are far from iron-clad proof. These are cases where parents or medical staff suspect that vaccines were responsible for a fatality, but they have typically not been verified.

According to the CDC, all vaccines carry a risk of a life-threatening allergic reaction, but such incidents are considered quite rare—about one per million children. However, Brown believes that the actual number of reactions is far higher because people don’t know what to look for.

“People don’t know how to report an adverse vaccine reaction. We didn’t, and doctors and nurses aren’t trained to look for the signs,” Brown said.

When a parent suspects an adverse vaccine reaction, the doctor automatically rejects the connection.

In a November 2015 lecture in Copenhagen, Denmark, Dr. Suzanne Humphries said that when a parent suspects an adverse vaccine reaction, the doctor automatically rejects the connection. If the parent persists, the doctor responds with hostility, “calling them paranoid, neurotic, stupid, unqualified, hysterical, or dangerous.”

“In my decades within the hospital system, I willingly signed vaccine orders and gave them myself, believing that I was preventing sickness. It came as a total shock to me when vaccines that I administered were causing serious health issues in my patients,” Humphries said.

“After six years of solid research in PubMed literature, looking at information that was never given to me when I was educated within the system, I could see that when I was a vaccinator, I had inadvertent blood on my hands. Science and logic has brought me to where I am to today. Everything is right there in the medical literature, yet academia would rather shoot the messenger than discuss the message or consider the sickness record of vaccinated children.”

For some verifiable evidence of vaccine injury and fatality, visit the U.S. Federal Courts’ website, which features a searchable database of the nation’s vaccine settlements. This is a record of parents who have chosen to sue when they suspected their child was injured or killed by a vaccine.

This “vaccine court” has been in operation for about 30 years, when Congress passed the National Childhood Vaccine Injury Act (NCVIA). The court was officially set up with the express purpose of making the process easier for the family. But critics say the system really serves the drug companies, granting them legal immunity from class-action lawsuits.

“Vaccine manufacturers can’t be sued. If there is an SUV rollover, you can sue Ford or Chevy. If there’s a vaccine rollover, you can’t sue because in 1986 the vaccine makers gave a [bunch] of money to Congress,” Phillips said.

If the court determines that vaccines are the cause of an injury or death, taxpayers foot the bill. As of 2010, the National Vaccine Injury Compensation Program has paid out more than 3 billion dollars in taxpayer money for payouts to vaccine injury and wrongful death claims, with two out of three applicants having been denied compensation, according to the National Vaccine Information Center.

Meanwhile, the number of federally recommended vaccines has tripled.

In a statement for the SB 277 lawsuit, Phillips explains that without the NCVIA’s protection, “Merck, Pfizer, and GSK would lose every lawsuit and in six months be driven out of business by personal injury lawyers.”

He says the act also serves to obscure the damage that vaccines can cause.

“When somebody settles a lawsuit, they make the plaintiff sign a confidentiality clause. It’s a promise not to tell anybody about it so that other people don’t get a bright idea,” Phillips said. “In the vaccine court, when they settle up, they also make parents sign a confidentiality agreement because they don’t want them to tell anybody. They go out of their way to hide when kids die.”

SB 277 requires that students be admitted to school only upon proof of immunization against a minimum of 10 different childhood diseases. However, guaranteeing immunization is trickier than you might expect. For example, according to the CDC, 12 percent of the measles cases tied to the Disneyland outbreak were vaccinated, and some had received at least two doses of the MMR vaccine.

Although vaccinating kids is the aim of SB277, the word “vaccination” only appears once. However, the word “immunization” is used several times. While some may believe that immunization is a suitable synonym for vaccination, it doesn’t really mean the same thing.

“It’s clear to all medical people that immunization is a conclusion that the forcefield is in effect. You can get to that conclusion in a variety of ways,” Phillips said. “By contrast, the word vaccination refers to a syringe.”

“Here’s what’s funny: The state of California presumes that if you get an MMR vax, you have this forcefield in effect. Well, that’s a bold presumption to make. How can they be so sure? Do the vaccine makers guarantee immunization with their shots? No. They don’t guarantee anything. “

“So if the manufacturer can’t prove that the shot brings about immunization, how can the state? The state fundamentally is in error because they falsely presume that every vaccination leads to immunization,” Phillips said.

The lawsuit to overturn SB277 was submitted May 11. Plaintiffs hope to have a court date by July 1