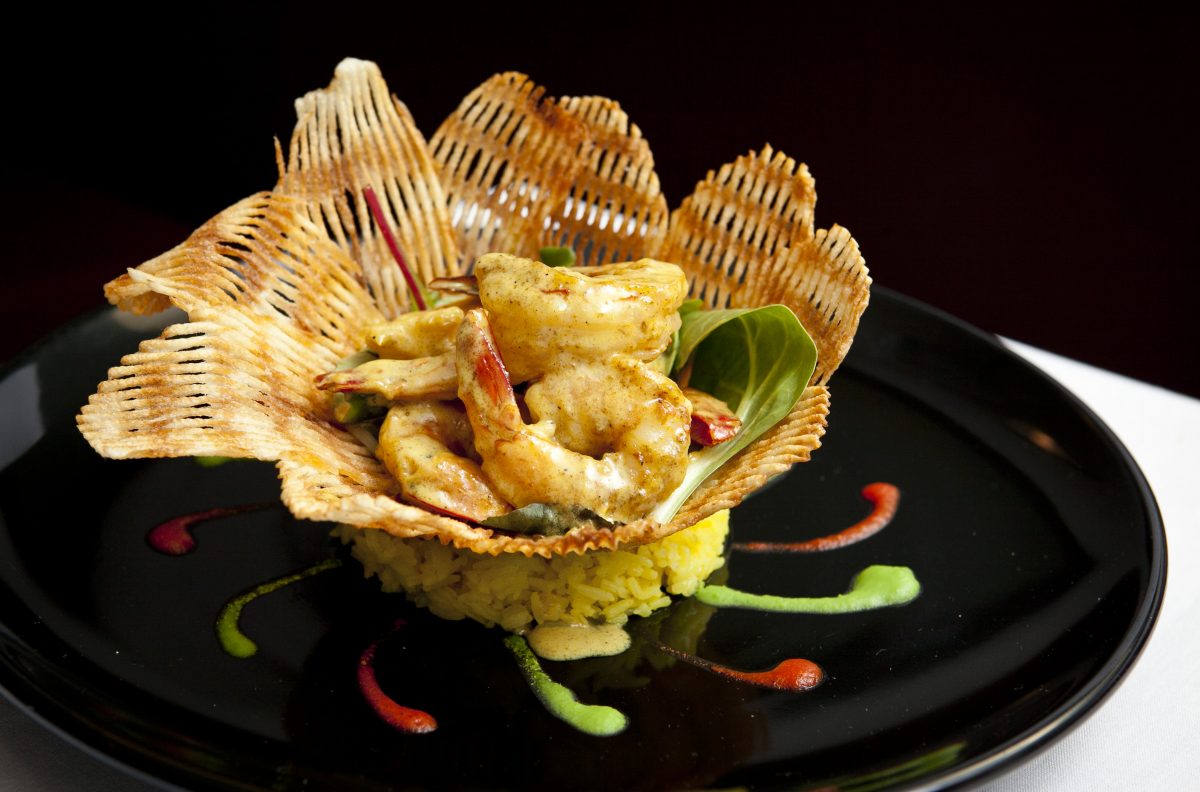 Sauteed shrimp au curry Bengal on a bed of rice at Paname, a French bistro on the Upper East Side. (Samira Bouaou/Epoch Times)
Food

Paname, a French Bistro With Style

NEW YORK—To chef Bernard Ros, French bistros have copied the same formula so much they’ve become something of a caricature.

Ros, however, effortlessly masters the ability to stand apart. The quality at his new Upper East Side bistro, Paname, is unmistakably high—the presentation captivates, while the cuisine enthralls the palette.

He officially opened the restaurant last week. It’s meant to be comfortable, and the vibe is inviting and warm, with cozy leather banquettes and old-time French songs in the background.

“When [people] come in, they are agreeably surprised,” he said. “[They] could be in Paris in a big restaurant or in New York City in what they’d call a 3–4-star restaurant.”

Paname is his eighth restaurant—his first opened back in 1971. Ros makes a point of owning only one restaurant at a time. It’s his way of maintaining impeccable standards, while ensuring his customers get personal attention.

“It’s my livelihood, I haven’t done anything else,” he said. “You should always do what you know the best. To be a bookkeeper, I’’ be a bad bookkeeper; to be a salesman, I’d be the worst salesman. I do what I do the best.”

His culinary prowess, matched with an acumen for buying quality at good prices (and that means, often, in season), and maintaining relationships among his purveyors, have given him an edge.

“You’ve got to fight the prices, know how to buy, or you don’t stay in the business long,” he said.

His relationship with his fish guy goes back 40 years. It’s been instrumental.

Ros chooses the fish himself. “Fish, you got to look at one by one.”

And it pays off—he is particularly known for his fish dishes. “You have a good product, you have a million ways to prepare it. It’s a call for innovation.”

It’s a fairly compact menu, but everything I tried was delicious—and beautiful to behold.

The lunchtime prix fixe is nothing short of a steal, at $19.95, including an appetizer, main dish, and dessert. A la carte, the same dishes would probably be at least twice that amount.

There is no prix fixe for dinner, but the dishes are still an excellent deal.

The Crab Cake appetizer ($10), served with a remoulade sauce, makes for an appetite-whetting start to the meal—all crabmeat, all savory flavor.

As far as mains, a spectacular Sautéed Shrimp au Curry Bengal, redolent of coconut milk and spices, is served on a fragrant bed of rice ($18 lunch à la carte, $24 dinner), and comes on a “potato nest,” made with potatoes fashioned into latticework.

The Atlantic Salmon Steak ($16 lunch à la carte, $23 dinner) was moist and tender, and inspired many ahs and oohs at our table.

Ros said for those who prefer a less pricey main course can opt for salads (such as the harmonious Tomato Mozzarella, or the light Asparagus Vinaigrette salads, $8–$9 for lunch, $10 for dinner) or pastas (Spaghetti Bolognese, $19 dinner, $14 lunch).

A French bistro it is, but Ros also has a pasta selection because he noticed there just wasn’t good pasta in the neighborhood. His spaghetti Bolognese is his third most popular dish after fish and steak, he said, and of course is a favorite of the children.

Once a week, he’ll cook an Asian-inspired dish, from his years cooking or consulting in Asia, including Thailand, Vietnam, Japan, and China, as well as down under in Australia and New Zealand.

People also come in just for the desserts ($9, à la carte), which are as beautiful as they are delicious. The chocolate mousse is a must-try; Ros imports chocolate from Switzerland. The finish is smooth and impeccable, with the taste of chocolate lingering long after.

The deconstructed (or is it reconstructed?) Tarte Tatin, which is already made upside down in the traditional preparation, gets re-invented with a baked apple, and ice cream, surrounded by a lacy globe of golden spun sugar.

Ros keeps you on your feet, and you’re perpetually surprised by his creations.

Sorbets are made in-house, a vivid incarnation of the fresh fruit themselves, and visually complemented by langue-de-chat cookies in designs that Ros draws himself, in this case, women’s legs.

The white tablecloths at Paname are intentionally covered with white paper, as if to say, don’t be intimidated.

It’s a bistro, and that’s what Ros wants it to be: friendly to diners, and friendly to wallets. He’d rather see you come in twice a week or month (indeed, some customers are daily regulars) than twice a year.

Paname has all the makings of a neighborhood spot already; but the quality and prices should make it a destination.

To keep up with what’s cooking in the food and dining universe, follow us on Twitter @EpochDining