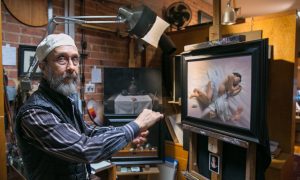 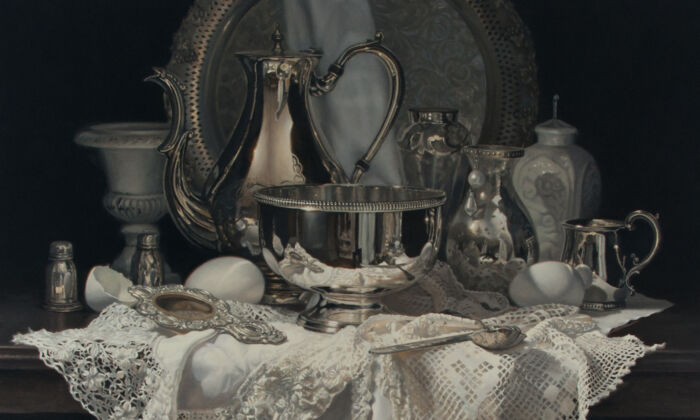 Canadian artist Susan Paterson meticulously creates realistic still-life paintings. Her harmonious paintings evoke an inner calm, while paying homage to the fine craftsmanship of the past, and an awe for these once everyday objects.

Paterson hopes her paintings cause people to pause, to ponder, and to marvel for more than a moment at the still-life treasures unfolding before them, she said in a phone interview.

Her art today would’ve been completely different if she had paid attention to some of her college professors or to those who said her paintings were “not real art.”

While the rest of her family—her parents, brother, and sister—were musically gifted, Paterson found her harmony through painting. At age 12, she began oil painting classes, falling in love with the medium. She continued the classes until she went to college.

In the late 1970s, Paterson started at Mount Allison University in Sackville, New Brunswick, Canada. She recalls only a couple of professors teaching true to the realist tradition. The remnants of traditional atelier training were still there, yet they were not being used. For instance, the college had the traditional plaster casts for drawing practice, but they were gathering dust since new professors were not concerned with developing traditional drawing and painting skills; instead, they began to teach abstract and conceptual art.

Paterson almost quit after one professor wanted her to paint an abstract painting: She couldn’t. Conceptual and abstract art had never interested her. “It didn’t seem like much of a challenge. I never understood it at all,” she said. Paterson won out, and she never painted that abstract picture.

She persevered at college, graduating in 1980, the year that is considered the last time that students at Mount Allison received some traditional realist training.

One of her professors was a watercolorist, so after college Paterson naturally found herself favoring watercolor paintings rather than oils. For many years, she happily painted landscapes from photographs, exhibiting her art in the Maritime provinces, and sometimes in Toronto and Vancouver.

Around 10 years ago, Paterson’s art changed. She was planning a watercolor painting akin to the traditional Dutch floral paintings. And while online researching the Dutch tradition, she stumbled across a traditional Dutch oil painting course at the School of the Museum of Fine Arts, Boston. The course ran over a whole term, which didn’t suit her, so she wrote to the museum requesting a workshop.

The workshop was a pivotal point in Paterson’s career. She learned the different mediums and mixtures used in Dutch oil painting. She was particularly interested in the different glazes used. She also learned how to create a lively, interesting still-life composition by arranging objects in a box with one light source. From then on, Paterson specialized in still-life paintings.

The Enduring Appeal of Still-Life Paintings

Paterson often gets told that her paintings—full of bygone treasures such as aging lace tablecloths, highly polished silver teapots, and blue-and-white porcelain bowls—remind people of their grandparents’ belongings. It’s one of the reasons why she believes that still-life paintings should be given more credit: The objects in a still-life painting are often familiar to people, whereas portrait paintings of a stranger, which are deemed easier to sell, can be harder to hang in a home, she explained.

It seems that Paterson’s paintings are an extension of the decorating style in her home. She lives in a 120-year-old house filled with old and antique objects.

For her paintings, she found some of the objects in antique shops and others were gifts from friends or heirlooms from her grandparents. “Lots of people give me silver, especially because nobody wants it anymore. They don’t want to have to polish it,” she said.

Her enthusiasm for old and antique items also comes from her grandparents. “It’s so regal, all of it. I just love the workmanship, the craftsmanship, that goes into all these pieces,” she said.

Often, budding artists are unaware of the amount of work and discipline it takes to produce such detailed art like hers, she said. “People think you have to be inspired to go up there to your studio and paint, but I do treat it like a job,” she said.

“I work Monday to Friday, six or seven hours a day, and I just love it. … Seeing [a painting] come to life in front of you, at every stage more and more detailed, and more and more lifelike, it’s a thrilling process.”

Sometimes a painting can take three to four months to complete, so she normally works on two or three paintings at a time while the oil paint slowly dries. Sometimes she’s even had to polish a silver piece in her arrangement, and more often has had to dust the pieces as the dust settles on them over time.

Larger works, such as “Artist’s Collection,” can take 200 hours to create. She can spend 35 to 50 hours on the drawing alone to get every aspect of the composition accurate before her paintbrush connects to paint and panel.

Most of Paterson’s pictures have triangular compositions with taller objects in the middle and one focal piece. Every other object in the painting is arranged to complement the main object and bring the viewer’s attention to it, she said. Often she places eggs in her paintings, enjoying how the pure white shell breaks up the picture and how the simplicity of the form captures shadows.

Paterson notices and carefully captures every inch of detail. “I just love detail,” she said. She especially enjoys depicting the reflections on the silver. Reflections surround us every day, yet we may not notice them, she said. She piques people’s interest as she points them out in her paintings. “You see different worlds in the silver reflected back at you,” she said.

Often favoring a monochromatic palette, particularly gray, Paterson delights in subtle colors and white flowers especially. “But every once in a while, it’s nice to call up the orange and yellow paints and do something a little different,” she said. At those times, she’ll paint richly colored fruit such as a juicy sliced peach, a bowl of fresh cherries, or a plate of ripe strawberries.

Painting fruit brings a different pace and challenge because Paterson paints from life and often the fruit doesn’t last long. First, she’ll draw the fruit and then transfer her drawing onto the panel in preparation to paint. But the fruit she actually depicts will be a fresh arrangement, because even on the second day the highlights aren’t quite as crisp, she explained.

The Budding Realist Tradition of Painting

In 2014, Paterson organized an exhibition along with six Nova Scotia-based realist artists at the Dalhousie Art Gallery based at Dalhousie University; 28 Nova Scotian artists exhibited. It was the most popular show in the entire history of the gallery, she said.

Despite the show’s popularity, it wasn’t enough to secure an exhibition at the Art Gallery of Nova Scotia in Halifax. The gallery refused the show, but it later opened the exhibition at its adjunct gallery in Yarmouth.

For the past 10 years, Paterson has seen a positive rise in realist art. “I think people are just getting tired of conceptual art and some of the paintings that they don’t understand, and wanting to get back to something that’s a little more understandable. I think a lot of people felt alienated and just stupid going to museums because they can’t relate,” she said.

“Now, there’s such an explosion of schools that teach the old traditional ways, which I would’ve loved,” she said.

“I’m so happy about it because for so many years I was kind of alone in that department, for the most part. For a long time, I’d been told these paintings are ‘not really painting,’ ‘not real art,’ and to ‘loosen up’ and always change my art. But I always stuck with it, and now it’s really paying off.”

She’s grateful for organizations such as the New York-based Art Renewal Center (ARC), which help promote realist ateliers and artists through events such as the International ARC Salon. Paterson’s painting “Artist’s Collection,” came second in the still-life category of the 14th ARC Salon. Two of her paintings, “Silver and Eggs” and “Studio Reflections,” have just been shortlisted for the semifinals of the 15th ARC Salon.

Paterson gets a lot of requests for commissions, but she doesn’t do them anymore. She simply paints her little treasures: “I just am really happy doing what I want to do, using the props that I have, that I love,” she said.

To find out more about Susan Paterson’s art, visit SusanPaterson.ca