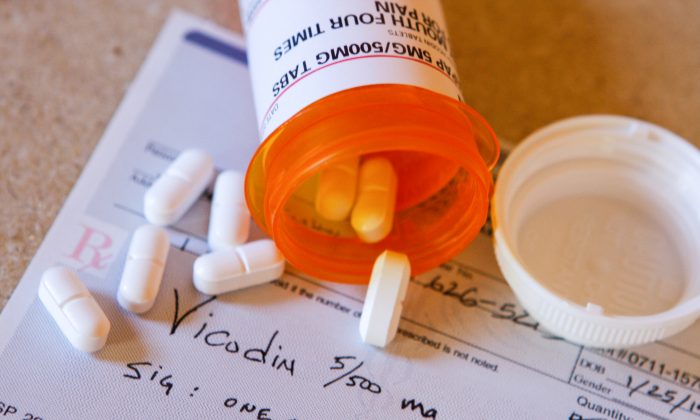 Vicodin medication on a prescription form at a doctor's office in California on Dec. 13, 2012. (Maria Daly Centurion/Epoch Times)
Health

America’s prescription drug abuse problem is stronger than ever. The latest figures (from 2011) reveal more than 17,000 drug overdoses a year. The current rate is estimated to be much higher.

A new study from the Centers for Disease Control and Prevention (CDC) finds the number of overdose deaths caused from opioids—a drug class which include hydrocodone, oxycodone, and morphine—has quadrupled since 1999.

According to New York City Health Commissioner Mary Travis Bassett, these deaths are nearly all preventable. “We can through a combination of efforts bend the curve,” said Bassett at a recent press conference by the Big Cities Health Coalition (BCHC).

On Sept. 16, Bassett joined fellow BCHC members in Washington to urge Congress to support a new national strategy to confront the ravages of prescription drug abuse. The plan focuses on harm reduction. A major point of the pitch is better access to Narcan—the brand name for an overdose antidote drug, naloxone.

Experts say Narcan is safe and effective, but only if it is administered in the few hours before an overdose becomes a fatality. Since many states restrict naloxone to a doctor’s prescription, time often runs out.

Some cities are easing restrictions in an effort to save lives. Since 2009, New York has made Narcan available to relatives or friends of addicts. Bassett said increasing the reach of naloxone has been so successful the New York City health department is now working with police, fire fighters, and other first responders in a pilot project to make the medication even more accessible.

“The number of lives saved in New York and elsewhere would increase substantially if naloxone were available over the counter,” said Bassett. “But we need federal level work with the manufacturers to make this lifesaving drug more available.”

For many years Naloxone was only available as an injection, but the Narcan Overdose Rescue Kits BCHC favors are administered via a nasal spray. Naloxone has no effect on a drug-free individual, but in a user it blocks the opioid experience for a half an hour or more, reversing the respiratory shutdown that happens in an overdose.

A Narcan kit costs about $50 and consists of two doses of naloxone and latex gloves. The manufacturer states that too much heat, cold or sunlight exposure can weaken the product’s effect over time, but an older dose “will not hurt the victim” if used.

Bassett said that in New York over 500 potential overdose deaths have been reversed and reported due to Narcan kits. “We think many more have probably been reversed but we don’t hear about all of them,” she said.

The New York City health department has targeted its Narcan distributing efforts on Staten Island, which has had more than four times as many overdose deaths than the rest of the city. But elsewhere in the country bigger problems are receiving much less attention.

According to the CDC, West Virginia suffers from the highest level of drug overdose-related deaths in the United States by far. However, the state also has no law to protect a non-medical first responder who administers naloxone.

In 22 states, an unqualified person who administers naloxone in response to a drug overdose could be sued. Most states have adopted a good Samaritan law to encourage overdose intervention by friends and family. BCHC wants to spread the law nationwide to remove all threat of prosecution.

“The concern about harm reduction historically is that it’s seen as tolerating addiction because we do not insist that people enter treatment, Ferrer said. “The way we see it, Narcan saves lives. It gives active users an opportunity to live to the next day and hopefully to decide to get clean.”

Boston has expanded prevention services and treatment options in response to the prescription drug epidemic. They’ve also set up drug take back kiosks to collect unused prescription opioids, and pushed for better access to treatment, including an increase in the number of days insurance companies must pay for a drug detox.

But Ferrer said that even though the local government, non-profits, and the medical community are deeply committed to fighting the problem with everything they have, options and resources are limited.

“It’s taking its toll on families, neighborhoods and city budgets,” she said.

Some are trying to recoup these costs by suing the dealers. In May 2014, two California counties filed a lawsuit against five top pharmaceutical companies for using deceptive marketing campaigns. In June, the city of Chicago filed a similar claim against the same companies, seeking compensation for all damages, and forfeiture of industry revenue obtained through deceit.

“After a year-long investigation into their practices we are convinced that the drug companies are fueling this epidemic,” said Dr. Bechara Choucair, commissioner of the Chicago Department of Public Health.

According to Choucair, drug companies presented prescription opioids as rarely addictive, having few negative side effects, and suitable for chronic pain. As a result, doctors began prescribing these drugs for conditions they were never meant to treat. Choucair said that according to some reports, one in every five physician visits in the United States result in an opioid prescription.

“Contrary to what the industry told doctors and patients this is a very powerful addiction,” he said. “As a result, families have been shattered, careers were lost, and lives were destroyed. This is the public health impact of the prescription opioid epidemic.”

Choucair recommends an “all hands on deck” approach to addressing the prescription drug crisis, including educating physicians about the proper use of opioids, and maintaining a state-level registry to monitor prescriptions.

But some precautions have had unintended consequences. While doctors have curtailed their painkiller prescriptions, and drug companies have implemented formulation strategies to prevent further abuse, the result has been a growing demand for heroin—an opioid with a propensity for addiction that no one disputes. Today, heroin has become cheaper and easier to obtain than its prescription cousins.

“We found that the seizure rate for heroin went up 232 percent during 2013. There was much more supply,” said Susanna Arntz, a researcher for Heroin.net. “Heroin isn’t just isolated to one region. It’s everywhere in the country right now.”

One unlikely ally in the overdose epidemic is marijuana, although health officials are not actively seeking its help. Cannabis has long suffered a reputation as a gateway to stronger substances, but relaxed marijuana laws may reduce prescription drug overdoses. In Aug 2014, the journal JAMA Internal Medicine showed that states with medical marijuana laws have rates of opioid-related deaths 25 percent lower than states that don’t allow it.

“It’s a story of the lesser of two evils,” said Arntz. “It makes the case for pro-marijuana legalization as far as when you look at overdoses exclusively. Very few people if any overdose from marijuana.”

*Image of “pills” via Shutterstock