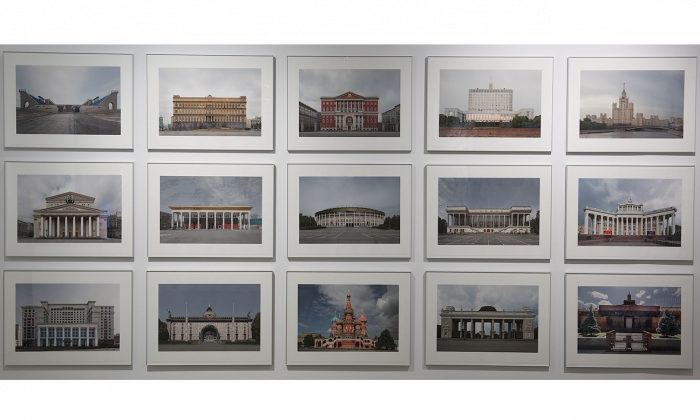 Other Times and Places in Three Ottawa Art Shows

Gusts of wind, tumbling leaves, and dropping temperatures tell us, in the words of Bob Dylan, “the times, they are a’changin.'” Summer gives way to autumn, stray thoughts of other times and places fly past, too. We see this sensibility in three current Ottawa exhibitions.

“Big Bang” at SAW Gallery, an artists-run centre in Ottawa, is a large exhibition showcasing the work of 14 artists of the Ottawa-Gatineau region. Its curator is Jason St.-Laurent, SAW’s director.

In the work of several of the 14 artists, the imagery has been based on distance, even of matters not to be questioned. “The Moscow Photographs: Stalin’s Architectural Legacy, 1922-2012” by Leslie Hossack, for example, is a suite of 15 architectural photographs. Each of the 15 structures photographed stands on cleared, level ground. Hossack’s three rows of photographs, seen in sequence, are documents of buildings erected rigorously, imposed on the land. Their structures demonstrate a rule of mind over matter, intellect over emotion.

Among the sites Hossack photographed in Moscow are Lenin’s tomb, constructed 1929-30; an entrance to Gorky Park, built 1955; the Ukraine Pavilion, constructed 1938-39; and the 16th-century St.Basil’s Cathedral.

Justin Wonnacott’s five photographs are also disquieting images of disconnect and distance. There are no people, houses, birds, or animals to be seen, and no indication where the photographs were taken. We see only a bit of detritus at the side of an empty road, or the sand of a quiet seashore.

In Yuristy’s hands, the pictures on display are images of wonder—wild, big, strong landscapes of magnificence.

Eric Walker’s aerial view, “Chicago and the Lake,” presents yet another image of distance and disconnect in the SAW exhibition. Walker’s view of the neighbourhood is that of a mechanical grid, seen from an airplane window, at a very great distance high in the sky—location without purpose, patterns of right angles against the lake’s ragged edge. No telling where the airport might be.

Leslie Reid’s large oil painting, however, is a different matter entirely. At first sight, it appears to be a calligraphic line of white against a softer, greyed yellow. But a closer look shows that it, too, is an aerial landscape. The artist’s subject is a terrain flattened by distance, a scene of frozen waters in faraway hills. The painting’s title “Kaskawulsh 60º41ºN 137º53ºW,” references the precise aerial coordinates of that landscape.

In 2013, Reid spent three weeks travelling across northern Canada and the Arctic in military helicopters. Her flights were sponsored by the Canadian Forces Artists Program. Reid was permitted to locate and photograph the lands her father had patrolled during the Cold War. Her painting is based on those photographs.

At the far end of the gallery hangs Frank Shebagaget’s “Beavers.” Shebagaget suspended perhaps 100 or more model airplanes, from floor to ceiling, in an orderly circular formation. Each model, about eight inches in length, is the same as the other; all are made of basswood, nylon, and metal. “Beaver” is the familiar name of the float planes used in Canada’s north.

Amy Schissel’s montage work, “Animate Grounds,” fills another wall of the gallery. Once again, we see an artist’s use of aerial perspective to indicate terrain known only through radar and sonar. We cannot walk here. These are all lands surveyed as Cold War defense perimeters, lands seen as interference patterns.

Rothwell Gallery, owned and operated by Rehana Mufti, often shows work by artists new to Canada. Mufti herself is an immigrant.

Ottawa’s local history is not that obvious to the new arrival. The city’s heritage buildings are not old. The streets are not cobblestoned. A sense of place as picturesque is not readily obtained walking Ottawa’s streets if one has come from an older world.

Artist Joseph Coban hails from Ukraine, by way of Czechoslovakia. He arrived in Ottawa in 1999 and soon found his way to Upper Canada Village. There, he found an imagery he understood better from his own European history.

In several of Coban’s oil paintings on display at Rothwell Gallery, we sense the artist’s attentive affection for the workers at Upper Canada Village. “Another Chair from Morrisburg,” for example, is a portrait of the woodworker at his craft. “Spelling Lesson from Morrisburg” portrays a teacher at her task. Students stand tensely, waiting to be called upon.

At Cube Gallery, we find artist Russell Yuristy’s view of the forest. Born in Saskatchewan, the artist knows the old-growth forests of Canada well. He has walked the trails, long, hard, and respectfully.

In Yuristy’s hands, the pictures on display are images of wonder—wild, big, strong landscapes of magnificence. “Rocky Mountain Fir,” for example, is one tree, drawn large, in order to create a very big woodcut print (51″ x 27″) of that tree. The artist did not stand at a distance, looking at the big tree. He stood right under it, looking up and along its trunk, into the branches. That is the view we see here, too.

“Two Oaks” is another large Yuristy woodcut print, 48″ x 32″. In this composition, the trunks of two trees in the foreground frame the view beyond. These woods are dark and deep. Walk carefully. A coyote, however, might step out to look at you. If so, Yuristy’s etching, “Coyote,” could be the result. Leaving the woods, you might take note of horses across the way. The artist did, and drew two of them—their heads nuzzling—to create a lithograph series titled “Friends.”

Daylight Savings Time is with us until Nov. 1. Winter comes soon after, if not before. The bear hibernates. The artists, however, are at work in their studios.

Maureen Korp, Ph.D., is an independent scholar, curator, and writer who lives in Ottawa. Author of many publications, she has lectured in Asia, Europe, and North America on the histories of art and religions. Email: miki.korp@gmail.com