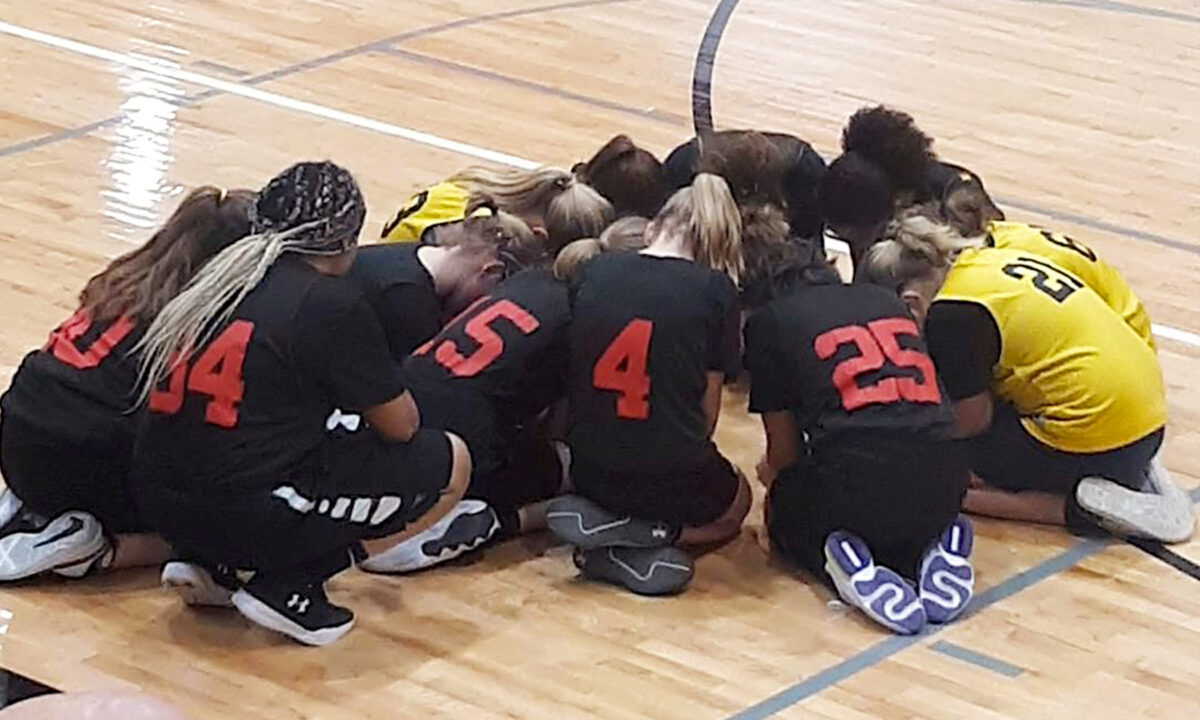 When a player’s grandfather fell ill and became unresponsive in the crowd during an Iowa youth basketball tournament, attendees called 911 and the play was halted. Immediately, a group of fourth- to sixth-grade girls, from opposing teams, formed a prayer circle of their own volition.

The mother of one of the players caught the moving moment on camera.

The tournament, which was held in Seymour, Iowa, on Feb. 5, included fourth-, fifth-, and sixth-grade teams from various towns.

“All of a sudden, a man from our Mormon Trail crowd started to slump forward, his eyes rolled back, and he became unresponsive,” Staci told The Epoch Times. “He was laid on the bleachers, 911 was called, and people in the crowd who have medical knowledge quickly took action.”

Staci, who was sitting close, went over to see if she could help the grandfather of one of the Mormon trail fifth graders.

It was then that Staci noticed movement down on the court; a clutch of Mormon Trail fourth- and fifth-grade players, and a few sixth-grade Seymour girls, were in a circle on their knees with their heads bowed in prayer. As they prayed, others joined in.

“Apparently, one Mormon Trail girl had started the circle,” said Staci, who claims witnessing this profound act brought tears to her eyes.

“These kids did the best possible thing they could do in that moment, and for two opposing teams to join together for something more important is amazing!” she reflected. “Something inside me just screamed, ‘Catch this moment!’ It’s something you don’t see often, the positives in the world.”

Staci snapped a photo of the young players’ prayer circle and shared it on Facebook. The photo, and story, was soon picked up by KCCI’s Eric Hanson who shared it on his own Facebook page, reaching thousands.

Following the prayer circle, Seymour beat Wayne. Staci said she was “definitely cheering for them after their kind act.” Meanwhile, the grandfather, who became unresponsive during the game, was discharged from hospital the same night, and Staci’s family even saw him at First Baptist Church—the church they both attend—in Humeston the following morning.

Staci, who has been assistant manager at a local grocery store for 13 years, coaches her son’s sixth-grade basketball team alongside her husband. Their daughter, Abby, plays on the fourth- and fifth-grade team at Mormon Trail School.

She hopes that sharing this special moment will encourage others to see the goodness in these young players’ hearts.

Staci told The Epoch Times: “Kids have such a bad reputation; people focus on the bad things too often … I wanted people to see how kids who don’t even know each other can come together and pray.

“Most people don’t want to take the time to thank God, pray, or ask for help. They are too busy or find it too embarrassing. Hopefully, the way this picture has been shared will draw people closer to God.”

Staci said that she’s received positive reactions with only one negative response to her Facebook post, to which she reasoned: “That person still was taking time to look at the post.

“Many people, church-goers and non-church-goers, told me this picture brought tears to their eyes, so if this causes even one person to begin a relationship with God, then it served its purpose,” she added.

Share your stories with us at emg.inspired@epochtimes.com, and continue to get your daily dose of inspiration by signing up for the Bright newsletter at TheEpochTimes.com/newsletter</em