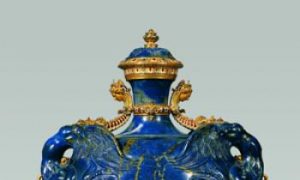 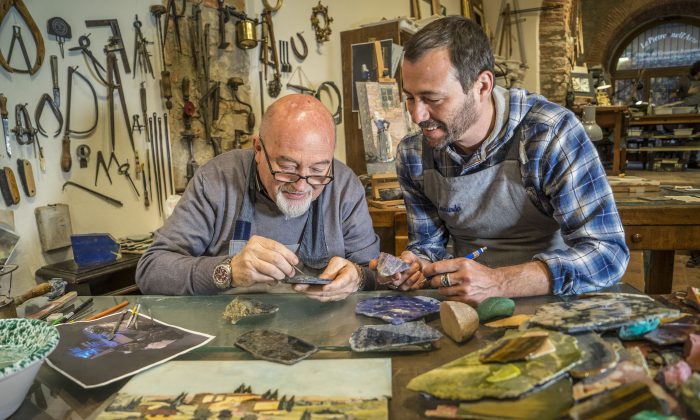 Only in Florence: The Artistry of Semiprecious Stone Paintings

Everyone who enters the Scarpelli Mosaici workshop in Florence, Italy, is told the story of “commesso Fiorentino” or Florentine mosaic.

“It’s a big investment, but it’s our mission to teach people about this special art that is only found in Florence,” said Catia Scarpelli, commercial marketing manager at Scarpelli Mosaici, in a phone interview.

Surprisingly, around 90 to 95 percent of Scarpelli’s customers are American. “American customers come to Florence to find history and tradition,” Catia said. Both are found in the Scarpelli Mosaici workshop.

Scarpelli Mosaici artisans make remarkable commesso. Lively, painterly images, which many a painter might find challenging to accomplish with a paintbrush, leap out of the hardstone mosaics.

Commesso is not to be confused with Roman mosaic, whereby squares or rectangles tessellate (fit together exactly) to make an image. In commesso, semiprecious stone veneers, some from the local Tuscan landscape, are cut into different shapes and sizes to form a picture—no pigment or paint is added.

Nature provides the color palette. The shades within each stone guide an artist as to where a piece needs to go. An artist can take a week, or even a few months, to find a stone that’s the right color and shade for a particular picture, Catia said.

The commesso Fiorentino technique has been around since the Renaissance. The first recorded piece of commesso Fiorentino was in the late 14th century, but it wasn’t until the 16th century that it gained popularity through the Medici family. First, the second grand duke of Tuscany, Francesco I, commissioned Italian mannerist painters to make commesso, or “pittura di pietra,” paintings in stone. Then in 1588, Ferdinand I, the third grand duke of Tuscany, opened the Opificio delle Pietre Dure (hardstone workshop), which was purely for commesso work.

In the 17th century, most of the mosaic produced at Opificio delle Pietre Dure was for the Medici funeral chapel at the church of San Lorenzo. Florentine artists were employed in courts across Europe as commesso gained popularity in the 18th century.

Catia’s father, Renzo, is one of a handful of master craftsmen still practicing commesso in Florence. Yet he came across the art purely by chance.

At the age of 13, he knew that staying on at school was not for him. He didn’t know exactly what he was going to do for work, but whatever it was, he had to be working with his hands.

One day, he happened upon a master craftsman standing in the doorway of his workshop. Curious, Renzo asked him if he could come inside and see what they were doing. Renzo had always been artistically gifted and was so fascinated by commesso that he asked the master if he could come back often and learn. The master agreed but told him to bring his father to the workshop to discuss the apprenticeship.

Renzo’s father, however, was far from pleased: “You want to be an artist! You will never see your children,” he said. But Renzo was determined, and his obvious enthusiasm for the role melted away his father’s apprehension. Renzo even worked nights in a print workshop to pay his own way through a professional art school to learn fine art and decoration.

After many years at the workshop, Renzo said to his master, “I’ve learned to cut stone, but I haven’t made my own commesso.”

“Now you are ready to leave,” his master said. “You will discover your art in your own workshop.” Renzo left the workshop after 11 years as an apprentice, without being paid a penny.

He opened his first workshop in another town, with financial backing from his girlfriend’s (now wife’s) parents. It wasn’t easy, but his passion, hard work, and his family’s faith in him all paid off.

“We have to thank him for everything that he did without any money at all,” Catia said.

A Traditional Workshop in the Heart of Florence

Now, the Scarpelli Mosaici workshop can be found in the center of Florence, near the famous Basilica of Santa Maria del Fiore, commonly known as the Duomo.

Most companies are moving out of Florence because of the high overhead. Although expensive, Scarpelli’s move to a workshop in downtown Florence was a necessary one, Catia said. It was necessary for her father to realize his dream: to work in the heart of Florence once again and to be in direct contact with his customers. He wanted them to see artisans making commesso, just as he had seen them as a boy.

In Renaissance times, the master would traditionally have helpers in the workshop. The same is true at Scarpelli Mosaici. Two of Renzo’s craftsmen were once his apprentices, one of whom is about to turn 60 and has been working with Renzo since he was 16 years old. Even the shop assistant has been working at Scarpelli Mosaici for 12 years. It’s easy to see why Catia says, “They are all a part of the family.”

Catia is not the only blood relative involved in the business. Her mother, Gabriella, helps with sales and makes her own stone jewelry; and Catia’s brother, Leonardo, has inherited his father’s artistry as a gifted commesso master craftsman.

At any time of the year, seven days a week, you can see the artisans at work in Scarpelli Mosaici. “It’s not a show,” Catia explained. “It’s natural for us [to work this way], like it used to be in the past,” she said. It’s a way of working that Catia believes is largely “now lost in Florence and all over the world.”

Catia hopes that one day we can return to how craftsmen worked when her father was a child: working next-door to each other and sharing one another’s skills.

To find out more about commesso Fiorentino, visit Scarpelli Mosaici