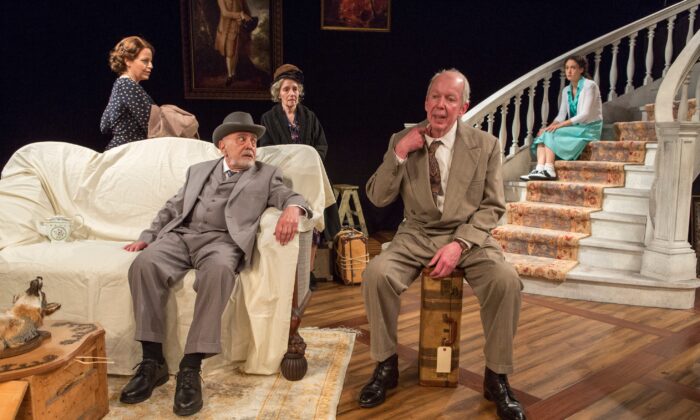 Online-Theater Review of ‘A Picture of Autumn’: Do We Prefer Security or Something New?

The inevitability of change and how that’s perceived by different generations is the central theme of N.C. Hunter’s 1951 play “A Picture of Autumn.” The Mint Theater Company is now streaming a live recording of its 2013 production of this work.

The story takes place at Wilton Manor, a secluded English country estate. Home to the Denham family since 1762, the lack of the proper funds has caused the house and surrounding grounds and outbuildings to fall into disrepair. In fact, the driveway of the manor house has become so overgrown that it will soon be impassable to cars.

Returning to the family home is Charles and Margaret’s eldest son Robert (Paul Niebanck). An officious and take-charge sort, he has just finished a lengthy posting abroad. Accompanying Robert are his wife Elizabeth (Katie Firth) and Felicity (Helen Cespedes), her daughter from a previous marriage. Felicity bears a strong resemblance to Harry’s long-dead wife.

Also arriving is Robert’s younger brother, Frank (Christian Coulson). Somewhat of a ne’er-do-well, Frank is perennially broke, always running from one adventure to another, and may have his own history with Elizabeth.

Concerned about his family living in a home that may soon become too much for them to manage, Robert has contacted a group interested in buying the estate and turning it into a technical college. The proceeds from the sale would allow his parents and uncle to live comfortably for the rest of their lives, albeit in much smaller surroundings. However, it quickly becomes obvious that Charles, Margaret, and Harry don’t want to leave the place they have called home for so long, despite all the practical reasons for doing so. Each of the three defers the decision to the others, with no one wiling to take the first step.

Containing more than a few echoes of Chekhov’s “Uncle Vanya”—with someone coming into a home and upending everyone’s life—”A Picture of Autumn” explores how the concepts of home, comfort, and happiness can change as one grows older and options become limited. This point is made clear when a defiant Felicity, who has become quite close to Harry, loudly proclaims that she would never leave Wilton Manor if it were her home. To which Elizabeth quietly replies, “You’re not 70.” Elizabeth herself begins to appreciate the security that can come with settling down and accepting things Felicity has yet to experience.

Morfogen, as Harry, particularly stands out among the cast. Initially coming off as an aged man firmly set in his ways, when the question of leaving home comes up, it is he, with uncharacteristic directness, who finally points out that they don’t have to continue on their current path and that there are other possibilities still ahead—if they have the courage to go after them. Morfogen is also excellent in his scenes with Cespedes as Felicity; their interplay reveals moments of wistfulness and sorrow. For example, Harry remarks how Felicity has so much time in front of her while he has so little.

Niebanck gets to show more than a stereotypical turn as Robert. The character transforms from someone sure in his actions to quietly questioning the way he has lived and whether he’s been a good husband.

Tanner is fine as Margaret. Her sometimes good-natured complaints mingle with nostalgia for how things used to be. Hogan works well as Sir Charles, a man who never seems to be able to make decisions about anything and is often one step behind in a conversation.

Firth strikes a quietly poignant note as the content, yet perhaps unfilled Elizabeth; while Coulson is good as Frank, a man whose continual moving about may be a way to keep regret from catching up with him.

Director Gus Kaikkonen allows the action to proceed at a leisurely pace, thus letting the audience be slowly drawn into the story. He also permits frequent flashes of dry humor in the script to burst through, which help things from becoming maudlin.

The set by Charles Morgan nicely projects a worn and tired look. William Armstrong’s subdued lighting helps set that mood, as do the costumes by Sam Fleming. These range from Robert’s immaculate attire to Frank’s causal appearance, to the worn-out clothes for Charles, Margaret, and Harry.

“A Picture of Autumn” is a touching story in which generations look at life with tired resignation, a touch of defiance, or the occasional hopefulness of something better to come.