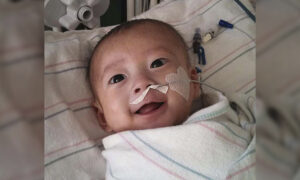 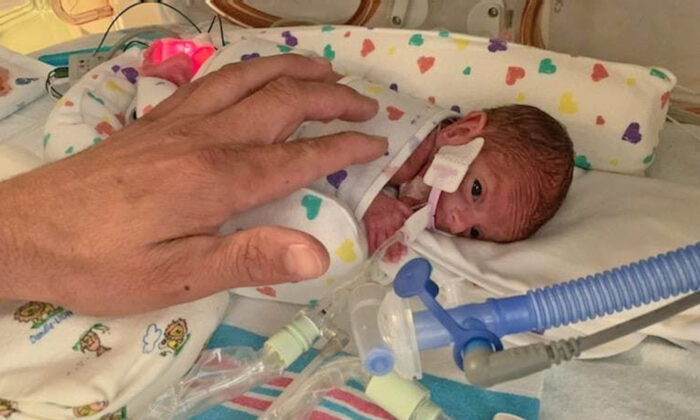 Baby Russell William Appold Jr. is a record breaker: He is the youngest gestational-age baby ever to leave Tulane Lakeside Hospital’s NICU, the hospital said in a press release.

Natasha’s journey to third-time motherhood was a hard one, she told Good Morning America (GMA). She endured three pregnancy losses before baby Russell, and upon learning that she was pregnant again, “didn’t want everyone to get their hopes up.”

“If it wasn’t for [the doctors], and God, I don’t think he would be here,” Natasha told GMA.

Doctors reassured her that the baby had “a strong heartbeat,” but at just 15 weeks, Natasha’s cervix started to open. She underwent immediate surgery to prevent preterm labor, the report said. On May 20, however, the first stages of labor kicked in.

Neonatologist Dr. Jay Goldsmith said in the press release that they discussed the “neonatal outcome estimator information” with Natasha over the next two days. “She decided to go for it,” Dr. Goldsmith said.

The mom was in labor for two days. Baby Russell was born weighing just 1 pound, the statement said.

Dr. Goldsmith was able to “resuscitate baby Russell in the delivery room.”

Baby Russell was considered a “periviable birth” at 22 weeks, meaning he was at risk of serious health complications.

“That was the beginning of long journey for baby Russell and his family,” the statement said. “Over the course of 19 weeks, Russell Jr. fought for his life and slowly made progress.”

The odds are against these babies. However, the hospital said, “through medical advances in neonatal resuscitation and care, approximately 14 percent of babies born at 22 weeks survive.”

Baby Russell came into the world with jaundice and blood on his brain. His team administered breathing tubes, and the tiny baby headed to the NICU for what would turn out to be a four-month fight for life.

With time, baby Russell’s lungs matured and his breathing improved; he gained weight and was able to sustain a stable body temperature on his own, the hospital said. The little fighter came out of his life battle victorious.

On Oct. 1, the warrior baby Russell went home amid a surprise corridor parade: sitting on his mini-royal wagon wearing a cute paper crown, he looked like an adorable little prince. The hospital shared moving footage on Facebook.

Natasha started a Facebook page, “Baby Russell’s Journey,” to chronicle her baby’s amazing development and create a space for other preemie parents to discuss their experiences.

“He was so small he could fit in my hand,” Russell Sr. said in the press release. “But now he’s a chunky baby.”

“As he grows, we will tell him stories of the dedicated nurses and doctors and staff members at Tulane Lakeside Hospital who helped a 22- week-old baby get to the point of coming home,” the grateful Natasha wrote in a card to hospital staff members.