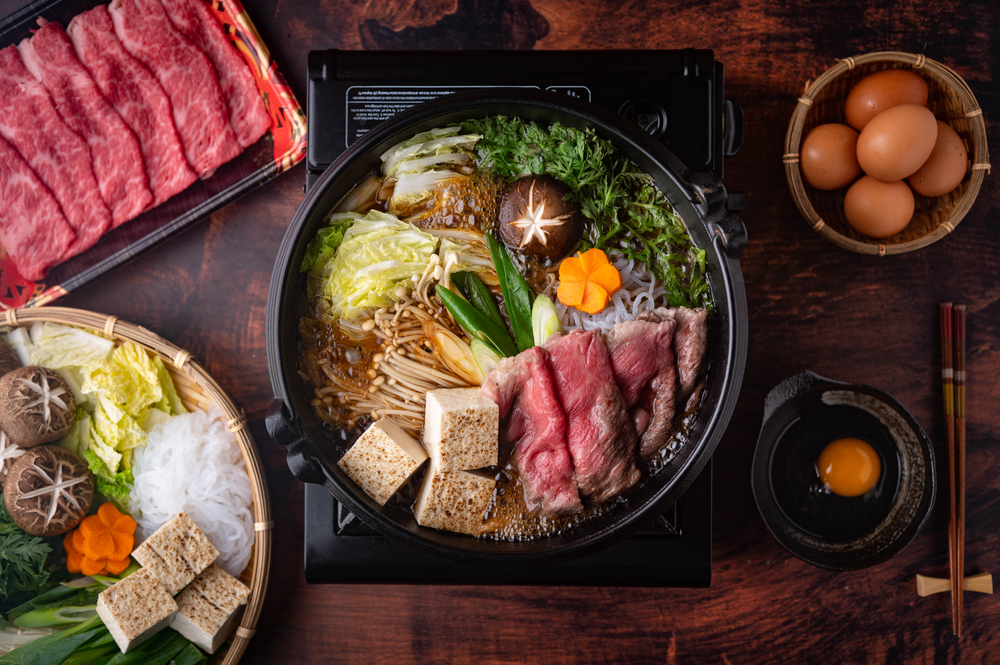 Sukiyaki is best shared, simmering away in the center of the table as diners huddle around to grab bites between warm conversation. (Atsushi Hirao/Shutterstock)
Food

Ward off winter's chill with a bubbling hot pot of beef and vegetables in a sweet and savory broth
BY Melissa Uchiyama TIMEJanuary 27, 2022 PRINT

Winters in Japan mean congregating around heat. We camp out under kotatsu, Japanese heated tables, and share all kinds of nabemono, hot one-pot dishes such as shabu-shabu, oden, or sukiyaki. Combining a medley of ingredients in a simmering broth, these Japanese hot pots are cooked at the table, to be enjoyed as a communal feast.

Sukiyaki, in particular, is seasonal party food—a staple on New Year’s tables, and all through the rest of winter.

The dish is traditionally prepared in a wide cast-iron pan, which keeps the contents bubbling hot. It begins with a shallow layer of warishita sauce, a sweet and savory blend of soy sauce, sake, and sugar, thinned with a splash of kombu dashi, an umami-rich kelp broth.

Into this fragrant, simmering base go paper-thin strips of richly marbled beef, followed by grilled tofu, noodles, mushrooms, and the best of winter’s vegetables: nutrient-rich shungiku (chrysanthemum greens) and negi (long, thin Japanese leeks). The host may choose to portion out servings as they cook, or casual diners may reach into the pot themselves to fish out their favorites.

In a distinction from shabu-shabu, sukiyaki calls for raw egg to be used at the end as a dipping sauce. Every bite is eaten hot, so the egg instantly clings to the beef to become part of the sauce, transforming both.

Sukiyaki’s origins and rise in popularity are tightly tied to the Westernization of Japan.

For 1,200 years of the country’s history, eating meat was taboo—in part due to the influence of Buddhist principles, after Buddhism’s arrival from Korea in the sixth century, and in part due to limited land for raising livestock. A series of emperor-decreed bans protected various animals from being consumed. Beef was allowed in special instances, such as for ceremonies or when used as medicine, but in most cases was widely forbidden.

The popularity of this beef-centric dish thus mirrored one of the most significant turning points in Japanese culture—including its cuisine.

In the late 19th century, when Japan opened up to foreign trade after two centuries of isolation, Western ideals—and meals—entered the country, too. The Meiji government began to push Japan toward Westernization, including promoting the notion of eating meat, part of a Western diet, as a way to fortify the Japanese people and nation.

Shaking the taboo wasn’t an easy process. But it helped when in 1872, the emperor publicly declared that he had eaten beef for the New Year, and encouraged his people to eat meat. As beef grew in popularity and availability, it eventually evolved from a special occasion dish to one restricted to the elite, to finally part of an everyday meal.

At the time, to eat beef in Tokyo and the surrounding Kanto region was to eat a hot pot dish called gyunabe, a forerunner to sukiyaki featuring beef and green onion. People dining in gyunabe restaurants were considered cosmopolitan, able to do business and have relationships with the foreign merchants and traders docking in the ports. Shops and restaurants preparing the dish proliferated.

In 1922, a catastrophe rocked the very core of Japanese life. The Great Kanto earthquake and the extensive resulting fires claimed the lives of hundreds of thousands of people. Survivors were sent as far as Kobe in the southern Kansai region, across the country, while people from Kansai went north to Kanto to aid in rebuilding. In this exchange, people from both regions began to discover both their similarities and differences—including that Kansai had been making a dish similar to gyunabe, called by a different name: sukiyaki.

Gyunabe restaurants in Kanto closed in the wake of the earthquake and fires, but Kansai sukiyaki restaurant owners came in and set up shop, bringing their add-ins of grilled tofu, mushrooms, and other greens, and their dipping sauce of raw egg. The name “sukiyaki” stuck.

Kansai-style sukiyaki calls for searing the fatty beef in the pan first, then adding the warishita sauce, while the Kanto way instead adds the meat to a pan already containing a fragrant, shallow simmer of sauce.

“Either way, the taste comes out to be the same,” says Akira Fujimori, the fifth-generation owner of Imaasa, a 135-year-old traditional sukiyaki restaurant in Shimbashi, Tokyo. When I visited the restaurant with a friend, my translator, Fujimori greeted us bedecked with a pocket watch tucked in the vest of his three-piece suit and a European-style handlebar mustache. We were in for a historic meal.

According to Fujimori, when the steam locomotive was built to carry people from the port of Yokohama to Tokyo, this was the stop.

“Sukiyaki was the first and last meal served aboard ships traveling to and from Japan,” he added. That would explain why I kept spotting the dish in historical documents—printed in retro cookbooks and on ship menus in the 1930s. One cookbook author referred to sukiyaki as “the friendship dish.”

Fujimori showed us to the restaurant’s museum-like case of cast-iron sukiyaki pans, each one seeing Tokyo through a period of history. The first iron pot dated to 1880; stainless steel pots appeared when iron wasn’t available during World War II. The restaurant has stood through both dramatic growth and tremendous upheaval.

Fujimori shared the recipe that has worked for five generations. It starts with a warishita sauce made with equal parts sake, sugar, and soy sauce. A separate small vessel of kombu dashi is kept on hand, to thin the sauce as it thickens and reduces in the pot, adding a dimension of umami and cutting sweetness.

Then there is a dramatic, table-side show of cooking fresh, seasonal ingredients with elegance. Imaasa uses A5 Matsuzaka beef, cut into paper-thin slices and placed into the pot just so by professional servers called nakai. “There is no higher-ranking Matsuzaka beef. You can tell, as no matter how much you eat, you feel light and healthy, not heavy or ill from oil or fat,” he said.

It’s true—even after a full-course dinner, including a large platter of deeply flavorful sukiyaki, my guest and I are comfortably satiated, not overly stuffed. Outside, the gingko leaves are so yellow against the blue Tokyo sky. I imagine similar feelings from diners also leaving their sukiyaki lunches 130 years ago, bolstered against the winter’s cold, perhaps ready to ring in the New Year.

Correction: A previous version of this article misspelled the name of Akira Fujimori. The Epoch Times regrets the error.

Melissa Uchiyama
Follow
Melissa Uchiyama is a food writer, essayist, and teacher who leads creative writing camps in Tokyo. You can find Melissa at EatenJapan.com and on Instagram @melissauchiyamawrites.
SHARE
Friends Read FreeCopyFacebookTweet
You May Also Like