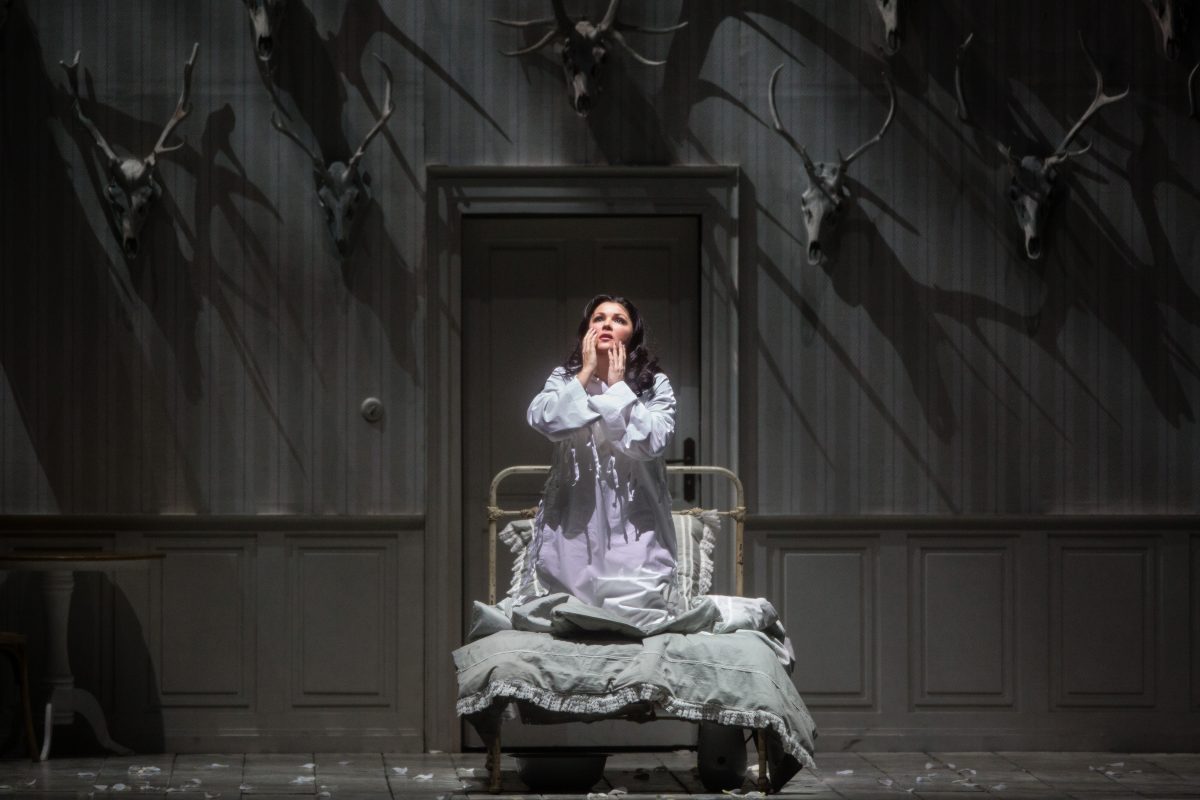 One Is Blind and the Other Sees Too Much

The heroines of "Iolanta" and "Bluebeard's Castle" at the Met
BY Barry Bassis TIMEFebruary 9, 2015 PRINT

NEW YORK—The Metropolitan Opera has a new production, pairing Tchaikovsky’s “Iolanta” with Bartok’s “Bluebeard’s Castle.” A co-production with the Polish National Opera, directed by Mariusz Trelinski, the two pieces are linked visually and benefit from starring two of the most dynamic singers on the international scene, Anna Netrebko in the Tchaikovsky opera and Nadja Michael in the Bartok, as well as Valery Gergiev leading the Met’s superb orchestra.

“Iolanta” was first presented in St. Petersburg in 1892 as the opening piece on a double bill with “The Nutcracker.” The ballet has become a seasonal favorite but the opera is not well known outside of Russia. The new production marks its debut at the Met. This oversight is surprising since the opera is melodic and moving, especially with this cast.

The title character is a young blind woman, who is the daughter of King René. He has her living in seclusion, cared for by a rustic couple, and unaware of her disability. She thinks eyes are only for crying. In fact, Iolanta’s blindness is a state secret and even Duke Robert, to whom she has been promised in marriage, has no idea of her condition. He happens to be in love with another woman and would like to extricate himself from an engagement made while he was a child.

By chance, Robert and his friend Vaudémont turn up at Iolanta’s house. The two men have no idea of her identity. Robert leaves, but Vaudémont immediately falls in love with her. He doesn’t realize she is blind until he asks her to hand him a red rose, and she repeatedly hands him a white one.

King René arrives and is furious that Vaudémont has told Iolanta of her condition. A Moorish doctor has been brought in to treat the girl, and he opines that she can’t be cured until she desires to see.

The King orders that Vaudémont be executed if the doctor fails. This provides Iolanta with a need to be cured, and the treatment is successful. René consents to Iolanta’s marriage to Vaudémont.

Netrebko sings beautifully and captures all the character’s mood swings. As Vaudémont, Piotr Beczala confirms that he is one of the finest tenors around. Baritone Aleksei Markov makes a strong impression as Duke Robert. At the performance I attended, Ilya Bannik substituted for the ailing Alexei Tanovitski in the role of King René and maintained the high standards, as did Elchin Azizov as Ibn-Hakia, the Moorish doctor.

“Bluebeard’s Castle,” Bartok’s only opera, is based on Charles Perrault’s 17th century fairy tale. The two-character piece involves a young woman, Judith, who has just married the sinister Bluebeard. She demands the keys to the closets in his castle. There is blood everywhere, and she ultimately discovers his previous wives, whom she seems destined to join.

Nadja Michael gives an extraordinary performance as the lovelorn and fearful Judith, and bass Mikhail Petrenko is a convincing heavy.

The program notes state that the Met’s new production of the two one-act operas is “visually inspired by film noirs of the 1940s” and the director has specified Alfred Hitchcock’s 1940 “Rebecca” as a key influence.

This moody approach is achieved by director Trelinski and his team of set designer Boris Kudlicka, costume designer Marek Adamski, and video projection designer Bartek Macias. Their work is more successful in “Bluebeard’s Castle,” a modernist opera with a sort of “Rebecca” story. That movie (and the du Maurier novel on which it was based) deals with a newlywed woman who is trying to find out what happened to her husband’s first wife.

In the Bartok opera, there is a group of mysteriously “disappeared” prior wives. The ending, as Judith makes her discovery, is chilling. A bathtub scene with the stunning blonde leading lady made me wonder whether Bluebeard’s castle would turn into the Bates motel.

By contrast, Iolanta is a more traditional fairy tale with melodic music and a happy conclusion. It seems unlikely that the king would banish his beloved daughter to the bare and spooky abode presented here.

Nevertheless, the double bill is one that opera lovers will not want to miss.