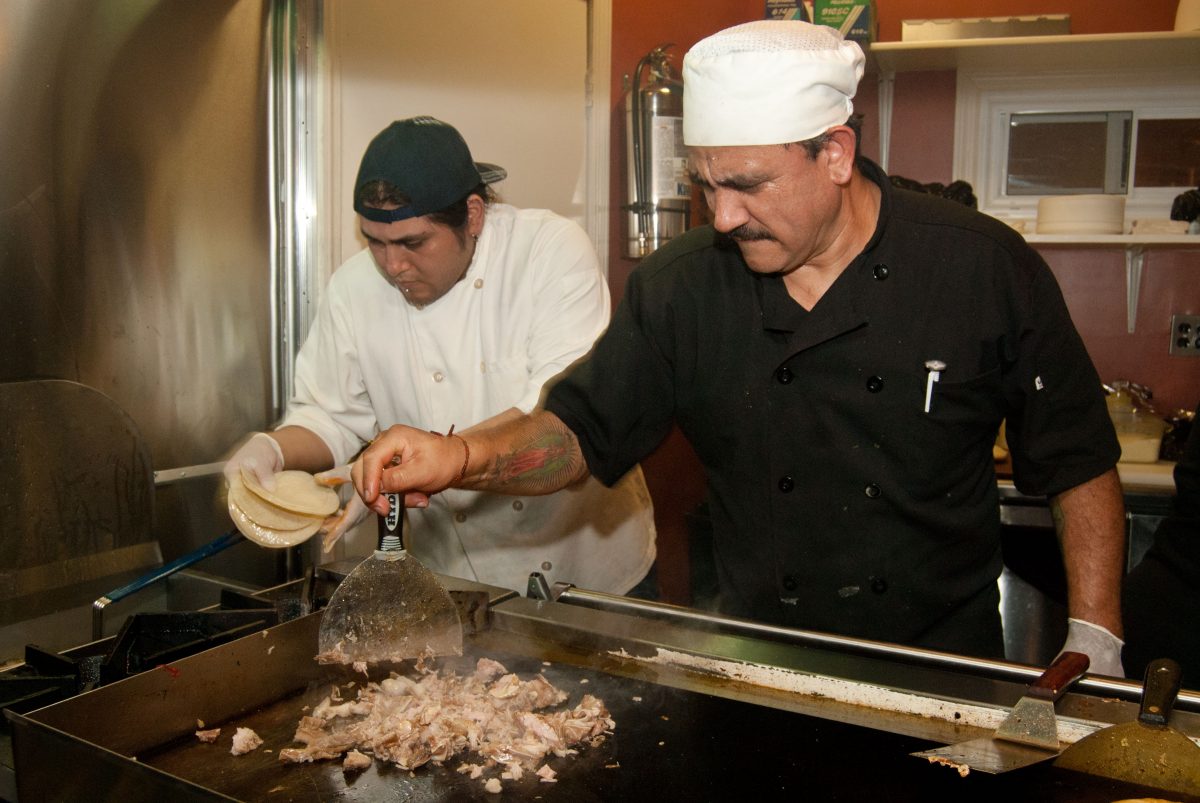 On the Trail of Central and South America, in Queens

The subway buzzed overhead. It was late, and a little group of seven huddled around the food cart.

The vendor handed us two little packages, one wrapped in cornhusk, the other in a plantain leaf. The tamale with cheese was possibly the best I’d ever eaten: the corn masa that enveloped the cheese filling was unusually silky and moist. It only occurred to me a little later that it was probably due to a good helping of lard.

The other tamale carried the scent of the plantain leaf, tropical and warm. These looked like tamales, tasted like tamales, but were really little portals: they transported me from a dark, cold, and wet street corner, to a sunny street somewhere in Mexico.

I was on a quest to find some of the best Mexican street food in New York City. Naturally, I headed straight to Jackson Heights and Corona, Queens.

I have a friend from Jackson Heights who once told me of his vacation to Mexico City. He sampled tortas all over the city, and he said none of them were as good as they were at home, in Jackson Heights.

A large population of Mexican immigrants live there, along with immigrants from Central and South America.

Everywhere soccer matches are being shown on screens in restaurants; signs are in Spanish; shops are selling phone cards and transfers of cash back home. Family tradition is strong: aside from commuters coming and going, you see mothers and children, clusters of two, three, four, and more carrying out errands. And every few feet it seems, food and drink that reminds one of Central or South America.

Vendors are often out in full force after sunset and often all night, to serve workers who finish their shift closer to midnight than 6 p.m., such as those working in restaurants.

I tagged along one evening with Jeff Orlick, who is a resident of Jackson Heights and loves to share his love of the neighborhood and its food by leading tours.

He is such an old hand at this that he has his own telltale signs for what makes a food cart great. We stood by a cart named El Coyote Dormilon, right underneath the 7 train track, on Roosevelt Avenue and about 92nd Street.

He pointed at the cooks’ feet. There were wooden boards underneath, which made the cooks stand higher. The path of causation (and even correlation) is mysterious, but Orlick said, in his experience, 100 percent of the time, the presence of these boards indicated good food.

The proof came in the quesadillas. The cooks pressed out their own dough for the tortilla, and topped it with mushrooms, flor de calabaza (squash flowers), and cheese. It was delicious—no wonder people lined up for it.

The coffee, or cafe de olla, included a dash of cinnamon, giving the coffee an exquisite, fragrant touch.

Ninety percent of the Mexican food along this strip of Roosevelt Avenue was from Puebla, said Orlick.

One of our stops was Juan Bar, on the northeast corner of Junction Boulevard and Roosevelt Avenue, the temporary home (as of last week) of the friendly Galdino Molinero, better known as “Tortas,” even to his young son.

His sandwiches, or tortas, are indeed known far and wide in the area; he has also been a Vendy finalist. Orlick likens him to a sushi chef. You can tell him what you want or let him decide what to make, you chat and watch him at work. In no time he has your food ready. He doesn’t skimp on anything. I went back a different time and ordered a torta from him that was bulging with steak, cheese, and lettuce, and spilling all over the sides. It was food that happily induced sleep.

You can find Tortas there for the next couple of months until he sorts out the permit for his food truck.

We made several other stops, to try bollo de pescado (fish balls cooked with cornmeal) from an Ecuadorian truck (with a huge screen TV); excellent patacón (a sandwich made of green plantains rather than bread, with a meat filling) from a Dominican truck, and so on. It was nearly midnight by the time we crawled up the subway steps on our respective ways home.

Orlick was once asked how many calories his food tour consists of. He was taken aback but ventured a guess, maybe 800? My hopeful guess: net zero—with so much walking, surely street food becomes calorie-neutral. Okay, maybe not.

It’s not the lightest food, although on a tour, you mercifully just take bites here and there. And being street food, it’s not the prettiest or fanciest either. But is it good? It’s excellent, the best thing next to traveling to Mexico or Ecuador.