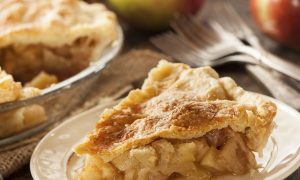 On Rosh Hashanah, Honeyed Desserts for a Sweet New Year

On Rosh Hashanah, “sweetness is paramount,” writes Jewish food authority Leah Koenig in her cookbook, “Little Book of Jewish Sweets.” The festive meals of the Jewish New Year, which this year begins at sundown on Sunday, Sept. 29 and ends at sundown on Tuesday, Oct. 1, are full of food symbolism. Sweet foods, a common theme, are meant to usher in a sweet new year.

The meal on the first night traditionally begins with slices of apple dipped in honey, with the roundness of the fruit and the sweetness of both embodying wishes for a full and sweet year to come, Koenig explained.

Challah is another staple, studded with raisins for sweetness and wound into a spiral for roundness and fullness, and often also dipped in honey to eat. (Koenig, an Ashkenazi Jew, grew up dipping pieces into her chicken soup instead: “a combination that sounds a bit incongruous but was the stuff of miracles,” she said.)

Ashkenazi Jews also eat apple cakes (apfelkuchen) and honey cakes (lekach), “baking the apple and honey tradition directly into dessert,” Koenig said. In “Little Book of Jewish Sweets,” she combines the two into a handsome, best-of-both-worlds honey-apple cake, sweetened with honey, perfumed with warm spices and coffee, and cut through with a layer of tender, cinnamon-spiced apples. The “apple half” of the cake is based on her mother’s recipe.

The book also has a recipe for teiglach, a traditional Ashkenazi treat made from balls of baked dough doused in honey syrup. The dessert has “ancient roots to some of the earliest rudimentary desserts that boiled nuggets of dough in honey,” Koenig said, but today is often dismissed as old-fashioned and unappealing—no thanks to modern Jewish bakery renditions that tend to be “overly saccharine and regrettably dry.” To revive the classic, Koenig pierces through the monotone sweetness with bright lemon zest and crystallized ginger.

The symbolism goes beyond sweetness, too: tradition also dictates eating seedy pomegranates, for instance, representing a desire for a year of abundance and plentiful good deeds; and introducing a “new fruit,” one that hasn’t been had all year, to be eaten after a blessing giving thanks for entering the new season. Sephardi and Mizrahi Jews, meanwhile, traditionally partake in an elaborate seder of symbolic foods, each one preceded by a blessing and representing a different intention, often derived from a pun on its name.

Here, Koenig shares her recipes for honey-apple cake, teiglach, and baklava—guarantees for a sweet and delicious year ahead.