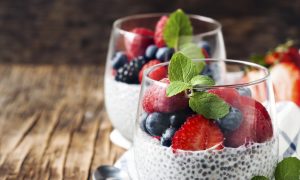 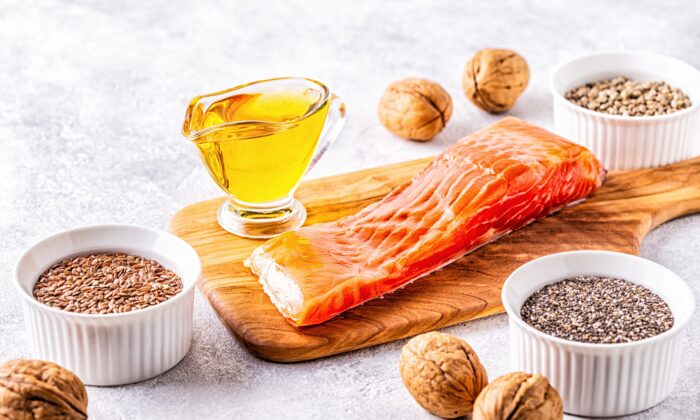 Omega-3s are essential to a healthy brain and body. (Tatiana Bralnina/Shutterstock)
Mind & Body

A recent study published in The American Journal of Clinical Nutrition spanning 11 years and more than 2,000 participants yielded a startling finding: When comparing omega-3 index to conventional cardiovascular risk factors in older adults, it shows that having a low blood omega-3 index is as strong a predictor of mortality as smoking.

The average age of the participants at the beginning of the study was 65. Their blood fatty acids were measured, and they were followed for 11 years. There were 2,240 participants and 384 deaths over that time.

The omega-3 index is a measurement of the two types of omega-3s—eicosapentaenoic acid (EPA) and docosahexaenoic acid (DHA)—as a percentage of the total fatty acids in red blood cell membranes.  The higher the index, the more omega-3 there is in a person’s blood.

Using mathematical modeling, the researchers estimated that the participants who were in the highest fifth of the omega-3 index at age 65 gained 4.74 years of life compared to those in the lowest fifth. This was similar to the difference between smokers and non-smokers at age 65, where the smokers lost 4.73 years of life, according to the model.

The study, “Using an erythrocyte fatty acid fingerprint to predict risk of all-cause mortality: the Framingham Offspring Cohort,” was published in June.

This research comes a few months after a meta-analysis of 17 prospective cohort studies was published in Nature Communications. The analysis linked higher circulating omega-3 fatty acid levels to longevity. In a pooled analysis of the studies, participants in the highest fifth of combined blood DHA and EPA were 15 to 18 percent less likely to die from any cause over the follow-up period (median follow-up time is 16 years in these studies). Higher blood omega-3s were also associated with a reduced risk for death from cardiovascular disease and cancer.

The Importance of DHA and EPA

DHA and EPA are important structural and functional components of brain and retinal cell membranes. They also have triglyceride-lowering, anti-inflammatory, anti-platelet, and anti-hypertensive properties, plus beneficial effects on cell membranes that may also contribute to better health and a longer life.

Previous studies have linked a low omega-3 index (below approximately 5 percent) with an increased risk of cognitive decline in older adults. All the above studies corroborate the prior studies linking a low omega index to brain shrinkage and cognitive impairment, and they reinforce how critical it is to properly address this issue.

DHA and EPA supplementation is important for anyone who doesn’t eat fatty fish frequently. These appear to be more crucial forms of omega-3s compared to the plant-based omega-3—alpha-linolenic acid (ALA).

Omega-3 index is low in vegans—approximately 4 percent when measured in studies—and the research suggests that adding ALA from flax seeds and walnuts doesn’t significantly raise the omega-3 index in most people. Most of the ALA in our diet is burned for energy, not converted to EPA and DHA. Consuming pre-formed DHA and EPA is the most reliable way to increase omega-3 levels in the blood.

I recommend checking the omega-3 index with a blood test if you have a concern that your levels are low. A good way vegans and others can make sure to get enough DHA and EPA is by taking an algae-based supplement (refrigerated if possible).

Joel Fuhrman, M.D., is a board-certified family physician, best-selling author, and nutritional researcher specializing in preventing and reversing disease through nutritional and natural methods. This article was originally published on DrFuhrman.com.