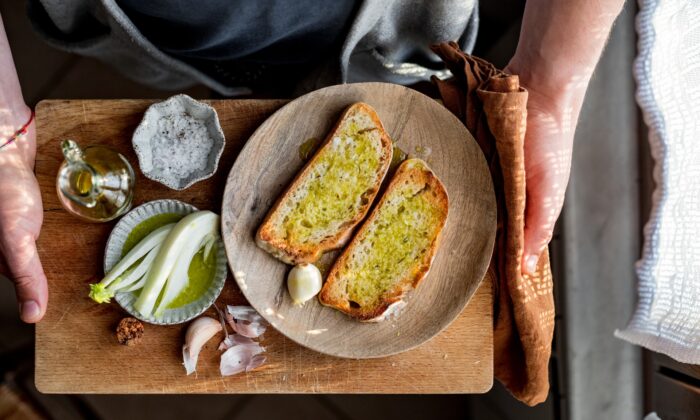 Tuscans know that the best ways to enjoy olio nuovo are some of the simplest: doused on a toasted, garlic-rubbed slice of bread, or used to dip crisp winter vegetables. (Giulia Scarpaleggia)
Food & Dining

Olio Nuovo: How to Savor the Season’s Freshest, Most Prized Olive Oil

This saying pretty much sums up the Italian philosophy on these two culinary elixirs. If wine, properly stored, as a general rule is better the older it gets, with olive oil, the opposite is true.

As time goes by, even in a matter of months, the aromas slowly fade, the flavors flatten out, and the health benefits diminish. This explains why here in Italy, we all get excited when the season of olio nuovo, the first, freshly pressed olive oil, finally arrives.

November might be considered a gloomy month—the days are getting shorter, rain and mist are a constant companion. But it’s also a month brimming with traditions and reasons to celebrate.

On Saint Martin’s Day, on Nov. 11, the new wine, known as vino novello, flows abundantly, making everyone a little tipsy. This is an easy-drinking, low-tannin wine with bright, lively color and a young, fresh flavor that marries beautifully with roasted chestnuts, another seasonal treat.

Then there’s the olio nuovo. Throughout Italy, olives are typically harvested from October through December, depending on the region, the climate, and the weather. November, though, is often the preferred month.

As soon as the olives are picked, they’re brought to a local frantoio, or olive oil mill, and carefully guarded until ready to press. What comes out of the millstone is the pure essence of the olives: their fresh, raw, unfiltered juice, a bold and brilliant elixir brimming with grassy, peppery, pungent notes that everyone goes crazy for.

How to Recognize Olio Nuovo

If you are not so lucky as to have an olive grove—or neighbors and friends that are happy to share their freshly pressed oil—here are a few tips for recognizing olio nuovo.

Look at the harvest date on the back label of the bottle: It should be late in the most recent year, from October to December. The shelf life is usually 18 months, but you can really only call it olio nuovo for about 3 months from harvest, as this is when it retains that mix of bitterness, pungency, and fruitiness that you expect from a freshly pressed olive oil.

The oil will be cloudy, as it is unfiltered. The color, however, does not signify quality, as it can range from green to yellow, depending on the type of olives used. In Italy alone, there are more than 300 different kinds of olive trees.

Olio nuovo—and any extra virgin olive oil—is not meant to be saved for special occasions. Use it daily, and freely, and store it correctly: in a dark bottle in a cool, dark cupboard, never next to your stove.

As soon as you are handed your olio nuovo, run home to toast some bread. Quickly rub it with garlic and douse it in olive oil: this is the best way to appreciate the precious gift you have just been given by Mother Nature. This is what they call fettunta in Florence, meaning “greased slice of bread.” It’s uncomplicated, straightforward, and highly effective: the hot toasted bread immediately opens up the oil’s aromatic bouquet of peppery, grassy, bitter notes in all their glory.

A pinzimonio, pairing the oil with a bowl of crisp winter vegetables for dipping, is equally satisfying. Carefully wash a selection of fennel, carrots, celery hearts, and fresh onions, and leave the olive oil in its purest form. Forget the vinegar; the only concession allowed is a pinch of salt.

There are also regional habits, depending on each region’s availability of local products and the distinct taste and aroma of their olio nuovo. In Puglia, it’s a perfect match with the ubiquitous broccoli rabe; in Abruzzo, it goes into spaghetti aglio, olio, e peperoncino, with a sprinkling of the local dried sweet peppers for extra flavor. In Umbria, it’s drizzled on a local soup, hearty with pulses and grains.

Although I’m an advocate of cooking—and baking, and even frying—with extra virgin olive oil, when it comes to olio nuovo, I prefer to enjoy it raw, so as not to lose its intense, piquant notes. I use it as a seasoning, drizzling it over soups, salads, or hearty crostoni.

My favorite ways include a winter crostone with Tuscan kale and a spoonful of cannellini beans; an autumn panzanella salad with warm seasonal vegetables; and an unassuming soup with potatoes and Savoy cabbage, brightened up by a power duo of toasted black pepper and olio nuovo.

So, should you be so lucky as to find some olio nuovo, here are three seasonal recipes to appreciate this once-a-year harvest treat, the Tuscan way.

Giulia Scarpaleggia
Follow
Giulia Scarpaleggia is a Tuscan-born and bred food writer, food photographer, and author of five cookbooks, including “From the Markets of Tuscany.” She is currently working on her sixth cookbook. Find her online at her blog, JulsKitchen.com