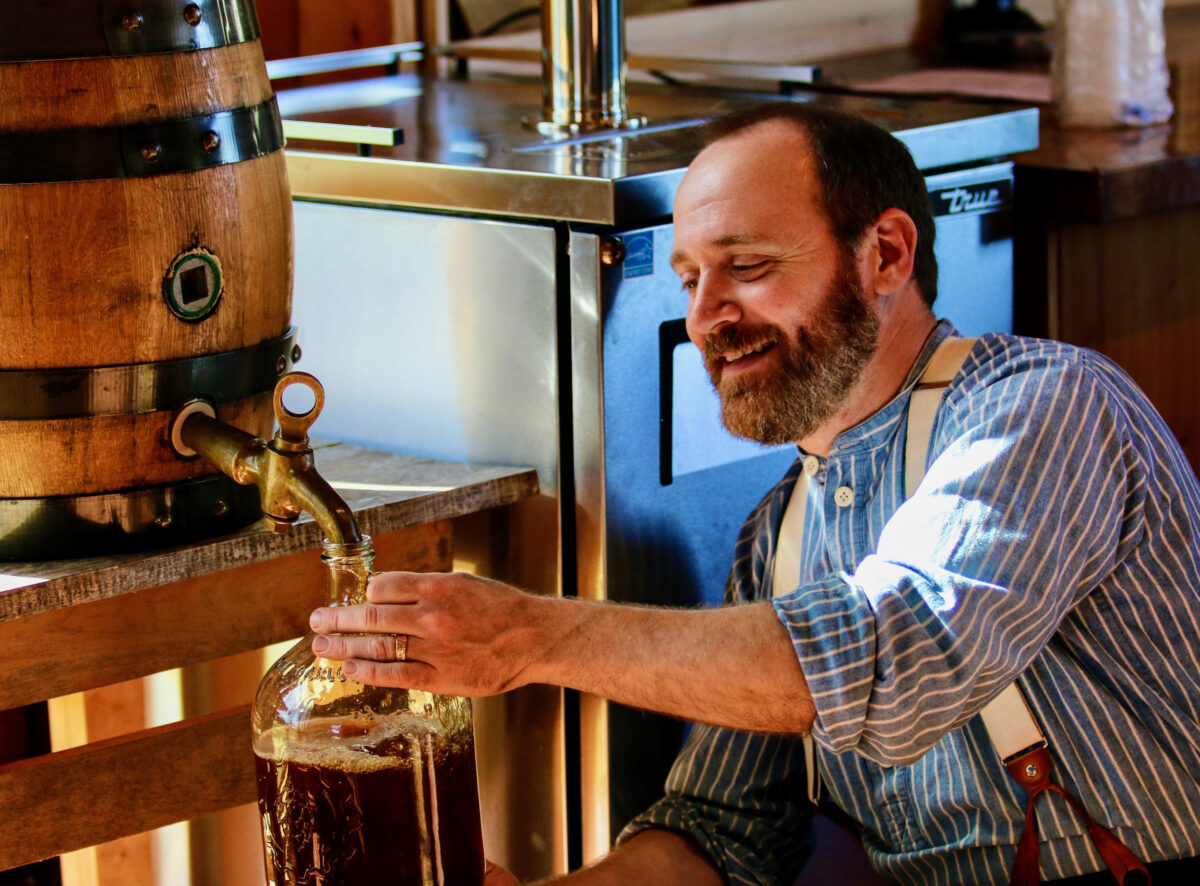 Old World Wisconsin Gets a Brewhouse

This is news that doesn’t feel new: “Breaking story: Wisconsin museum brews beer and gives out samples.” Afterwards, you can see a tavern that dates back over a century. It’s like announcing Wisconsin makes cheese. But trust me: this is awesome.

While I’ve sipped beer in a museum before, it wasn’t beer being brewed in a live exhibit right in front of me. This is not your ordinary museum, and the new brewhouse exhibit represents not just an important element of history, but changes in how visitors experience it.

Old World Wisconsin sprawls across 600-plus acres of rolling hills covered in forest and fields, the largest outdoor museum of rural life in the United States. More than 60 historic structures, primarily from the 19th century, have been brought from throughout the state to be reassembled here. Docents dress up in period clothing and remain in character as they describe life in the various immigrant and pioneer communities in Wisconsin in the 19th century.

Director Dan Freas says, “When I first came to OWW in 2012, one of the first questions I asked was, ‘Given the importance of beer and brewing both as an industry and part of our culture in Wisconsin, why are we not telling that story here?’” The original 1960s vision for Old World Wisconsin did in fact call for a brewery and tavern, but when the museum opened in 1976, for various reasons, that didn’t happen—until now.

The new brewhouse made its public debut on June 18, 2022, but unlike the other structures, this is not a historical building nor even designed to represent a particular time period. Barn-like with beautiful wood rafters, three cupolas for ventilation, and the region’s popular Cream City brick for its double fireplace and chimneys, the brewhouse reflects Wisconsin but in a timeless way.

Brewer Rob Novak walks us through the process, from grinding grain by hand to stirring up a kettle boiling over a wood fire. Novak grew up in Eau Claire, Wisconsin, and studied theater and playwriting in California, where he got into homebrewing. Returning to Wisconsin he helped set up a local craft beer bar and worked for several breweries before making the move to Old World Wisconsin in 2022.

This is on the level of a farm brewery, making small batches for family and perhaps selling to neighbors, as opposed to the later production breweries, often founded by German immigrants, that gradually grew to distribute at greater distances as did beer barons such as Miller, Pabst, and Schlitz.

Novak pours a measure of hop cones—not the pelletized version—into the brew kettle and stirs them in with a paddle. Later he pours the hot wort through a filter to remove the hops and into a koelschip (coolship), a shallow, copper tray used to cool the liquid before adding yeast for fermentation in wooden half-barrel vats. The vats are covered with clear plastic lids so visitors can see the yeast foaming inside.

“We don’t have temperature control over fermentation, which is a brewery’s first order of business,” says Novak. He shows us copper cylinders, old-school German tools that can be set inside the fermenting batch and filled with cool water to bring down the temperature when it gets too hot. Secondary fermentation in the cask eats up the remaining sugars and carbonates the final product. It’s a six-hour brewing process and fermentation lasts three weeks. So a monitor plays a four-minute video for visitors not arriving during a brewing process or only able to see one part of it. A touchscreen interactive map shows where the breweries were in the state.

Novak serves a round of chilled samples from a previous batch—3 ounces or less in accordance with state law.

“Immigrants came to Wisconsin and brewed with what they had. They were growing their own barley. Belgians or French may have used wild yeast. Ale yeast was here, lager yeast came from Germany.” Golding hops along with four other varieties, are grown right on-site on one of the park’s farms and more hops will be grown in front of the brewhouse eventually as well. Some of the beers take corn, an additive truly American that mimics a light lager, something the Germans would have liked. Some beers, such as Norwegian styles may be brewed with juniper or spruce rather than hops.

Steps from the back of the brewhouse is an old tavern in the process of being restored. A 1929 Ford AA, a typical delivery truck that would deliver beer to rural taverns, is parked out front.

Frank and Fanny Wittnebel opened a tavern in 1906 in Old Ashippun about 26 miles north of Old World Wisconsin. When it closed in the 1980s, everything was left intact for decades. Like “the archaeologists walking into King Tut’s tomb for the first time. It really did give you a sense that you had stepped back in time,” says Freas.

The owners added restrooms after Prohibition, and these are an important part of the story: Prior to Prohibition, taverns were more of a male experience, so patrons would “just step out back,” so to speak. But tavern life became more family-friendly thereafter. “As far as I know, Old World Wisconsin will be the first history museum in the country to have 1930s restrooms as part of our exhibits.”

Findorf, a construction company, helped move the old building down the highway in large sections to its new home. Old photos and paint analysis will inform restoration, and local craftspeople are recreating original tables and the wood porch. The tavern should be open for the 2023 season as will a biergarten out back.

The 1930s tavern is “moving closer to modern memory,” says Freas. This will be a working bar, rather than building a modern taproom. A partner brewery will help develop a 1930s recipe of a post-Prohibition beer brewed in a modern facility. To be served to patrons in reproduction glass mugs which can be kept as a souvenirs. An old-style crank-and-receiver wall phone will ring with messages in character and a radio on the back bar playing period music or a ballgame (Maybe the Cubs vs. Cardinals? No Braves or Brewers back then!)

Having the brewhouse front and center at the entrance rather than down in the village area “allows us to tell that educational story, but it also then allows us to use these spaces for after-hours private events,” says Freas.

Area brewers are excited about opportunities to participate in the exhibit and to get involved with such special events and beer dinners.

And in the bigger picture, Old World Wisconsin is changing the museum experience. “We wanted to use this as an opportunity to begin to tell stories in a different way,” says Freas.

Staff in period clothing continue to demonstrate historical processes, but the goal is to take the spectator experience to a participation experience. The Catch Wheel Fever exhibit, which explores the bicycle craze in Wisconsin, allows patrons to climb up on a stationary high-wheel bike or pedal around on some replica tricycles. While the blacksmith still demonstrates the craft, in the future hands-on lessons or classes may be available. “We have done cheese-making on a very small scale in the past. That is one of those iconic stories as part of Wisconsin,” says Freas. And now we can add brewing and beer culture to that list.