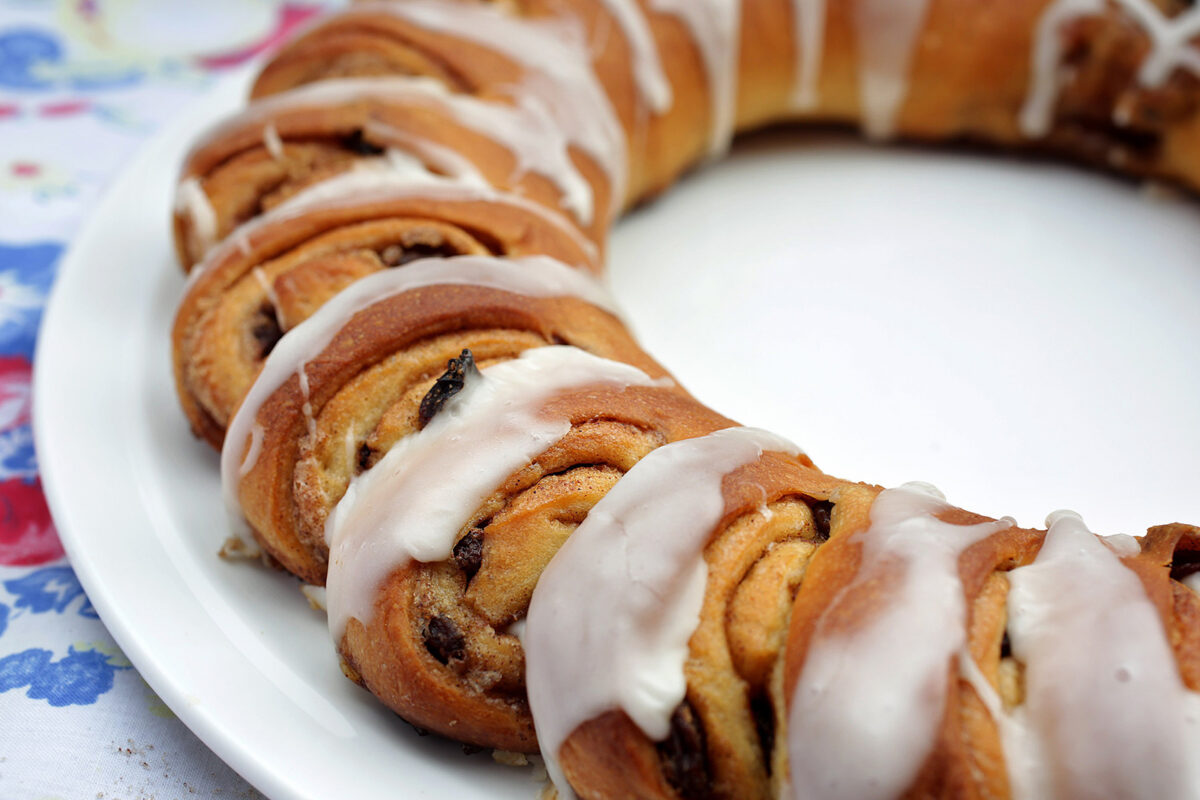 Old-Fashioned Baked Goods: 4 Recipes That Should Have Never Gone Out of Style

Far away on a distant sea lies the Island of Old-Fashioned Baked Goods.

But despite the appearances, all is not happy on the island. The pleasant, hopeful veneer hides an undercurrent of sorrow.

These baked goods were once beloved. They were in every magazine, they were on everyone’s tongue. But now they are all but forgotten.

Does that diminish their inherent quality? Does that make them any less worthy of being eaten?

Does that make them … stale?

I say no. I say it is time for these brave and stalwart baked goods of yore to make a stand, to leave the peaceable comforts of their isle, and to find their way back to our tables—for the sake of nostalgia, if nothing else.

I began with butterhorn rolls, which I always knew as crescent rolls (the names are, apparently, interchangeable). These were a favorite of mine when I was growing up, and I looked forward to dinners at my grandmother’s house when she would serve them.

It’s possible we only had them at Thanksgiving, but they have loomed large in my memory because they were so buttery and flaky and delicious.

But I also haven’t had them since my childhood, and I haven’t seen them anywhere, either. Those store-bought refrigerated rolls that pop out of their container do not count. They do not count at all.

The homemade version is vastly superior. And it’s not because of the yeast that makes them rise so beautifully, nor the eggs and the milk that make them so rich. It’s not even the modest amount of sugar, that brings just a hint of sweetness.

It’s the butter in the butterhorns that makes them so addictive, a half-tablespoon of it in every roll.

Hillary Levin, the photographer who takes the pictures of most of my food that graces these pages, called it one of her favorite breads that I have ever made.

For my next baked good, I went to a cookbook that was published in 1940. My wife’s aunt bought “The American Woman’s Cook Book” that year, and I’d like to think she used it to make a lemon chiffon pie.

If she didn’t, she should have.

I, for one, had forgotten all about lemon chiffon pies until I saw the recipe. And then the memories came flooding back: the sweet, delicate tartness of the filling, so impossibly light, on a simple crust, with a dollop of whipped cream on top for an additional little taste of sin.

It took a few steps to make, but that is largely because I made my own crust (old-fashioned desserts deserve homemade crusts) and I whipped my own egg whites and my own cream (I don’t have an epigram for that, I just like whipping egg whites and cream).

The result was magnificent. It was lemony and chiffony and delightful.

My wife said it had the taste and the texture of the ’50s.

Next, I made doughnuts. You could argue that there is nothing old-fashioned about doughnuts, but I would present the counterargument that these were homemade. When is the last time you had homemade doughnuts? And why didn’t you invite me?

Besides, these are called Gram’s Doughnuts, which automatically makes them old-fashioned.

In fact, the recipe dates back to the Depression, when one of the cookbook’s author’s grandmother would invite local workers inside for coffee and all the doughnuts they wanted for 10 cents.

That was a deal, even in those pre-inflationary times, because the doughnuts are amazing.

It’s not just that they were doughnuts and are therefore praiseworthy, although that fact is indisputably true. These doughnuts are special because they are lightly spiced with ginger and nutmeg and then rolled in cinnamon sugar.

And yes, they tasted as good as that sounds.

Even so, they weren’t my favorite of the old-fashioned baked goods that I made. That honor went to the Swedish tea ring, which enjoyed a few decades of popularity around the middle of the last century.

At its heart, it is a sweet bread with cinnamon and raisins in it. But it is so much more than that.

For one, you roll the dough out flat and then smear the top of it with butter. It is almost as if you are going to laminate it and turn it into puff pastry, but instead you roll it up like a jelly roll. Before doing that, though, you sprinkle it with a generous mixture of raisins and brown sugar.

The brown sugar is unexpected but important because it brings an earthy hint of molasses to the dish.

Once it is rolled up, you join the ends together to form a circle. And then, to give it the distinctive look of a Swedish tea ring, you slice deeply into it every inch or so and fan out the pieces before it cooks. That makes it a pull-apart treat sort of like monkey bread, if monkey bread were in the shape of a ring.

I topped it with a simple glaze made from powdered sugar, milk, and vanilla, which added just the right touch of sweetness.

But it did more than that, too. I had leftover glaze, so I dunked a couple of my homemade doughnut holes in it.

You can’t imagine how good that was. Those old-fashioned folks knew what they were doing.

1. Lightly grease a large bowl with cooking spray and set aside. In a different large bowl, mix together 4 1/2 cups flour, the yeast, and salt. Melt 8 tablespoons (1 stick) of the butter in a small saucepan over medium heat; let cool.

2. In a bowl, mix together the melted butter, warm milk, sugar, and eggs. Make a well in the middle of the flour mixture, and pour in the milk mixture. Stir until the mixture is shaggy and difficult to stir. Add more flour if necessary. Turn the dough out onto a lightly floured work surface and knead until the dough is smooth, about 5 to 10 minutes.

3. Shape dough into a ball and place in the greased bowl. Cover bowl with plastic wrap and let rest in a warm place until doubled in size, about 1 hour.

4. Line 2 baking sheets with parchment paper or spray with nonstick spray. Melt the remaining 4 tablespoons butter over medium heat; let cool. Divide the dough into 3 equal pieces. Working on a lightly floured surface, roll each piece of dough into a 10-inch circle. Brush each circle with melted butter. Using a knife or pizza cutter, cut each circle into 8 equal wedges.

5. Starting at the wide end of each wedge, roll up the dough, ending with the pointed tip on the bottom. Place 2 inches apart on the prepared baking sheets and curl in the ends slightly to make a crescent shape. Cover the rolls with plastic wrap coated with cooking spray and let rise until the rolls are doubled in size, about 45 minutes.

6. Arrange 2 oven racks to the upper-middle and lower-middle positions in the oven, and preheat to 325 degrees. Bake the rolls until golden brown, 25 to 30 minutes, switching and rotating the baking sheets halfway through baking. Serve hot or warm.

1. Beat egg yolks until thick and lemon colored; add 1/2 cup of the sugar, lemon juice, and salt. Cook, stirring, in a double boiler (or in a heat-proof dish over simmering water), until it reaches the consistency of a custard.

2. Meanwhile, soften the gelatin in the water for 5 minutes (it will turn rubbery). Dissolve gelatin in the hot custard, then stir in lemon zest. Cool until mixture begins to thicken.

1. Mix 1 cup of the sugar and the cinnamon in a medium bowl until combined, and set aside. Whisk the flour, baking powder, baking soda, salt, ginger, and nutmeg in a large bowl. Beat the eggs, buttermilk, and remaining 1 cup of sugar in a medium bowl. Make a well in the center of the flour mixture and add the egg mixture. Stir together to form a moist and sticky dough. If the dough is too soft to be rolled, add more flour, a little at a time.

3. Transfer the doughnuts to a floured baking sheet. Gather the scraps and gently press into a disk; repeat the rolling and cutting process until all the dough is used. (The cut doughnuts can be covered with plastic wrap and stored at room temperature for up to 2 hours.)

4. Heat the oil in a large Dutch oven over medium heat until the temperature reaches 350 degrees. Carefully lower 4 to 6 doughnuts into the hot oil. Turn the doughnuts as they rise to the surface with tongs or a slotted spoon and fry, maintaining a temperature between 325 and 350 degrees, until the doughnuts are golden brown on both sides, about 4 minutes.

5. Using a slotted spoon, transfer the doughnuts to a plate lined with paper towels and drain for 3 minutes. Toss the doughnuts in the cinnamon sugar and transfer to a plate. Repeat with the remaining doughnuts, regulating the oil temperature as necessary.

1. In mixing bowl, dissolve yeast in warm water. Stir in milk, sugar, salt, egg, shortening, and half of the flour. Mix with a spoon until smooth. Add enough remaining flour to handle easily; mix with hand or spoon.

2. Turn onto lightly floured board; knead until smooth and elastic, about 5 minutes. Form into a ball and place inside a greased mixing bowl. Turn until ball is lightly greased all over. Cover and let rise in a warm place until doubled in size, about 1 1/2 hours.

3. Roll dough on lightly floured board into a rectangle, 9-by-15 inches. Spread with butter. Stir together brown sugar, cinnamon, and raisins, and sprinkle evenly over the dough. Beginning with the long side, roll up tightly as for a jelly roll. Seal well by pinching the edges of the roll together.

4. Stretch roll slightly to make even. Line a baking sheet with parchment paper (or grease lightly) and form the roll into a ring on it, sealed edge down. Pinch the ends together. Use scissors to make cuts 2/3 of the way through the ring at 1-inch intervals, cutting from the outside of the ring toward the center. Fan out the sections so each one lies more or less on its side. Cover, and let rise until double in size, about 45 minutes.

6. Mix together powdered sugar, milk or water, and vanilla until mixture is of a spreadable consistency. Use this glaze to frost ring while it is still warm.