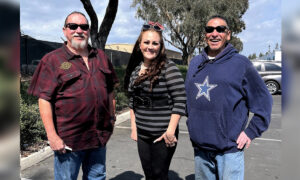 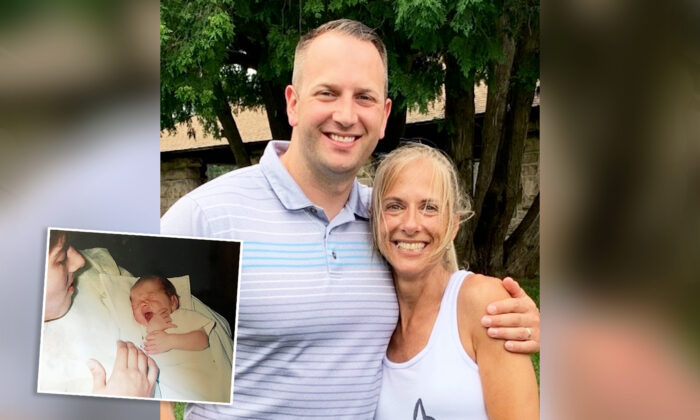 Ohio Mom Finds, Reunites With Son She Gave Up for Adoption 33 Years Ago Through DNA Test

An Ohio woman and Virginia man have reunited 33 years after she gave him up for adoption as a newborn baby.

Pressley, 53, hadn’t seen her son since the day he was born. Yet he never left her thoughts through all these years.

Born and raised in Canton, Ohio, Pressley became pregnant at the age of 19 in 1987. She took a pregnancy test at work to hide the evidence from her parents. Terrified by the results, she met and informed her then-boyfriend, who wanted her to have an abortion.

When Pressley said she couldn’t do that, the baby’s father walked away. She then broke the news to her parents with the much-needed support of her sister, LeeAnn.

After an intense and exhausting labor with her mother by her side, Pressley gave birth at Canton’s then-Timken Mercy Hospital on June 17, 1988. Nurses took the baby away immediately, but the following day, LeeAnn stepped in.

“She went and explained to a nurse that I didn’t get to hold my son and I would like to have that opportunity just once,” Pressley said, describing the nurse as “a true gift from God” for honoring the request.

Pressley was then given a private room and all the time she needed.

“I needed my time to hold him and tell him goodbye,” she said.

LeeAnn took a photo of the precious moment, which Pressley has revisited every year on Greg’s birthday. Pressley then signed the adoption papers, feeling empty.

“For 33 years, I mourned,” she said. “I knew I was not the same person anymore. I had a hole in my heart and it could never be mended.”

The baby was adopted by Rich and Patrice Vossler, who named him Gregory and pledged in a heartfelt letter to Pressley that they would be the very best parents they could be.

After the birth, Pressley got a new job and reconnected with a friend from school, eventually marrying him and having a son, Brian, who’s now 30 years old.

After the marriage dissolved, Pressley went on to work in finance and met Tim, her husband of 25 years, with whom she has two daughters: Rachel, 24, and Jessica, 22.

As the years went on, Pressley’s kids came to understand the depth of her grief. As a joint birthday and Mother’s Day gift in May, one of Melanie’s daughters bought her a gift: a DNA testing kit from 23andMe in hopes that she would find her son.

“To be honest, in the back of my mind, I too was hoping I would find my son, but also realizing what are the odds that we both would take the same DNA test,” Pressley said.

Meanwhile, Greg Vossler was raising a family and working in accounts at Green Bay Packaging Inc. when he decided to take a DNA test to learn about his genetic history. He had known since the age of 8 or 9 that he was adopted, but had never explored his roots in depth.

“Becoming a father, I realized I needed to look into this,” Vossler said. “Funnily enough, the 23andMe DNA test was a gift from my mom.

“I am very, very lucky to have supportive parents and a supportive family on each side urging me to explore this.”

Pressley opened her test results alone and was astounded to see a line drawn from her name to another: Greg Vossler. She made first contact by asking Vossler for his age, then letting him know that she thought she was his birth mother.

She then posed a meaningful question that let Vossler know that she had cared deeply ever since the day he was born: “Are you happy?” The pair began to message back and forth.

“To be honest, I couldn’t believe it was real,” Vossler said. “Even to this day, I pinch myself because I think I’m dreaming.”

Pressley met Vossler, his wife, Chelsea, and their two young sons, Gregory and CJ, for the first time on June 26. They talked “for what seemed like 15 minutes,” according to Vossler. In reality, it had been four hours.

“It was just beautiful,” Pressley said.

Vossler met his extended family in a meetup filled with love and laughter. After the mother-son duo connected, Pressley said her sister LeeAnn said: “I have my sister back. For 33 years, you were not Melanie, but now you’re back.”

When Pressley’s daughter Jessica and her fiancé, Max, invited Vossler and Chelsea to their wedding in October, the pair accepted.

Pressley has since enjoyed a warm visit with Vossler’s adoptive parents in Virginia. She and Vossler are intent on nurturing their bond and talk almost every day.

“I was so afraid of finding him and what he would think of me that I kept myself from trying,” Pressley said. “Little did I know, I had a son that was raised extremely well with a lot of love to give.

“I would also advise any young mother out there who chooses to place their child up for adoption: After giving them up, write a letter. Write it with all honesty and all your feelings, then tuck it away. … If the day ever comes and you reconnect with your child, give them the letter.”

This letter may give the child a healing insight into their birth parent’s experience, she said.

Vossler hopes that sharing his and Pressley’s amazing story helps people from all walks of life eradicate the stigma of adoption.

“My goal in life is to always make an impact, however big or small, in someone’s life every single day,” he said. “I hope this does just that!”