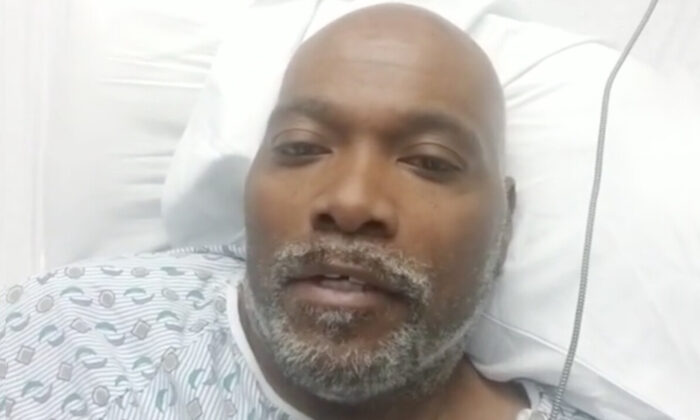 A 55-year-old grandfather from Warren, Ohio, shared footage from his hospital bed after a near-death experience with the CCP virus, commonly known as the novel coronavirus. His struggle and his recovery story are informing people globally.

Having returned home from the hospital, Kevin Harris spoke to The Epoch Times by telephone. Kevin said that he is “not a hero,” but simply wishes to share his experience in the hope that it will offer reassurance and help dispel misinformation. He represents a growing community of people who have experienced the CCP virus and beaten it.

“You’ve got to have the strength inside yourselves,” Kevin said. “With this virus, you have to be positive, you have to pray, and those respirators, that oxygen, medicine, it is not curing you—it is buying you time. Time for the immune system that God gave us to kick in and heal us.”

“I got sick on a Tuesday [March 3],” Kevin said, “and I didn’t go to the hospital until Sunday. They really didn’t know what was wrong with me until Thursday.”

Kevin was admitted to Ohio’s Mercy Health St. Joseph Warren Hospital on March 8, 2020, after experiencing a fever, shortness of breath, fatigue, and a persistent cough. He was diagnosed with the CCP virus three days later. The Epoch Times refers to the novel coronavirus, which causes the disease COVID-19, as the CCP virus because the Chinese Communist Party’s coverup and mismanagement allowed the virus to spread throughout China and create a global pandemic.

After his diagnosis, Kevin filmed a video from his hospital bed in the isolation unit and posted it on Facebook. To date, the footage has been viewed over 359,000 times on Facebook alone.

Reflecting on isolation, Kevin, a father of four and grandfather of three, told The Epoch Times, “As much as I like to be alone, when you are sick and you think you are dying, you want your family beside you. I think about all the people that have died alone because their families were not there.”

Medical personnel dressed in head-to-toe protective gear were Kevin’s only visitors. Responding to Kevin’s declining condition, they informed their patient that there was little they could do for him; Kevin recalled feeling “more and more depressed, angry, and hopeless.”

“All you can do is pray,” Kevin said, “and that’s what I did, a lot of praying, and I know a lot of people prayed for me, but [it] didn’t do much really for my spirits because I kept knowing that I was gonna die.”

Even when Kevin started to feel better in himself, X-rays indicated otherwise. Then Kevin’s experience of sickness also took a turn for the worse. Nine days into his hospital admission, Kevin became sick to his stomach and couldn’t sit up. Then, he encountered a paradox. “I [could] breathe again,” he said. “So I was actually looking forward to going through the worst part of it again, because I know that’s the best I have ever felt.”

Kevin said, “If I can keep getting up and getting the stuff out of my lungs, the pneumonia, and my heart, no matter how bad I felt […] I knew I was gonna live.”

He told The Epoch Times that he devised a new mantra: “I will live.” Three days later, Kevin was walking. The following day, he was able to leave the hospital. “I got really emotional,” he said, “because I started to realize that I didn’t die.”

Within days, Kevin regained the will and the ability to walk up and down the stairs, cook food, and take showers. “I am not over it yet,” he told The Epoch Times. “I am not through it and that’s what a lot of people don’t know. They just want you out of the hospital as immediately as possible to open the bed to somebody that is sicker.”

Kevin received a cocktail of high-dose vitamin C, cough medicine, an experimental antiviral drug, a malaria vaccine, and antibiotics, according to the New York Post. However, there are no vaccines for the new virus at this time. The Epoch Times stated in a report on March 16, 2020, that there are no proven treatments available yet, though some drugs have “shown effectiveness in some settings and are being tested by researchers.”

Kevin’s son, who plays football at Ohio University, remains away at college with the family’s puppy. Being home alone, Kevin has found comfort in an unlikely source: calls from well-wishers around the world.

“I got people calling from Australia, Norway, the Netherlands,” said Kevin, “all over the world. To talk to them, they make feel good because I can’t reach out to people since I am still so isolated.”

However, Kevin said that stories of recovery are not cause for complacency. Precautionary steps now, he said, will guard against a panic response later; be active and not reactive.

“On American TV everybody is kind of like happy-go-lucky and I see some people keep up social distancing,” he said. “But there are a lot of people who are not doing it, not getting it, not listening.”

Reflecting on his ordeal as a whole, Kevin said that his biggest lesson learned was simply to be himself in his fullest expression. He advocates that others do the same. “I know who I am and I know who I want to be to my family,” he said, “to my community, to my God […] I am just going to be more me.”

This Covid-19 patient shares his near-death experience in the hope it can help people understand more about it and avoid panic. It's worth listening to us all…*** EXCLUSIVE interview with Kevin Harris after he comes back home will be premiered tomorrow!