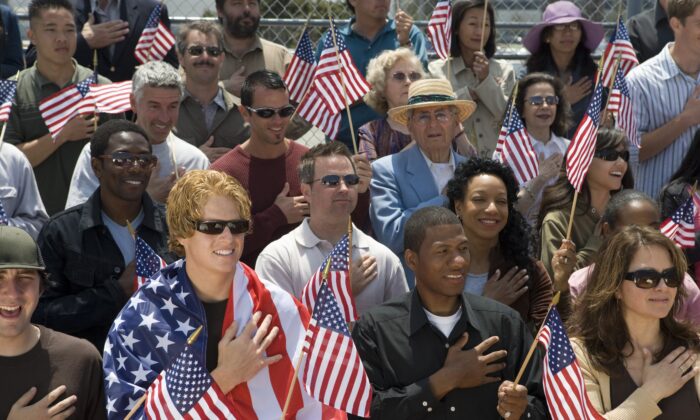 “I hear America singing,” the poet Walt Whitman once wrote.

Given the pandemic shutdowns, a summer of riots in some of our large cities, and an election so bitterly fought that it could make vinegar taste sweet, America isn’t exactly bursting into song these days. The general mood in our land is bitter and angry, and as glum as a man with a hangover at a funeral. Most folks, I suspect, may listen to music, but unlike Whitman, I don’t hear America singing.

Which is too bad.

In the past, and even recently, Americans celebrated themselves and their history in song. Music acted as a unifier, providing a bond for a diverse people. It championed the American way of life, honored working Americans, brought determination and comfort in times of war, and even taught a little history along the way.

A Tie That Binds

In my elementary school days, our teachers taught us American folk songs. We learned such classics as “Oh! Susanna,” “I’ve Been Working on the Railroad,” and “The Yellow Rose of Texas.”

One of my teachers from that time even dug out “Doctor Ironbeard,” a 19th-century satirical tune about a medicine show hustler. She asked me to sing it at a school assembly, thinking it might amuse the audience because my dad was the town’s doctor, but I refused, more from shyness than from wishing to protect my father. My friend Albert Shore became Doctor Ironbeard and gave a stellar performance that I remember to this day.

All these songs forged a bond among us and brought alive our past.

Songs About Those Who Built This Country

Those songs we learned from our teachers and from records at home often included lyrics about Americans from the past who helped make this country. “Sweet Betsy From Pike” told the story of a pioneer couple heading West, “John Henry” was the steel-driving man who died with a hammer in his hand, and “Low Bridge, Everybody Down” featured a man with a mule named Sal who pulled boats on New York’s Erie Canal.

In 1961, Jimmy Dean’s “Big Bad John,” written along with Roy Acuff, became No. 1 on the Billboard Hot 100. Man, I loved this ballad about a miner, “who stood six-foot-six and weighed two-forty-five,” a stranger with a mysterious past who saved the lives of his fellow miners by holding up “a sagging timber” when the roof of the mine began to collapse. “Big John, Big Bad John” made such an impression on me as a kid that I can still sing the lyrics today.

More recently, Billy Joel’s hit “Piano Man” described forgotten men in bars—the real estate novelist, the sailor, the bartender with dreams of being a movie star. The song speaks of disappointments and aspirations.

We’re all familiar with “Yankee Doodle,” originally composed during the French and Indian War to mock colonials, but the Revolutionary period also produced long-forgotten songs like “Chester” and “War and Washington.” The War of 1812 gave us our national anthem, and some soldiers and civilians in the Mexican-American War took popular melodies of the time and added new lyrics about such battles as Monterey.

But it was the Civil War that brought the greatest number of such songs into play, music that remains familiar to many of us today. “John Brown’s Body,” “The Battle Cry of Freedom,” “Dixie,” “The Bonnie Blue Flag”: Military bands played these and other rousing tunes, and the soldiers belted out the lyrics.

Other more sentimental songs found their place around the campfires of both armies: “We’re Tenting Tonight on the Old Camp Ground,” “Just Before the Battle, Mother,” “All Quiet Along the Potomac Tonight,” and “Lorena.”

World War I saw American soldiers and sailors singing a mix of songs from Great Britain and from our own Tin Pan Alley. Our soldiers and Marines, for example, adopted “Pack Up Your Troubles” from British troops but also took to the songs of American composers like “Over There” and “Oh! How I Hate to Get Up in the Morning.” One humorous song—“How Ya Gonna Keep ‘Em Down on the Farm (After They’ve Seen Paree?)”—noted the new perspective that the war had brought to the hundreds of thousands of Americans serving overseas.

With the invention and soon widespread use of the radio, soldiers began listening to music more and singing less, at least when they were together. They still shared songs in common, such as World War II’s “Boogie Woogie Bugle Boy” and Vietnam’s “Run Through the Jungle,” but the stronger bond of singing, particularly patriotic songs, has largely disappeared.

Though the younger generation may find it unbelievable, when I was a kid, a good number of popular songs came out of American history. Larry Verne’s “Mr. Custer,” The Kingston Trio’s “Tom Dooley,” Fess Parker’s “The Ballad of Davy Crockett,” and Tennessee Ernie Ford’s “Mule Train” were some of these childhood favorites.

And then there was Johnny Horton, king of the historical ballad. Though he didn’t compose all the songs he performed, this singer and songwriter gave my childhood a trove of such gifts as “Comanche,” “Sink the Bismarck,” “Johnny Reb,” “North to Alaska,” and what remains his best-known hit, “The Battle of New Orleans.”

Although I occasionally brought music to the students in the history classes I once taught, now I wish I had made use of that resource far more often. In fact, were I to return to the classroom, I would design an entire course of American history around our musical past. The kids would love it, and from personal experience I know now that songs stay with us long after we may have forgotten dates and events.

A Prayer for America

Originally written in 1918 by Irving Berlin, “God Bless America” became a major hit when it was sung by Kate Smith in 1938. Berlin made several changes to the song in that 20-year interval, giving us the version so many of us know today. Here is the first stanza:

God bless America, land that I love
Stand beside her and guide her
Through the night with the light from above

From the mountains to the prairies
To the oceans white with foam
God bless America, my home sweet home

These lines that once brought pride to Americans probably seem antiquated nowadays to some people or even deserving of repudiation. Do we still think of America as the “land that I love”? Do we ask God to bless this country? Do we still think of this beautiful land as “my home sweet home”?

Those of us who answer yes to those questions should make this song our anthem of hope in these dark times.

Light in the Darkness

In her online article “Civil Disobedience, Homestyle,” editor and writer Annie Holmquist recounts her family recently gathering around a piano and singing some of the songs mentioned here. She reports the positive effects of such entertainment, ranging from the mental and physical benefits of singing to the hope and patriotic pride delivered by some of these American classics.

Near the end of her article, Holmquist writes: “By singing these songs, we instill the truths contained in their words in our hearts. We learn once again to have faith in God, to gather and build community within our own families, and to delight in the blessings of living in a country with a wonderful history and heritage.”

Just as music once brought solace and comfort to those in distress, just as it inspired our ancestors to take pride in their country, song can do the same for us.