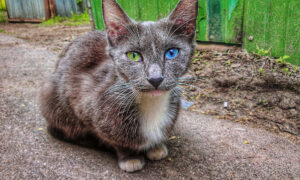 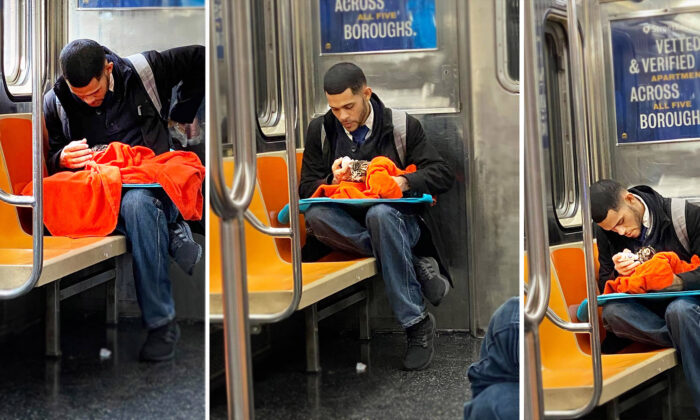 While riding the New York City subway home one day, commuter Gillian Rogers did a double-take when an unexpected scene caught her eye: a fellow passenger bottle-feeding a tiny kitten.

The sight of the tiny kitten, wrapped in a soft orange blanket, and the tenderness displayed by the man were particularly pertinent to Rogers; she is the founder of Pet Rescue Squad Inc., a cruelty intervention and rehoming group for unwanted pets.

She snapped several candid photos of her fellow passenger, and his tiny charge, to share on social media.

“You could see the caring,” Rogers told The Dodo. “My heart felt like it was going to explode to see someone with that much caring. He was so in the moment.”

Rogers approached the man and asked him to tell her more about his story. He explained that he had found the kitten alone, between two buildings, and had taken it upon himself to rescue her.

“The kitten was looking up at him as he fed her,” Rogers recalled. “It was so heartwarming.”

Rogers had time to offer her fellow passenger, who remains anonymous, a heartfelt “thank you” before she reached her stop, at which time their interaction came to an end.

The animal rescuer’s day was already changed for the better.

“It was truly a special moment,” she explained. “When I got off the train, I felt like I was walking on air … it renewed my faith in humanity. There are still decent people out there.”

She shared a photo of her unexpected encounter on Instagram, captioned, “When you see a guy bottle-feeding a kitten on the subway,” adding a heart emoji.

An orphaned stray kitten stands the greatest chance of survival if a kind human intervenes. Yet, determining that a kitten has truly been abandoned by its mother requires a little detective work.

Alley Cat Allies advises that more often than not, a lone kitten’s mother, the kitten’s “best possible caregiver,” is nearby. She may be hunting for food or may even be afraid, hiding and waiting for you to leave.

With the exception of finding a kitten or litter in discernible danger, such as on a busy street or near a fire, experts advise waiting up to 24 hours to see if a mother cat returns before intervening.

“I did let him know to go back and check to see if mom and others were there,” Rogers told The Epoch Times. “The kitten, I think, was better off with him than on the streets.”