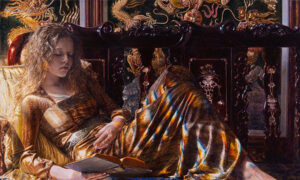 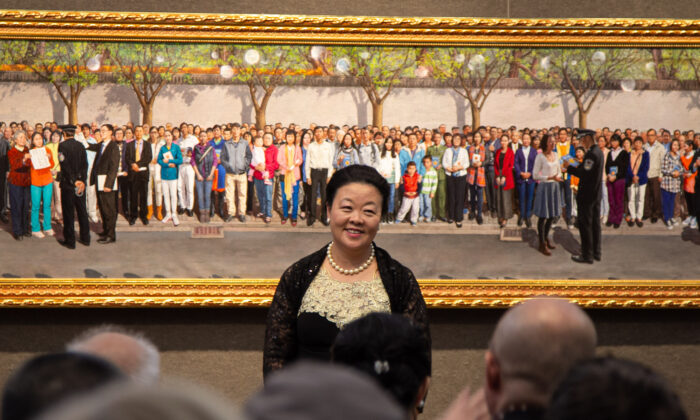 Haiyan Kong won the Gold Award at the 5th NTD International Figure Painting Competition with her work "April 25th, 1999" on Nov. 26, 2019, at the Salmagundi Club in New York. (Chung I Ho/ The Epoch Times)
Traditional Culture

The theme of the competition, "pure truth, pure kindness, and pure beauty," inspired many of the artists
By Catherine Yang

NEW YORK—Sandra Kuck has been a professional artist for 50 years, and in her time has participated in many competitions and earned many awards. On Nov. 26, 2019, at the 5th NTD International Figure Painting Competition awards ceremony, Kuck said the finalist paintings on exhibition made it one of the best shows she has seen.

“Really, I’ve been to a lot of shows, and this is one of the best,” said Kuck, who won the Technique Award at the NTD competition. In fact, Kuck had participated in the last competition held by NTD five years ago as well and said the level of works in this round was 10 times better.

Seeing her fellow finalists’ works in person, Kuck was inspired by the mastery of some of the works.

Hanging right across the room from Kuck’s own work, “Yin and Yang,” was the painting “Unmoved Under Immense Pressure” by Chin-Chun Liu, which this year won the Silver Award in the competition.

“It’s very classical,” Kuck said of the composition and style. She discussed the use of darkness in the surroundings versus the light of the main figure. “The light is coming out of her.”

“And that is a very difficult pose to paint, and it’s captured very well,” Kuck said. The figure is solemnly looking up, and her eyes are not fully visible to the viewers—yet one’s gaze is immediately drawn to her face. “Even though the eyes aren’t visible per se, it captures the sadness. The other thing that’s great about the painting is the skin tone is practically the same color as the dress—so that shows great accomplishment. That shows a master, that was able to do that. There’s a delineation between her hands, the dress, and yet those all use similar kind of flesh tone. It’s a little tiny nuance in the values. I think that’s a real masterpiece.”

Behind the solitary figure of light, everyone else is in motion, every person in mid-gesture down to their fingers, even in their props, Kuck said. “Every inch has a meaning; I like that,” she said. Kuck is masterful at depicting details herself and has in many past works lushly done so in her romantic realism style. But seeing “Unmoved Under Immense Pressure,” Kuck was inspired to try something more classical.

The NTD International Figure Painting Competition received over 400 submissions from 258 artists from 46 countries. These included top representational artists from around the world, and 103 of these paintings are on exhibition at the Salmagundi Club in New York through Nov. 30, 2019.

The theme of the competition was “pure truth, pure kindness, and pure beauty,” and many artists commented that they were encouraged by NTD’s efforts to restore tradition.

Professor Zhang Kunlun, the head judge of the competition, said he was so appreciative of the representational artists who participated in the competition, as they are helping preserve one of the best and most precious achievements of humanity.

“Nowadays art has degenerated to the extent to the point of no return, so to see that there are still so many artists walking the path of tradition … we must do so. Our arts must return to path gifted to us by the divine, human culture has to be restored, this is evident,” Zhang said.

During the exhibition, a student of the professor’s who had recently visited Italy told him that such an exhibition is truly hard to find today. Even in the halls of the Vatican, contemporary and abstract styles fill the spaces between the Sistine Chapel and the Raphael rooms, and you cannot capture pure truth, pure beauty, and pure kindness with these forms that do not value skill and technique.

The professor was moved to hear this, having seen galleries around the world, and his student told him she felt it was a necessity to have organizations like his work to restore human culture and encourage these great artists.

Joseph Daily, who won a Bronze Award with a self-portrait, was happy to see there were others taking this as their mission. As a child of two illustrators, Daily grew up versed in visual language and shot to prominence after a portrait he made of Minnie Churchill. He remembered even in his visual arts studies in university, he had to really fight to be able to learn representation techniques, as all the fine arts classes focused on abstract expressionism.

“That’s changing though, and I’m happy to see it. I think this competition is part of the trend,” Daily said.

Two of his works were on show at the exhibition, one a portrait of his wife Maria, and the self-portrait that won an award.

Daily normally creates self-portraits as a technical exercise, serving as his own model for practice from painting from life. But when he created the award-winning self-portrait, it was because he happened to have a piece of canvas that came out to a specific size.

“When I was looking at it, I realized that at that size, if I did a life-size portrait it would be cropped so that it would just fit head and hands, so I highlighted that at the top and bottom of the painting. … I was thinking, what could I hold that was going to mean anything to me, and it would have to be my cross,” said Daily, whose faith is foundational to his life. “It’s rare, I don’t paint imagery like that all the time, but I hope that everything that I do on some level is an expression of gratitude for God and for being able to exist in creation.”

“So I sort of just stumbled into something more meaningful to me, as usually my self-portraits are more of an exercise. … In this case it was more of a deeper, more symbolic image, and I’m grateful for that,” he said.

Bronze Awards: “Birds of the Air, Grass of the Field” by Lauren Tilden, “Plum in the Snow” by Shi-ju Chiang, “Self Portrait Preparing for Worship” by Joseph Daily

Technique Awards: “Child Fighter” by Philippe Lhuillier, “Eat and Not Be Eaten” by Jesús Inglés Canalejo, “Yin and Yang” by Sandra Kuck