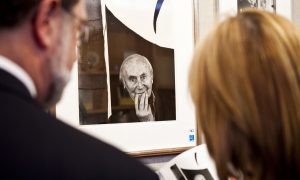 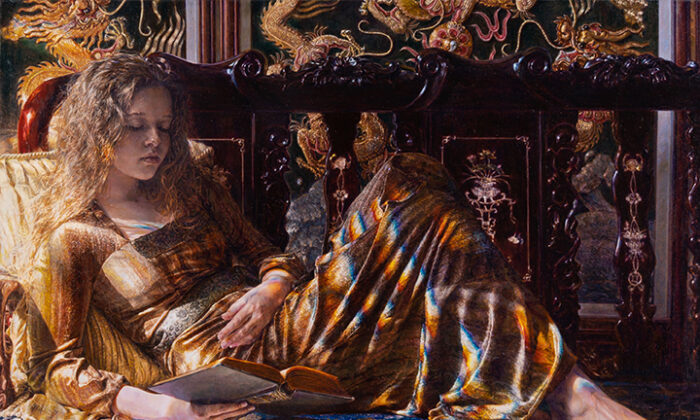 "Yin and Yang" by Sandra Kuck, who is a finalist in the NTD 5th International Figure Painting Competition. $50,000. Oil on Canvas. 36 x 24 in. Artwork on supported wooden frame. Ready to hang. (Sandra Kuck)
Arts & Culture

Sandra Kuck has been an artist all her life, drawing and sketching constantly in her notebook as a child, before starting a career in painting at age 22. She was completely self-taught.

“My husband would bring my work [to galleries], I was too shy,” Kuck said. That was 50 years ago, and she’s since spent over three decades doing gallery as well as commercial work, and then traveling the world to create custom portraits.

Kuck initially worked in acrylics because of the time constraint of her work, but she had always had an interest in oils, so eventually she pursued further schooling and threw herself into fine art.

She describes her work as romantic realism, and while these works may seem to buck the trend of what is often seen in the contemporary art world, Kuck seems to have never bothered with trying to keep up with arbitrary trends outside her own world.

“[Romantic realism] is just what I would describe the way I paint, it’s Old World, I think, and I celebrate beauty,” Kuck said. “There’s a renaissance of realistic arts.”

One organization participating in this renaissance is NTD Television, which is organizing its 5th International Figure Painting Competition in New York City—where Kuck has placed as a finalist with her painting “Yin and Yang.”

The oil painting depicts a young girl reading on a bench, before an intricately ornate background.

“There is a prism of light that goes across her body and her dress,” Kuck said. A complicated feat, because the dress is striped, and crossed with bands of rainbow light. “In the back there is a Chinese screen.”

On that screen is an embroidered yin and yang symbol, and Kuck felt it was a fitting title.

“It sort of represents the balance of the world, the idea of the painting, with the light,” Kuck said. “It has that feeling.”

The setting is actually in Kuck’s home, and the young lady is her 15-year-old granddaughter, sitting on the Chinese bench where she likes to read.

“It was just so striking and beautiful. We have a stained glass at the top of the living room and the sun comes through only in the morning, and I didn’t realize that the prism came through, and how it fell across her chest and her hand, all the way down to her bare foot,” Kuck said. “I like to paint things and people that I’m familiar with.”

Kuck’s paintings are rich in detail, and take several months to complete. “Yin and Yang” took half a year, with Kuck working on the painting every day.

Kuck has a library of Old Masters’ works, and she refers to her books for beauty and inspiration. She also has three granddaughters who are regular models of her works, and a house full of the sorts of textures and items she wants to depict in her work.

“I never run out of ideas. As I’m painting one painting, I have two others going at the same time,” Kuck said.

Having been an artist all her life, Kuck says if there’s one thing she’s learned, it’s that hard work pays off. Oil painting, in particular, requires a sort of temperance and patience, on top of vision and the skill to execute on that vision.

“There’s so many different ways of approaching oils,” Kuck said. For instance, she uses a special sort of ground for her canvases, which she learned from studying with Odd Nerdrum, and paints layer by layer.

“I paint in layers, thin layers, and in between I use a medium of stand oil and turpentine, and I don’t use dryers, I let it dry on its own,” Kuck said. “So I really don’t know what I have as far as the finished painting until I put the final medium over it and all the colors come together.”

Kuck admits to perfectionism and is the meticulous kind of artist who ends up working until the very end of her deadline. But she is also keenly aware of not overworking a painting in a way that only experience can provide.

“You have to come to that point,” she said. In fact, it’s something many artists struggle with, and some leave their works unfinished so that they can always come back to them. Kuck finishes her work.

“In actuality, you can always go back and correct something. But when the whole painting is in harmony, that’s the time to quit,” she said. “It’s very mathematical, and it’s a feeling that comes over you and you say, ‘OK, this is it.'”

But it might not be until about a month later, when she looks at it with fresh eyes, that she will say it’s a good painting.

“Because after six months of working on something, you do lose perspective. Then I’ll see it a month later and think, ‘Oh, I really like that,'” she said.

“It’s always a fight for me. I’m always fighting with my painting. But in the end I win,” she said with a laugh.

And the sort of fight an artist goes through is a rewarding one, something she feels artists are lucky to have.

“Being an artist for my whole life, I’ve been very blessed because it’s a form of meditation and I’m very thankful for that,” Kuck said. “You cut off yourself from everything around you, and you go into this state of mind that it’s just you and the painting.”

“If it was possible, I’d have one wish, that I could have another lifetime so that I could finish all the works that I have in my brain,” she said.

The finalist exhibition will be open to the public at the Salmagundi Art Club at 47 Fifth Ave. in Manhattan from Nov. 24–30. Winners of the competition will be awarded on Nov. 26, and auctioning of the works will take place on Nov. 30. For more information, please see oilpainting.ntdtv.com

More of Kuck’s work can be found through her website: SandraKuck.com