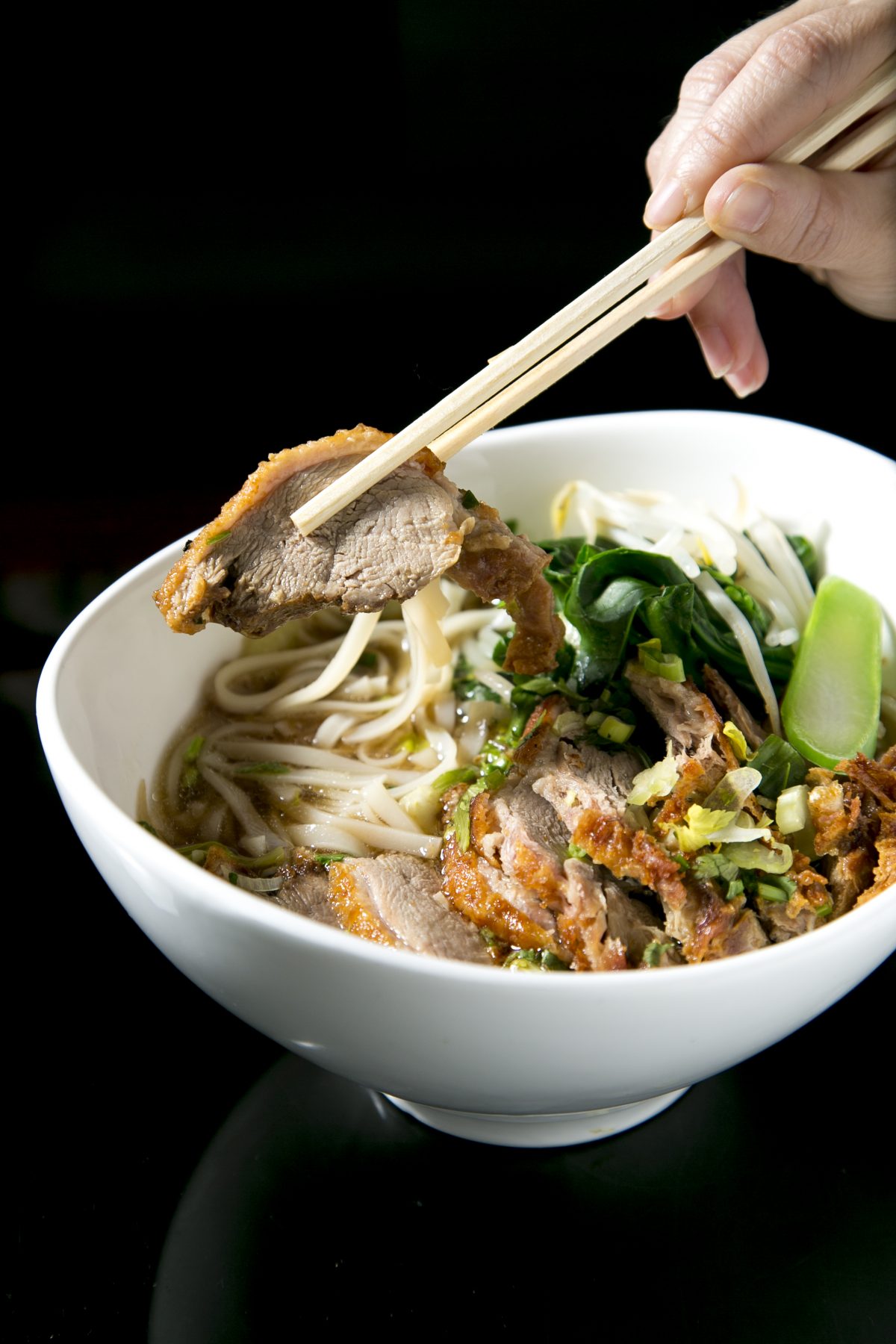 Noodies: A Thai Restaurant That Marches to Its Own Beat

Amy Kawpunna has an unaccountable love for noodles. Hand her a green curry chicken dish, for example, and she’ll take it with noodles over rice.

So it is only natural that her Thai restaurant, Noodies, would attract those kindred spirits, like one colleague of mine who eats there regularly and shares that same affinity for noodles over rice (never mind that most of the noodles are made of rice).

For example, Tom Yum, a Thai standard soup that normally comes, well, as a soup, includes flat rice noodles in addition to chicken, ground shrimp, mushrooms, and also shrimp tempura, in a lemongrass broth. It’s unusual but tasty ($12.95), and was probably my favorite dish of the ones I tried there.

Traditionally a noodle soup favorite, yen ta fo (or yien ta four, as the menu spells it) is time-consuming to prepare, but Kawpunna makes her own base. The textures make for most of the fun: crunchy shrimp balls, spinach, shrimp, noodles, chips, in a coral-colored tomato broth. ($12.95)

The Noodies Duck Noodle soup ($14.95) is also a good pick for this weather, with its crispy duck and Chinese broccoli.

The portions are all generous.

“Noodies,” by the way, isn’t a typo. It refers not only to the noodles here but also to the purity of ingredients that Kawpunna said she values. Some might recall British celebrity chef Jamie Oliver, who used to dub himself “The Naked Chef.”

Kawpunna has made other choices, too. No MSG here, for one. “I’m allergic,” she explained.

With the exception of the salads, such as the papaya salad, she’s also opted to not use fish sauce, a common ingredient in Thai cooking, and instead use mushroom soy sauce. “It tastes better,” she said. It’s a big plus for vegetarians and vegans, who don’t have to suspect the ubiquitous fish sauce in the most innocuous-sounding dishes.

For those who eat gluten-free, the Pad Won Sen uses bean thread noodles, and the Pad Thai can also be made gluten-free.

For some dishes you’ll be asked if you prefer it mild or spicy. Mild will be very mild. But say “spicy” and it will earn you a tray of condiments that you can use to adjust the spiciness to your taste. Restaurants in Thailand might feature a number of condiments on the table, and diners are welcome (and maybe expected) to tweak the dish to their individual taste.

If you prefer bolder flavors, it’s an absolute must. The pickled jalapeños add a bright tang; the hot sauce, which Kawpunna doctors herself with sugar and vinegar, is good for about a medium level of spiciness; and the ground red pepper is a tongue scorcher.

Kawpunna, who was trained as a pharmacist in Thailand, learned to cook for her in-laws and is now the cook on call for large gatherings such as birthdays.

Kawpunna is particular about making her curries just so, coming into the restaurant in the mornings to simmer spices, herbs, and the coconut milk until it all melds into a creamy whole. By comparison, restaurants where cooks are in too much of a hurry spend about 10 or 15 minutes to mix the coconut milk, spices, and other ingredients, making for a sauce that’s too thin.

The vibe at Noodies, in Hell’s Kitchen, is at once low-key and lively. The restaurant makes the most of the narrow, cozy space, with tables lining the sides. One wall is decorated with colorful plates, and the other is more minimalist, with exposed brick and a painting of—what else—a nude.