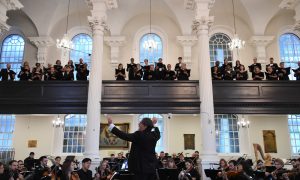 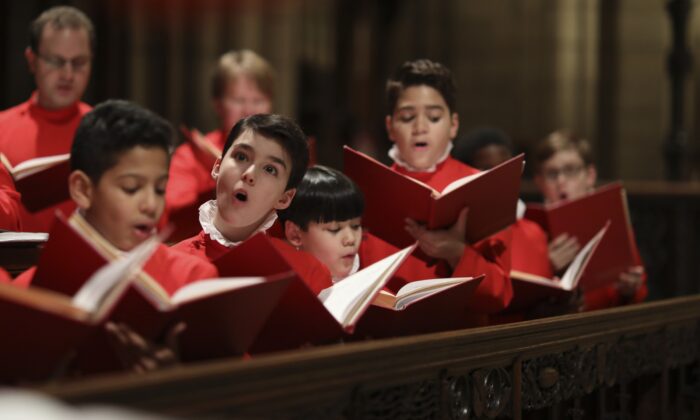 St. Thomas Choir School boys continue the tradition that Dr. T. Tertius Noble set back in 1919 when he founded the school, aiming for the highest standards for music at St. Thomas. (Ira Lippke)
Performing Arts

One block south of New York’s Central Park, a 1,000-year-old choral tradition is thriving at Saint Thomas Choir School. The chorister boarding school is one of only three such schools worldwide, which include Westminster Abbey Choir School in London and Escolania de Montserrat near Barcelona, Spain.

This year, on Nov. 7, as part of the choir’s 100-year celebrations, it will hold a concert, “Saint Thomas Choir School at 100,” with the Orchestra of St. Luke’s.

Choir alumni reminisce about their school days in the 2015 documentary “T. Tertius Noble & the Saint Thomas Choir School: The First Century.” Tom Carroll, a chorister in the class of 1945, remembers Noble as “the most soft-spoken, loving director” and a “surrogate father to his whole choir.” “We learned a lot from him; it was extraordinary,” he said.

“He was impeccable in his playing, in his compositions, and his directing of the choir,” said John Papps, a member of the class of 1944. Papps believed that if Noble had stayed in England, he could have been in the “pantheon of Romantic Victorian composers. … They were all in the same category of great composers of Anglican Church music—and they did some beautiful compositions.”

Excerpts of Noble’s cantata “Gloria Domini” will be performed at the Nov. 7 concert to commemorate this rare choral tradition that remains in the heart of Manhattan.

What It Takes to Be a St. Thomas Chorister

Today, 29 boys live and study at the school. To be a student at St.Thomas Choir School requires a certain kind of “sparkiness,” said Victoria Vanasco, director of admissions, in an email. Boys enroll at the school from the third to fifth grades, and besides their having the obvious “interest and aptitude for music,” Vanasco said that prospective students need to be energetic, with a natural curiosity to try new things and to challenge themselves. That’s the spark she’s looking for.

Not all applicants need to have learned an instrument or been in a church choir, although that obviously helps. “We tend to emphasize musical potential rather than polish,” she said.

“For a third grader, we look for a good ear, an interest in music, a trainable voice, and that spark,” Vanasco said. The higher the grade, the higher the entry standards, due to the limited amount of time for training the older boys before their voices change, she explains. When a boy’s voice breaks and he is no longer able to sing as a treble, he becomes an acolyte who assists in the church service. Acolytes continue with all aspects of choir school and sing in the chamber ensemble. Some, if selected, join the gentlemen‘s choir and sing as altos, tenors, and basses.

Musically, the boys are being shaped as professionals from an early age: The students prepare over 450 music pieces a year and spend over 20 hours a week in rehearsals, services, and performances. The boys also have scheduled, individual voice and instrument lessons and practice.

“It has made me into a better musician, both in vocal and instrumental capacities,” said 13-year-old Jonathan Bolena, an acolyte, from Staunton, Virginia, as he and a current chorister, Quinn Vanasco, responded by email.

The school encourages the boys to “try your best and do your best,” said 11-year-old Quinn, from Buffalo, New York. “It makes me less afraid to be up front [and] to be willing to do things I may never have imagined doing,” he said.

Resilience, no doubt, is a key quality for a St. Thomas Choir School student, because not only is there that solid foundation in sacred music, but the school also has rigorous academic and sports programs. Then, of course, the boys board at the school, living away from home at an early age.

Family and ‘The Band of Brothers’

Except for the third graders, all the boys at St. Thomas Choir School board full-time at the school, along with the core teaching staff.

Of course, the boys are homesick; they are young, after all. Tom Carroll said that boarding wasn’t easy in the beginning, “but you come through it a bigger and better person than you were before.”

All students, past and present, seem to speak of the boarding experience as one that strengthens and develops their character as young men.

The students affectionately call themselves “The Band of Brothers.” Quinn and Jonathan both say that boarding has made them better prepared for life after St. Thomas Choir School, when they go off to high school and college.

“It has changed my perception of different cultures and made me more accepting of the people around me,” said Jonathan, who enrolled when he was in fourth grade and is now an acolyte in eighth grade.

“The school has made me adept at solving my own problems and made me a more socially active person since I am around my friends and faculty so much,” said Quinn, now in seventh grade.

Victoria Vanasco stresses to parents that boarding school is not about dropping your child off in September and not seeing him until June. There’s time for family: “everything from coming to the weekly Sunday lunch and hanging out together in the rec room, to Christmas Eve dinner, to the annual pilgrimage to camp for parent’s day,” she said. Current students hail from eight states, yet she says the families all feel like one extended family.

Vanasco should know, as she has the benefit of being both a parent and a staff member at St. Thomas Choir School. Her son Quinn started in fifth grade, and when he was in seventh grade, she began working at the school.

“I see him becoming this remarkably capable person … who now knows on a very real level what it takes to become world-class at something, how to be resilient. He will carry that with him wherever he goes from here,” Vanasco said.

A Sacred Responsibility: Preparing for Evensong

Five times a week, the boys put their musical training into practice when they sing Evensong at St. Thomas. The boys continue the tradition that Noble set back in 1919 when he founded the school, aiming for the highest musical standards for their sacred music.

For the choristers, it’s not only about singing. It’s about personally holding themselves to the highest standards, having that reverence and professionalism. Jonathan believes it’s important to “set an example, whether kneeling or sitting, not talking, showing respect for whoever is [there], and showing that you really care about what you do and how you do it.”

“While not everyone considers this possibility, we not only lead the choir in the music but also mentally and spiritually,” Jonathan said. “One of the many ways to calm people into a spiritual state of mind is through our music. It is the most powerful gift we have,” he said.

“The music we sing really conveys the message that the priests and church are trying to give to people,” Quinn said. We understand that message through practicing and rehearsing the piece of music, he explained. “We try to convey the meaning by feeling the emotions ourselves and hopefully the congregation feels it too.”

Before Jonathan sings, he imagines himself sitting in the congregation and asks himself how he would like to feel having those “beautiful melodies float right past” him. Now, as an acolyte, he loves watching the congregation. “When they listen to the music, you know their mood has changed. You know that it has brought them into a worshipful state,” he said.

To find out more about the “Saint Thomas Choir School at 100” concert on Nov. 7, visit  SaintThomasChurch.org