No Words to Express the Beauty of Shen Yun, Says Singer 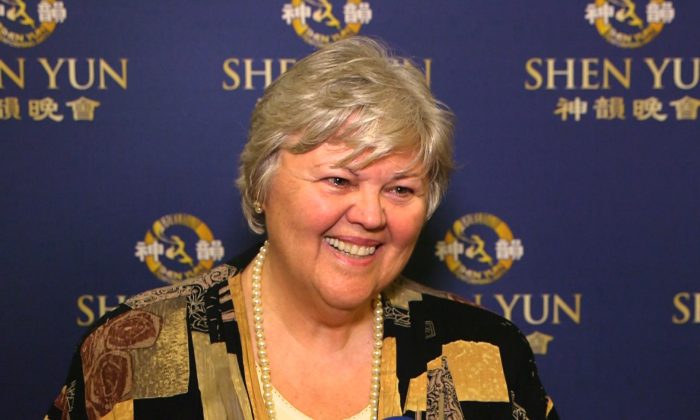 Roberta Seno says she saw lovely advertisements for Shen Yun Performing Arts for about three years before she was finally able to attend at the California Center for the Arts in Escondido, Calif. on Feb. 22. (Courtesy NTD Television)

ESCONDIDO, Calif.—Singer Roberta Seno said she saw lovely advertisements for Shen Yun Performing Arts for about three years before she was finally able to attend at the California Center for the Arts on Sunday, Feb. 22.

“I don’t know that there’s words to say how beautiful the performance is,” she said. “It’s wonderful. I am so glad that I came.”

Since its founding in 2006, Shen Yun has been on a mission to revive the true, ancient culture of China, which has a history of 5,000 years. This culture was considered to have been given to the people from the heavens, but it has been nearly lost in the past few decades through communist rule, according to the company website.

“Entirely non-profit, and independent of the Chinese regime, Shen Yun enjoys the artistic freedom of New York, enabling it to now bring these ancient traditions to the stage,” states the website.

“This show was emotional, funny, dramatic … and there is a divine element,” said Ms. Seno. “I could feel the generations in the pageantry.”

Ms. Seno said she was emotionally touched by the beauty and the grace of Shen Yun’s dancers.

“There is like a purity,” she said of the performers. “I think we don’t have enough of the beauty and the purity.”

As a singer, she was very impressed with the soprano soloists and their lyrics, which were projected onto the background.

Ms. Seno was grateful to Shen Yun’s performers for sharing their talent “to bring hope for the Chinese people who are in China, who are so captive there,” she said.

As tears welled up in her eyes, she said she remembered very vividly the Tiananmen Square massacre and how the students were gunned down.

“I thought there is hope,” she said, after seeing Shen Yun. “I think it will come from an element of divine power. I don’t think it’s too far away.”

Ms. Seno said anyone who has not seen Shen Yun needs to come and see for themselves.

“You just need to come and see it,” she said. “There isn’t anything else I can say. There is no way to explain it.”

‘The most beautiful performance I’ve ever seen’

Sandy Carter, a travel consultant and a developer, attended Shen Yun Performing Arts Wed., Feb. 18, then decided to come back on Sunday and bring her mother-in-law.

“It’s just fabulous,” she said. “The most beautiful performance I’ve ever seen.”

Ms. Carter said she was in China last year, but she didn’t see anything like Shen Yun. She was highly impressed with every part of the performance.

“Everybody is so in sync,” she said of the dancers. “It was just fabulous, the colors, the gowns, the singing. I like the background when they are doing the legends. Beautiful.”

“We’ve seen shows in Las Vegas, Hong Kong, and this is the best, top show,” she said. “The beautiful dancers were so gorgeous, lovely, and beautiful. Perfect.”

Denice Obrero, a city planner for the city of San Clemente, agreed.

“I didn’t expect to get such an uplifting feeling, sort of a sense of wonderment at everything,” she said. “The professionalism was outstanding – every performance.”

Ms. Domito also designs jewelry, and she was inspired by all the beautiful colors in Shen Yun. She also loved a Hmong folk dance piece in which the women dancers wore elaborate silver necklaces that jingled as they danced.

“I was taking notes in my head,” she said, thinking, “I can make that.”

“We are going to tell everyone to come to see it,” said Ms. Obrero. “It is a priceless experience for all generations.”