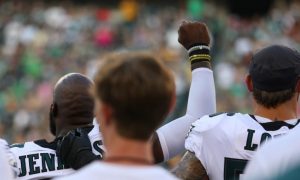 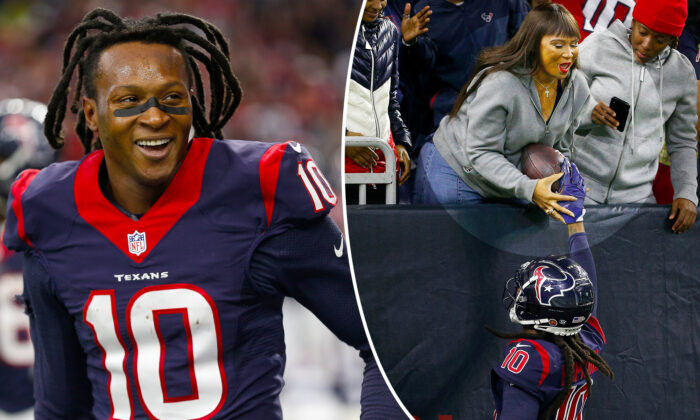 When Houston Texans’ wide receiver DeAndre Hopkins scores, he has a unique, celebratory ritual; Hopkins finds his mother and hands her the touchdown ball.

He repeated that ritual on Nov. 21, 2019, after scoring a touchdown against the Indianapolis Colts near the end of the second quarter of a home game. The wide receiver found his mom, Sabrina Greenlee, in the crowd and placed the ball in her outstretched hands.

In photos shared online, Greenlee holds the ball over her head, beaming from ear to ear. There was cause for celebration among Hopkins’s relatives and fans that day; the star player scored two triumphant touchdowns and the Texans won the game 20–17.

But why is Hopkins’s touchdown ritual so special? Greenlee was blinded in an acid attack in 2002 and is unable to watch her son play football.

Greenlee lost her vision when a woman threw lye and bleach on her face during a domestic dispute; the dispute involved a man that Greenlee had been in a relationship with.

Hopkins was no stranger to domestic violence in the family home growing up. “He saw the screams and [heard] the noise behind the door that he wasn’t allowed to touch or come in as a young boy,” Greenlee shared with ESPN in October 2019.

After the acid attack, Greenlee was left for dead at a gas station. First responders arrived and airlifted Greenlee to a burn center in Georgia, where she was placed in a medically induced coma. She remained in that condition for several weeks before waking.

“[A]s I’m lying there, the first thing I’m thinking is, ‘Why would someone pour warm water on my face?’” Greenlee recalled. “But a couple of seconds later, I realized it wasn’t warm water, because my skin is literally falling off my face, my neck, my chest and my back.”

Today, having endured a harrowing recovery and reclaimed her independence, but never her sight, Greenlee runs a non-profit organization called SMOOOTH (Speaking Mentally, Outwardly Opening Opportunities Toward Healing). Their mission statement is to “empower, educate, and prepare survivors of domestic violence by acknowledging, celebrating, and affirming themselves.”

Hopkins, now 27, was only 10 years old when his mother suffered her horrific attack. As per Today, Hopkins later enrolled at Clemson University, where he became a star on the football team and caught the attention of the Houston Texans.

According to CBS Sports, Greenlee always sits in the same seat at NRG Stadium during Texans’ home games so that she can hear the ball hitting the turf. And although the star wide receiver’s mom attends nearly every Texans home game, she has never been able to see Hopkins play in the NFL.

Greenlee told ESPN that she witnesses her son’s prowess in her mind. “I visualize everything that he does,” she said. “The dreads, the body movement.”

Hopkins knows. “Whenever I score a touchdown or do something, I try to make sure she gets the ball so she can feel me,” he explained.

“I’ve not always been your typical role-model mother,” Greenlee added, “and he still respects me enough to let everybody see him give me that ball. That ball symbolizes so much more than people ever could understand.”