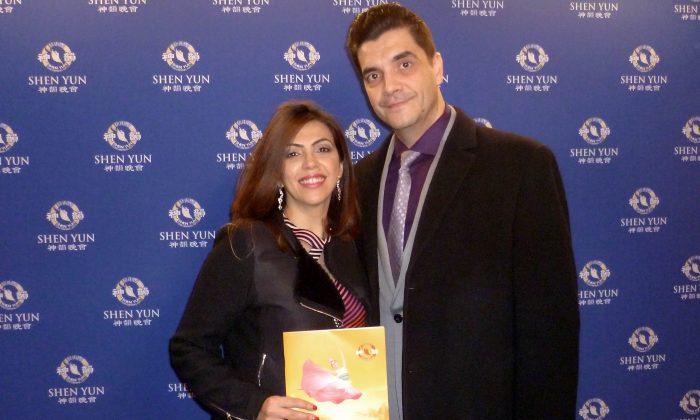 Newlyweds Danny Marcelino and Celia Esteves enjoyed the Shen Yun performance at the Four Seasons Centre for the Performing Arts in Toronto on Jan. 6, 2018. “It felt really good to just stop and pause and be able to just witness how [Shen Yun] did it and the atmosphere that they've set up so that it makes you feel like you have a better understanding of the culture,” said Ms. Esteves. “It was just phenomenal.” (Dongyu Teng/The Epoch Times)

“It was very good. The music, the colors, the costumes, everything was really good. The stories were amazing too. We liked the stories because there were different stories, it wasn’t just one continuous one—there’s multiple stories going into it.”

“I liked [“Han Dynasty Sleeves”] a lot, and [“Monkey Battles Warlock”], with all the colors and whatnot in the cave and the color just came to life. That was really nice. Like I said, the stories are really good and they all went with the colors and the costumes. Overall, it was great. And the theater is fantastic. The sound was amazing.”

“[Values depicted include] being good to others basically. Stop being selfish and following the crowd but do what’s right and helping other people when you can.”

“I loved it. We just got married, so this is our first show together after being married, and it was a great night.”