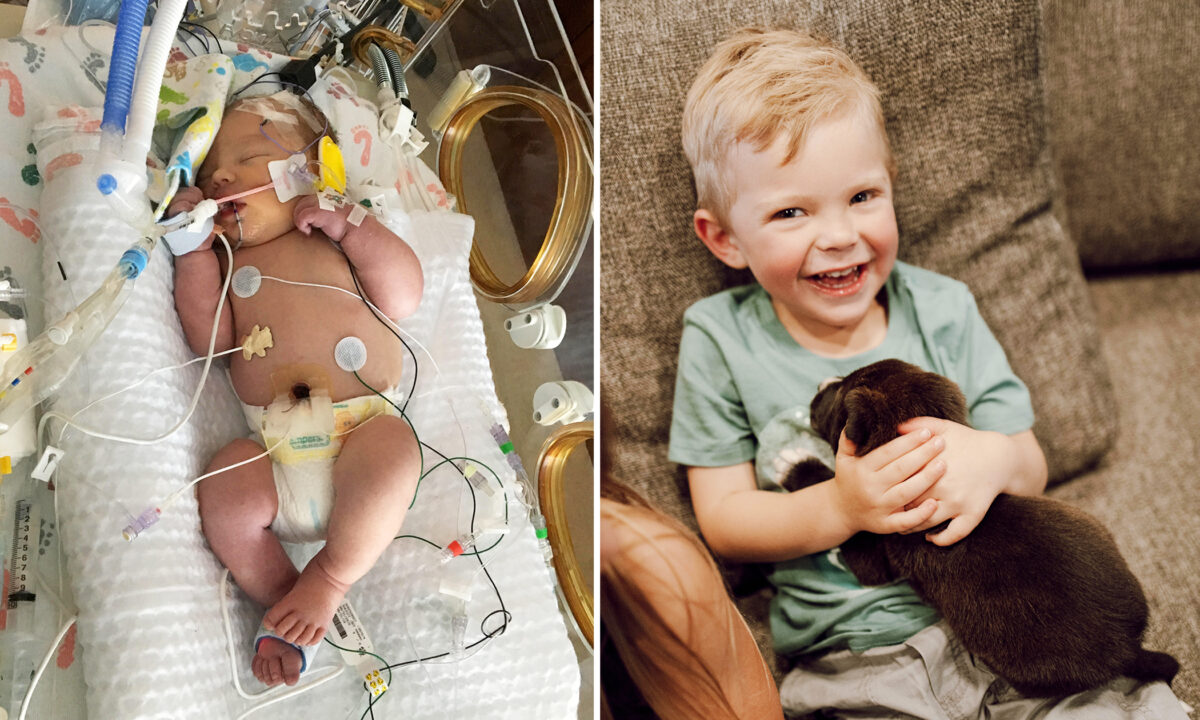 A baby boy who was not breathing at birth underwent resuscitation efforts for 20 minutes. During this period, doctors feared brain damage or cerebral palsy, or that he simply wouldn’t survive. Now, almost four years on, he’s as capable as his peers, and his recovery is considered a miracle.

Urias, the youngest child of his parents, Hannah and Jacob Sheriff, of Durant, Oklahoma, was born at Alliance Health Durant on Aug. 31, 2018—the same birthplace as his four siblings.

Hannah, a stay-at-home mom, had no idea what was wrong with her fifth child until she went into active labor.

“I carried him full term, so he was only about nine days early, which is pretty typical for all my pregnancies,” Hannah told The Epoch Times. “[The morning of] my 38-week appointment, I began experiencing a lot of pain.”

Doctors checked Hannah and the baby’s heartbeats, and everything seemed fine. The then-expectant mom was dilated five centimeters, so she was transferred to the hospital’s Women’s Center, wanting a natural birth. However, after a contraction that lasted six minutes, the birth plan took a turn.

“I’m a Christian and spirit-filled … I just began having an urgency to be attentive,” said Hannah. “I told my nurse, ‘I know the plan wasn’t an epidural, but if I need to have one, that’s okay; whatever it’s going to take for him to be delivered healthy.'”

With approval from Hannah’s doctor, she had the epidural, as it was discovered that the baby was not handling the labor very well. It was then that the room grew foggy. Hannah has since learned that her delivery team was struggling to find the baby’s heart rate and that there were complications. She was then moved to the operating room for an emergency Caesarean section.

“I did not hear him cry, I didn’t hear anything,” said Hannah. “He was dead; he was not breathing. I didn’t get a visual look at him because of the way they covered him … they weren’t telling me anything.”

Hannah had suffered a placental abruption—a serious condition in which the placenta separates from the wall of the uterus before birth. Baby Urias had been deprived of oxygen as he was born.

Jacob, a lead pastor at the church, recalled: “When I walked into the operating room, I saw our son and he was already limp. He had lost oxygen long enough for him to have lost all vitals … they were doing CPR on him to try to get a heart rate … it was very unnerving, it was very fearful, and of course, there was a lot going on that I don’t know.”

Hannah’s doctor insisted on pushing resuscitation efforts past the 10-minute mark, despite the baby’s rapidly fading survival odds. Their faith was activated by fear, and Hannah and Jacob prayed.

According to Jacob, the doctor was relentless and wasn’t going to stop, even though that’s counter to conventional wisdom.

“They got a pulse, but after 20 minutes, every vital organ had shut down,” Jacob shared.

Baby Urias was intubated and placed in a mobile incubator, then transferred to the specialist NICU at Texas Health Presbyterian in Plano by helicopter. Knowing it was best for their baby, Jacob set off for Plano while Hannah stayed behind to heal from surgery.

Urias suffered two seizures in his first four hours of life, one in the helicopter and one in the NICU. He was diagnosed with hypoxic-ischemic encephalopathy (HIE), brain damage caused by a lack of blood and oxygen.

Staff at Texas Health took their efforts into high gear, placing Urias on a 72-hour cooling treatment to lower his body temperature and slow his metabolism so that whatever potential damage was done in the brain didn’t get worse. Forty percent of babies that enter this treatment “sometimes don’t even come out,” said Jacob, but it was the NICU’s best chance of stalling brain damage.

They also added that, if he would ever talk or walk, it would take a very long time.

Jacob and Hannah were reunited at the NICU after 48 hours. Here, the couple were given the news that things looked bad and that it might be cerebral palsy in an extreme form.

The couple compiled a prayer of scriptures and a Facebook page, so that when loved ones and their church offered help and support, they could implore: “pray.” Their call to prayer went global.

“Was I ever unafraid?” Hannah reflected. “Absolutely not, I was very afraid. I didn’t fully understand the why. But in that moment, that’s not really the right question to ask; I knew that my son needed me to fight for him.

“I also, as a mom, felt like, in that moment, I needed to be willing to give him up … I knew in my heart I was choosing, whatever the outcome, whatever the future that was lying ahead of us, that I was going to trust God.”

With this resolved in Hannah’s heart, the parents knew that they couldn’t control the timeline of when they would see the next positive thing or if it would be all negative. However, what Hannah could do, she said, was trust the peace that surpassed all understanding.

As Urias’s life hung in the balance, a night nurse witnessed the first miracle: he opened his eyes. When Urias came out of his 72-hour cooling treatment, medics assessed that his condition was not as bad as they’d feared.

A few days later, an MRI identified “unusual activity,” but there was little to do besides wait.

“Over the next week and a half, there would be really great days and a setback,” said Jacob. “But when they sent us home, that was when they said, ‘Things are looking really great’ … his recovery was a big surprise.”

Hannah and Jacob held their baby after one week and headed home after three. They weaned Urias off his seizure medication, and his care team grew exponentially optimistic.

“They didn’t have a medical reason why he got better,” said Jacob. “They were always very cautious to give us hope. I respect them and I appreciate them for that, but my wife and I, our families, and our church were pretty obstinate.

“We know the power of prayer, and we stood in faith, and we got our church to pray with us. The doctors acknowledge that it really is a miracle.”

Urias’s progress was monitored by Dallas area nurses for a year. He then began to hit developmental milestones.

Hannah said that the nurses were “amazed” when he learned to crawl and grew muscle definition, debunking their fears of cerebral palsy.

Hannah and Jacob rested easy for the first time since Urias’s birth at his one-year checkup; their pediatric neurologist delivered the life-changing news that Urias was “absolutely normal,” and would need only a couple more visits before kindergarten.

The toddler began walking at around 13 months, just as his siblings had, and began to talk “right on schedule.”

“We don’t have to see specialists anymore,” said Hannah. “We do like our other kids; we take them to their routine, yearly checkups … but there’s been no issues.

“You would not know that he went through what he did if you didn’t know his story.”

Soon approaching his 4th birthday, Urias today is a talkative tot with highly developed language skills. He has weaned off his medications and is on par with his peers, developmentally.

Hannah said: “We’re very humbled by the grace of God, and even through this story, encouraging others that when times are tough … we live in God’s word as the final word.”